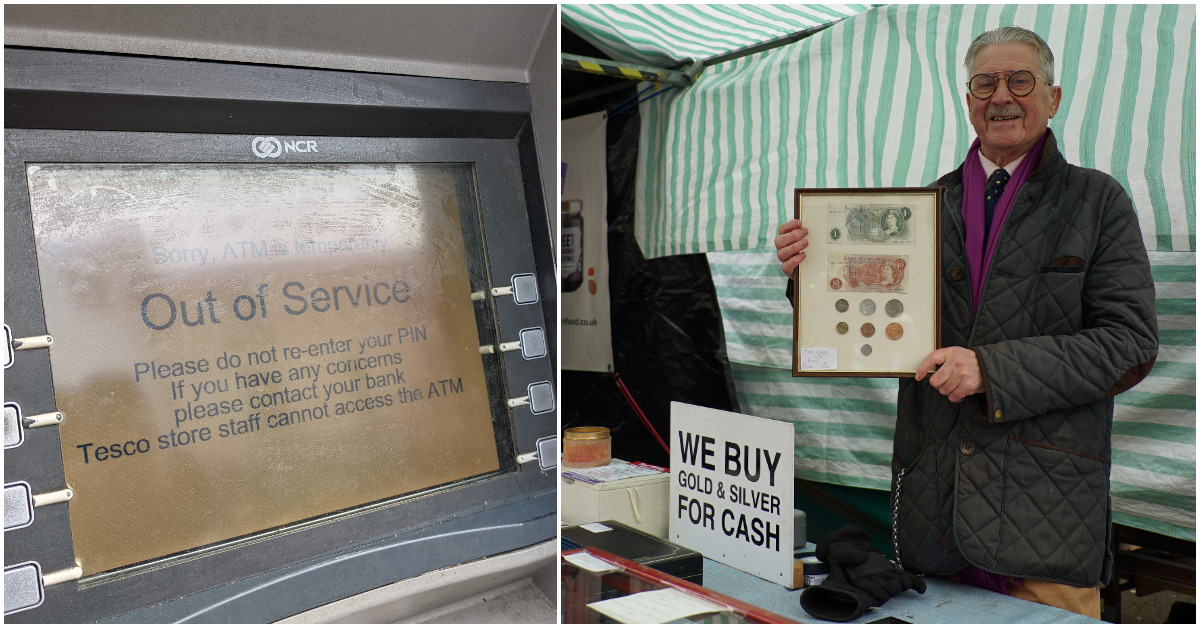 Ted Wray is one of a number of stallholders who do not have a card machine.

Stallholders have vented their frustration over an ATM outage in Knaresborough’s town centre where there is no longer a bank.

Both the cash machines at the Tesco Express and the Sainsbury’s Local on the High Street are out of service today. They have reportedly been out for the past five days.

Anyone in need of cash either have to queue up at the busy Post Office in the town or head out for a 40 minute round walk to the ATM at the Co-op petrol station on Manse Lane.

Halifax closed its Knaresborough branch in March 2021. Halifax blamed changing customer habits for the closure, which left the town’s 15,000 residents without a bank.

The lack of cash availability has been felt particularly keenly today at the Knaresborough market. The market is held every Wednesday from 7.30am to 3pm in the market square.

Ted Wray, who has sold jewellery and old cash at his stall for the last three years, told the Stray Ferret:

“I think it has put people off buying things at the market today. Some of my potential customers ask if I take cards but it’s not possible when I am selling items for a couple of pounds.

“It has been very difficult. All of us in the market who do not use card machines have felt this as an issue.”

“The ATMs have been out since Saturday. Customers have also been complaining about it, the machines don’t have any cash in them.

“It has been putting a lot of people off. We have no banks and only one post office where everyone has been sent.”

Jared Clark, who runs a bakery stall on the market with a card machine, said:

“We have had a few customers who have said they can’t get any cash, so it is not ideal. The only place is the Post Office where people often have to queue.

“Footfall is down at the moment so it is not great. Knaresborough deserves better, we need more cash points or a bank.”

The Stray Ferret asked both Tesco and Sainsbury’s why their ATMs are currently out of use. We had no response by the time of publication.

“We are aware of an issue affecting the ATM at Tesco Knaresborough High Street that has caused the machine to be temporarily out of service. We are working hard to fix this and expect to have the ATM available for use again later this week. We are sorry for any inconvenience this has caused our customers.”

Shoppers in Harrogate can get free weekday parking after 3pm at the Victoria multi-storey car park, until 23 December.