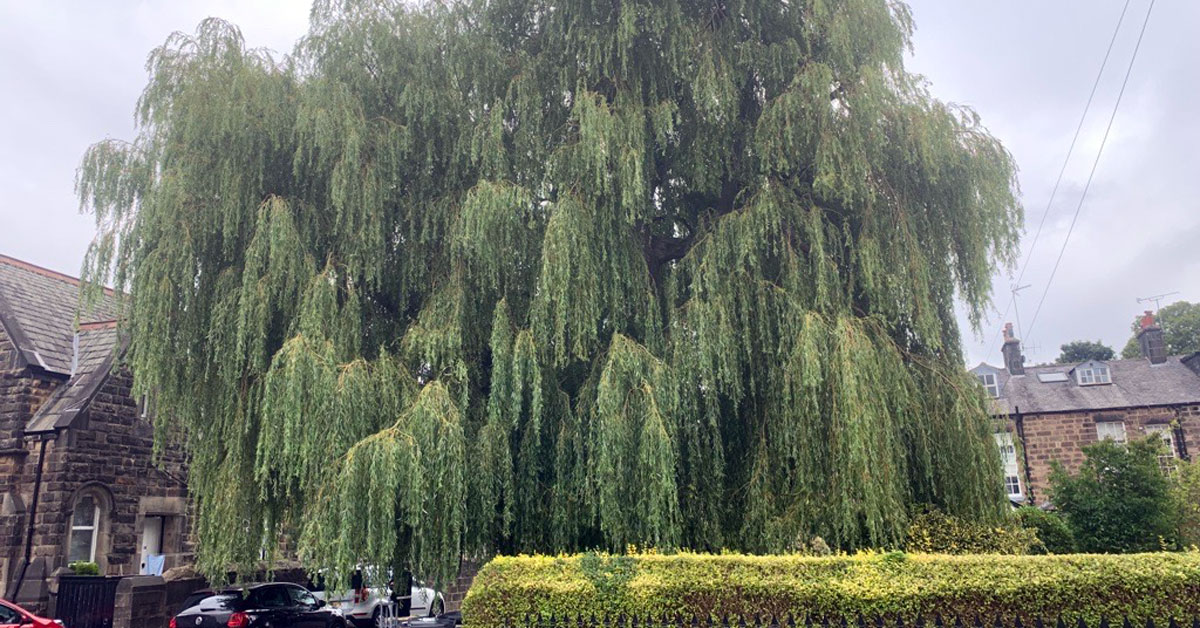 The willow tree towers over the street.

A 100-year-old weeping willow tree in a garden close to Harrogate town centre could be felled.

The tree, which is in the front driveway of a house on Belford Place, towering over the street, is subject to a tree preservation order.

The home owner has applied to have the tree, which is close to St Peter’s Church of England Primary School, cut down.

A report by arboricultural consultants JAC Limited on behalf of the tree owner says there are “genuine concerns over the condition and risk of the tree in question, due to its close proximity to a school and now
heavily pedestrianised thoroughfare of Belford Place”. It adds:

“The tree is extremely large for its restricted location, and is now considered to be out of
equilibrium with its surroundings and cannot be safely retained in its current form.”

A sonic assessment of the tree found it was “generally decayed” at the base, the report adds.

It recommends it should be removed and an “appropriate tree be planted in its place”.

Harrogate Borough Council has previously rejected an application to cut down the weeping willow.

The council will now send its own expert to assess the tree before making a decision.

Harrogate Civic Society has said it would like to see “a less drastic solution”.

Henry Pankhurst, a member of the society, told the Stray Ferret:

“We are obviously reluctant to lose trees of such amenity value.

“The sonic test shows only a minor portion of the trunk thickness to be good wood and a large area beginning to decay with the remainder in poorer condition.

“However, we would not like to take this as a definite conclusion that the willow tree should be felled if some other less drastic solution would allow it to survive safely for a reasonable while longer.

“We shall watch for an opinion from the council arboriculturist which would help us to come to a more precise view.”

The Stray Ferret reached out to the homeowner but has yet to receive a reply.