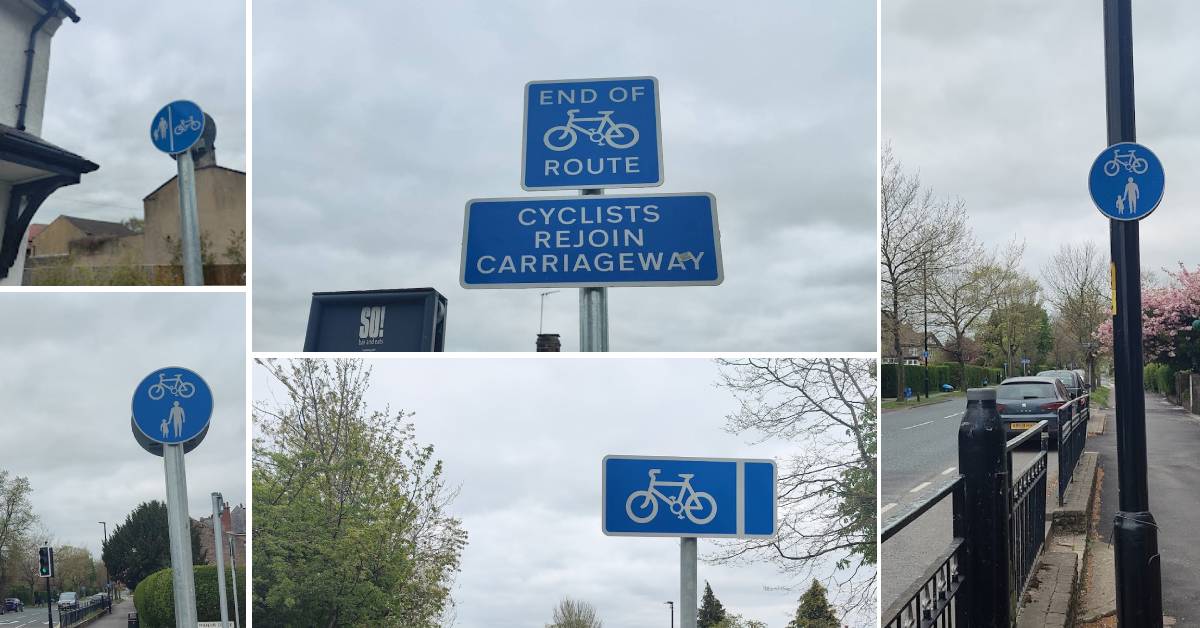 Some of the 37 new signs that have been erected

The Otley Road cycle path has seen drastic alterations to the road and pavement but the sheer number of signs erected has been called confusing and damaging to Harrogate’s visual appearance.

North Yorkshire County Council, which is behind the £2m scheme, has erected 37 new signs to let cyclists, pedestrians and motorists know where the path starts and ends.

It means blue and white signs dominate the eyeline on a stretch of road in Harrogate that is less than half a mile long.

Critics of the scheme suggest if the cycle path had a better or more streamlined design, it wouldn’t need so many signs.

Harrogate Civic Society was formed in 1971 with an aim to preserve the appearance of the town.

Members of the group walked the cycle path route last week and were disappointed by the volume of signs.

Its chair, Stuart Holland, said the group would like to see some of them removed.

“We think there are too many signs. We’d welcome a reduction. We think there needs to be more clarity about where cyclists go as it is confusing. As a society, we encourage less signage in the town.”

Otley Road resident Chris Dicken has been an outspoken critic of the scheme since it was first proposed several years ago.

He said he warned North Yorkshire County Council about the number of signs but “they didn’t listen”.

“My argument is that it’s not much of a design if you need that many signs to alert people to the cycle path and then of course many cyclists either don’t understand it’s a one way system or choose to ignore it. That’s not even taking account of the impact on the environment in a town that is proud of its heritage and its green credentials.

“Most towns are looking to reduce street clutter. Here, North Yorkshire County Council are adding lots to it. This is all in a short distance too, with many more to come for the next phase.

“To me, as a main artery into the town, Otley Road should be of a high standard and make visitors welcome with a tree-lined boulevard. Instead we get grass and tree removal and a plethora of blue and white signs. It has certainly disturbed the ambience of my road.”

Mr Dicken will meet North Yorkshire County Council next month as a representative of Harlow and Pannal Ash Residents’ Association to discuss the next phase of the cycle path, which will connect Arthur’s Avenue to Beech Grove.

He is pessimistic that the number of signs will be reduced for phase 2 because the route has already been designed.

However, he is more hopeful for phase 3, which will connect the route up towards Cardale Park. Mr Dicken hopes to see a “better-designed” route and far fewer signs.

“All signs within the Otley Road cycle way scheme are as indicated in the designs presented at the public engagement event in 2019 and subsequently published on our website.

“Appropriate signage is important in mitigating the risk of conflict between cyclists and pedestrians using the space. The signs, all of which are within highway land, were identified as necessary to the improvement scheme.

“We will be inviting stakeholders, including representatives of the residents’ association and the civic society, to a workshop in May to discuss detailed designs for phase two of the scheme. The workshop will also present details of the wider Harrogate sustainable transport packages, recognising the key links to the Otley cycle route that will be made in the future.

“Mr Dicken has previously raised concerns about aspects of the scheme, including conflicts between road users, though not signage. We have corresponded about those concerns. After the engagement event in 2019, our designers met Mr Dicken on site to discuss the designs in detail.

“We have invited Mr Dicken to meet officers again after next month’s workshop, should he wish to discuss any of his concerns further.”