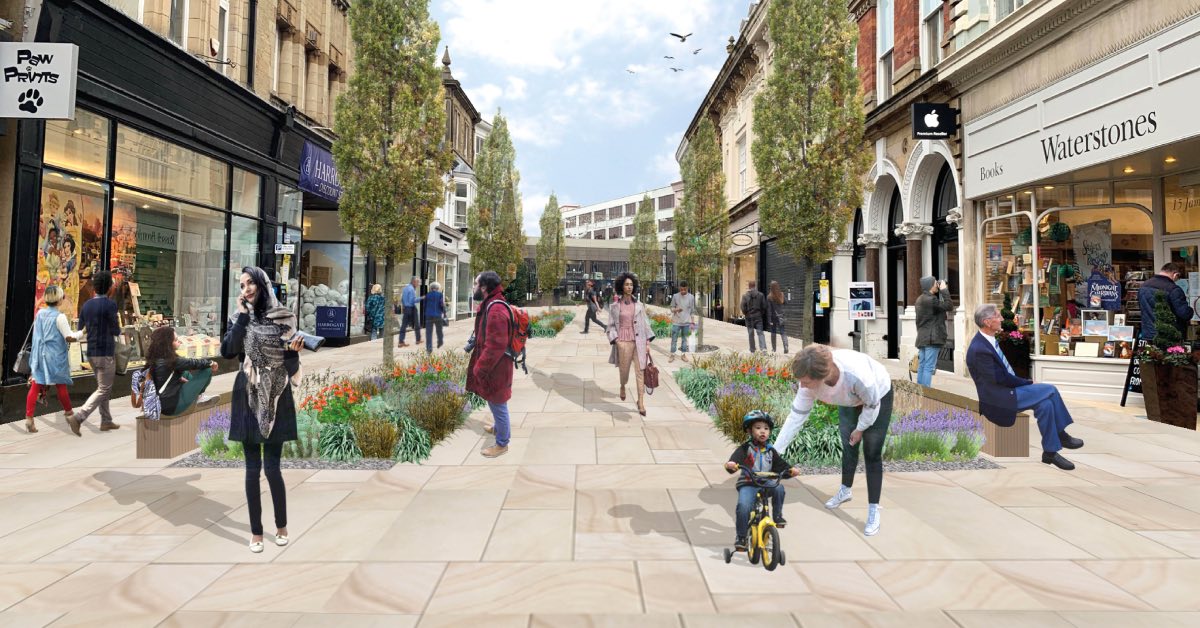 How a pedestrianised James Street could look.

Detailed designs for Harrogate’s controversial £7.9 million Station Gateway project are to be drawn up, it was agreed today.

Councillors voted to press ahead with the next stage of the scheme, which could see the pedestrianisation of James Street and Station Parade reduced to one lane of traffic,

The project, which aims to create a more attractive entrance to the town with greater priority for pedestrians and cyclists. is part of the government’s Transforming Cities Fund.

There are similar projects being run in Selby and Skipton but transport officials said Harrogate has proved the most contentious due to resistance from some businesses are worried about the impact on trade.

A recent public consultation, however, revealed public support for a town centre less dominated by cars.

For Station Parade, 49% favoured an option to reduce traffic to one lane, while 27% said it should be retained as two lanes and 24% said neither option was workable.

“We have been lobbied quite strongly by the business community in Harrogate, of whom one or two members seem to think the gateway scheme is intended to make life more difficult for them. Those comments could not be further from the truth.

“The whole purpose behind the gateway scheme is to make all three of these town centres more attractive to visitors, especially those who want to come and spend money in our shops, restaurants and pubs.”

More detailed designs will now be completed before a business case is drawn up and a final decision is made.

A county council report said the impact on parking and traffic would be kept to a minimum, with just 45 out of 915 parking spaces lost.

The report also said reducing Station Parade to one lane would increase the average car journey time by 53 seconds, or by 1 minute 14 seconds with James Street fully pedestrianised.

Some businesses fear the removal of parking spaces and traffic lanes will mean busier roads and fewer shoppers.

“In the past I have had concerns about the effect of one lane on Station Parade… but frankly, when I see the benefits that a one lane scheme can deliver, I believe that small additional extra time is well worth it.”

Conservative councillor Michael Harrison, who represents the Lower Nidderdale and Bishop Monkton division, told today’s meeting it was important for the impact on traffic to be a key consideration when a final decision is made.

“This is not just about trying to persuade people to get out of the car – we have got to recognise that this area is a through-route as well.

“If there is a negative impact on travel times then we have got to acknowledge that, quantify it and make sure we have the road system working as efficiently as possible around the scheme.

“That is the right way forward and clearly we are going to do that.”

Further public consultation will now take place in autumn following the development of detailed designs and a business case.

If approved, construction could begin in summer 2022 with completion by March 2023.