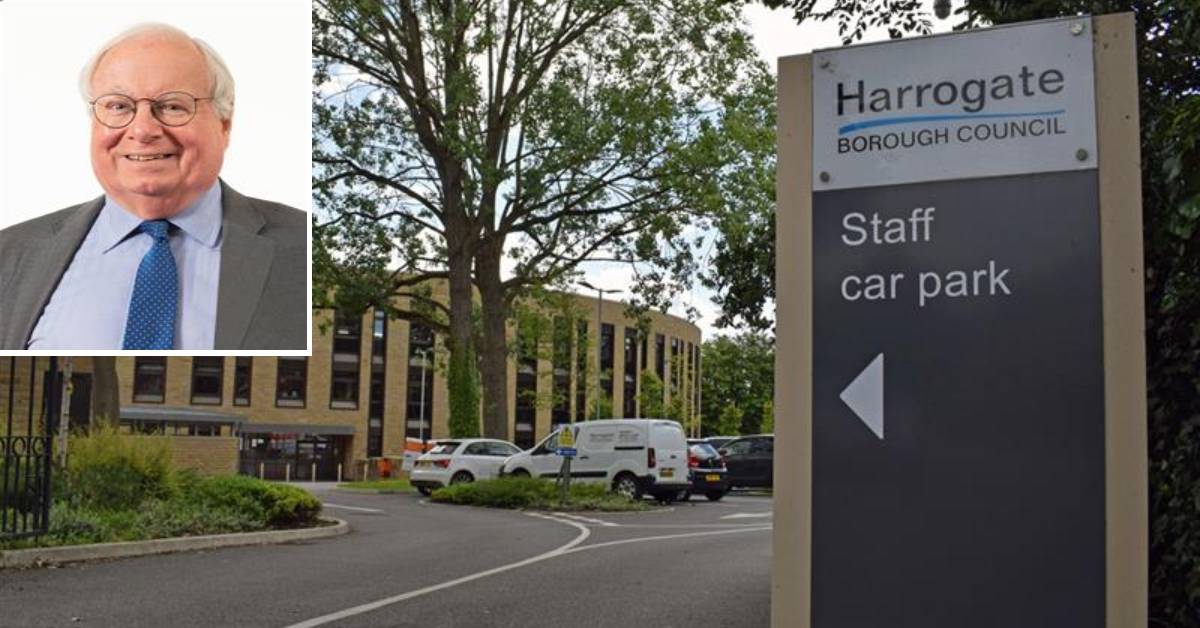 Cllr Nick Brown and the Civic Centre, off King's Road.

A councillor has compared Harrogate Borough Council‘s headquarters at Knapping Mount to the abandoned ghost ship the Mary Celeste, due to the number of staff still working from home.

The multi-million-pound Civic Centre opened in 2017 and can accommodate up to 500 council workers. However, the council is still encouraging many staff to work from home despite lockdown restrictions being removed.

Cllr Cooper said decisions about working practices should be made by senior officers rather than councillors.

“We councillors agreed to spend £13m on a new Civic Centre, opened in 2017, for officers to work in. Yet the leader now tells us that it is not members’ business to require council officers to work there.

“Prior to the covid pandemic, the Civic Centre was a busy place where I as a councillor could find the officers that I wished to speak to. Now it is like the Mary Celeste!”.

“Our Conservative Prime Minister has given a clear message to end working from home in the public sector, in order to boost the economy.

“As a Conservative-led council, I believe we should get officers back at their desks and using the Civic Centre.”

The public sector workers union Unison said it “broadly supports” the council’s decision to allow staff to work from home.

David Houlgate, branch secretary for the Harrogate district, told the Stray Ferret council staff proved during the pandemic they can work from home effectively.

“We believe the government’s Living with Covid strategy to scrap all remaining covid rules in England was reckless.

“So we broadly support this cautious approach taken by Harrogate Borough Council about returning to the Civic Centre at this time.

“Staff have demonstrated over a two-year period that they can deliver vital public services whether or not they are in the office or working from home.

“We’re confident that that can continue, though poor pay does present an ever increasing risk.”

The Stray Ferret has asked the council for the number of staff currently working from home who would normally be in the Civic Centre.

“Following the updated guidance in relation to the end of Plan B measures, staff are permitted to work from the office should they wish to or are required to do so.

“The number of staff using said office(s) differs day-by-day so it would be difficult to provide a comprehensive figure. Staff also come and go from the office depending on their job role; housing and planning officers for example.

“And while covid has seen a significant increase in staff working from home – and rightly so – many staff were already doing so. The civic centre was designed in such a way that staff could hybrid work or ‘hot desk’ if they so wished.

“Agile working is something adopted by many local authorities and companies long before covid and is one of the many benefits of working for Harrogate Borough Council.”

It's been a tumultuous week in politics - Paul thinks it's left us leaderless
https://buff.ly/3A0Bura