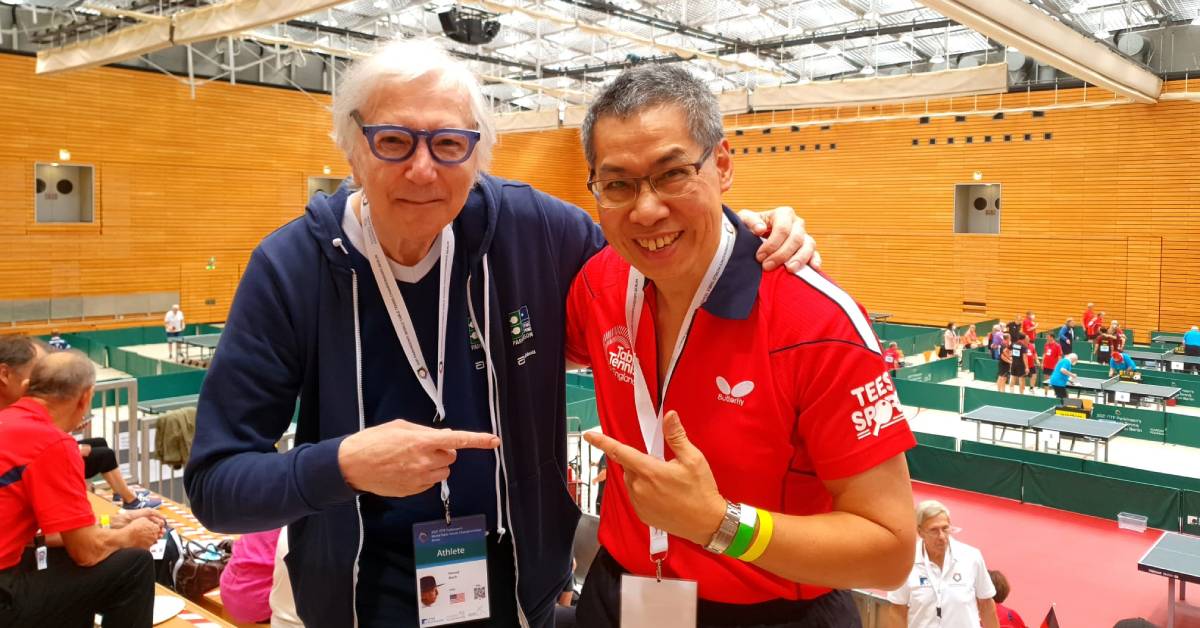 When George Chan was diagnosed with Parkinson’s disease in 2012, he was determined to carry on playing the sport he loves.

The 60-year-old from Harrogate has not just carried on — he’s excelled.

In Berlin over the weekend, George picked up a doubles gold medal and silver medal in the Parkinson’s World Table Tennis Championship.

Last month he also won a gold medal in the Parkinson’s UK Championship.

George told the Stray Ferret that winning the gold in Berlin, representing England alongside American Nenan Bach, was an emotional moment.

“When we won I hit two smashes to win the game, and we both hugged each other. It was two different nations with one common cause. It was very touching.”

Parkinson’s is a brain condition that can cause involuntary shaking.

Table tennis competitions for people with Parkinson’s are played with the same rules as traditional table tennis but with some minor tweaks, such as competitors are allowed to put their non-playing hand on the table for balance.

George went to Harrogate Grammar School before moving to Manchester to raise his family. In 2004 he returned to Harrogate through work and joined the Harrogate Racquets Club table tennis league, a sport he’d played since university.

Playing a decade after diagnosis

He was diagnosed with Parkinson’s in 2012 but was determined to carry on playing in defiance of the disease. He said table tennis helps people with Parkinson’s because you have to think and move quickly.

“When you are diagnosed the world caves in around you, but why give up what I love ? 10 years on I’m still managing to hold my own against able people in the Harrogate league. On the face of it, not a lot of people know I have Parkinson’s.

“And table tennis is the best sport for us, it’s fast for the mind and body. Some of the shots you hardly have time to think so it helps your subconscious.

“The more we can utilise natural remedies the better it is for us.”

George was inspired by fellow competitors during the week in Berlin.

“The amazing thing was how gutsy some of the players are despite lack of mobility and shakiness. It was quite amazing to see. It’s the biggest group of Parkinson’s people I’ve ever been with and they had a very upbeat outlook on life.

“Once you got onto the table it was surprising how optimistic and alive the players became. There was a common cause to help relieve Parkinson’s and find a cure. Table tennis has brought us together.”

George coaches youth classes table tennis classes at Harrogate Racquets Club on Firs Road. If you are interested in playing visit its website.