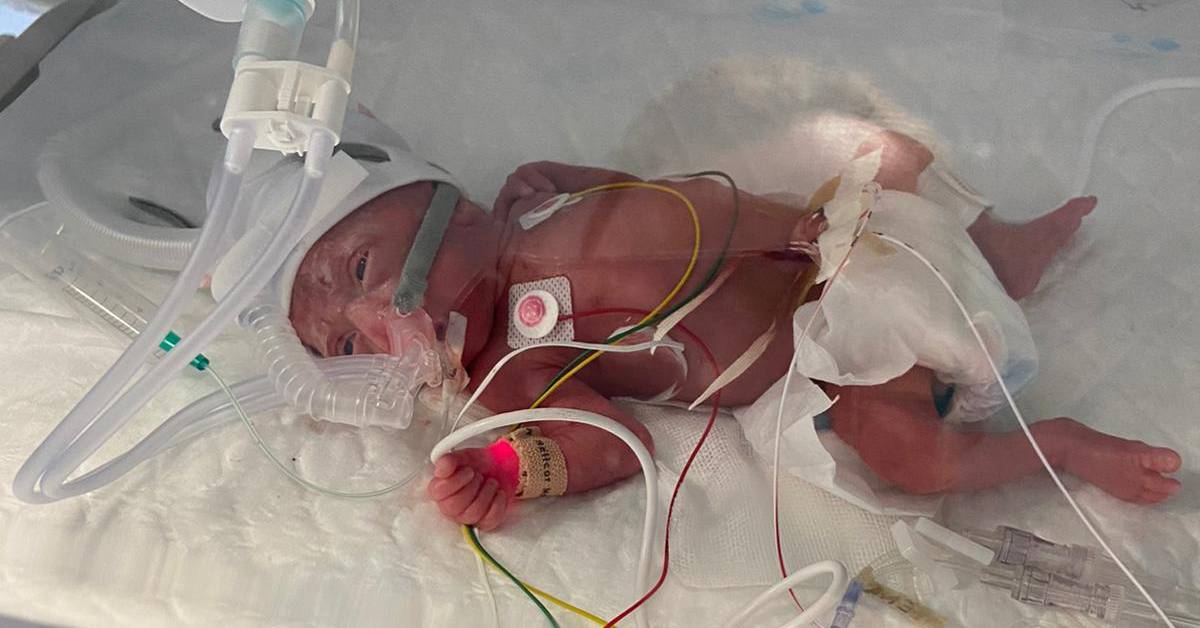 When Kim Ellis had back pain on the last day of her Lanzarote holiday, she thought she was just unwell.

She was only 26 weeks pregnant, so it didn’t even enter her head that she might actually be going into labour.

“You worry about miscarrying, but you never think your baby could come that early. It didn’t even enter my head.” 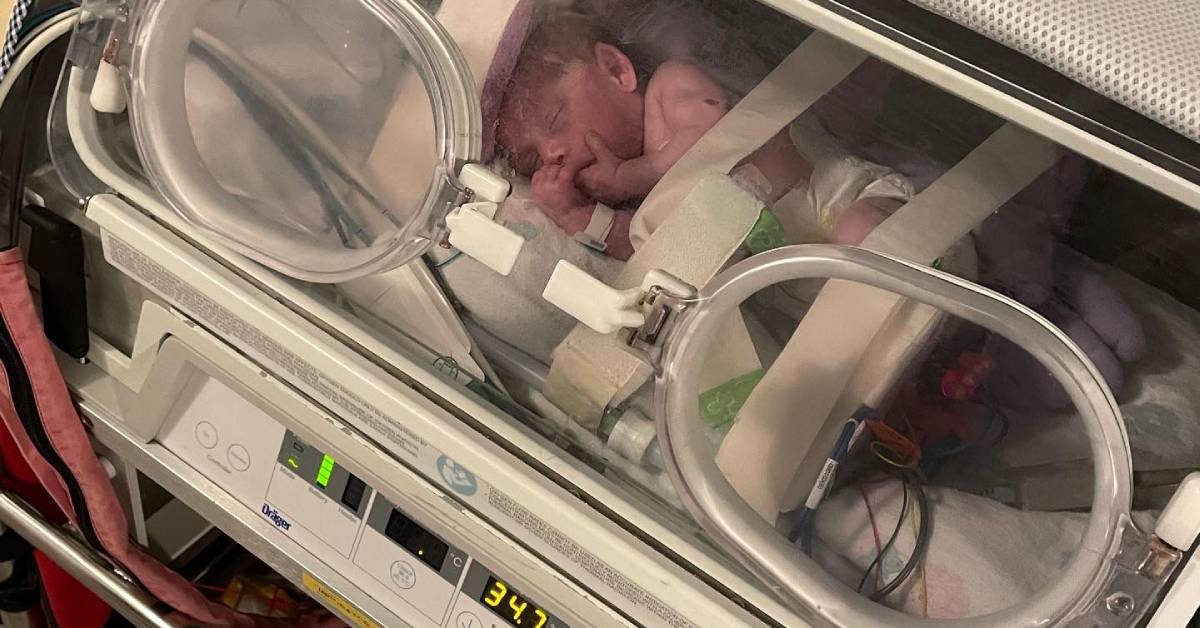 Last weekend the brave little girl was christened in Harrogate, surrounded by her family and friends.

Now, Kim is calling for more support for mums who have had premature births.

The hairdresser, who owns Blossom Hair, based at the Wellness Rooms, on Cold Bath Place, said:

“It is actually such a big thing, but not always something that is really talked about.”

When I met Kim for a coffee, I was in awe of this incredibly resilient mum who had clearly been through so much.

After cooing over a sleeping Ava for five minutes, we started chatting and I learned that her story actually began in the January lockdown of 2021.

Kim explained that she had met her partner Connor Stewart on dating website. After chatting, they decided to meet up for a walk in the New Year, just a day before the third national lockdown.

“We were in our own little bubble then. So we decided to carry on meeting up for walks, chatting and FaceTiming. So really we got to know each other quite well, because there was nothing else to do.

“We made all these plans to go on holiday and do all sorts of things.

“Then in May I found out I was pregnant. It was a complete and utter shock, as we had literally only been together for about three months.

“We discussed everything and said ‘let’s just do this’. As we weren’t even living together at that point, he moved in with me and we started preparing for the baby.”

When restrictions were eased in October last year, the couple decided to book a short break to Lanzarote, one of the Canary Islands.

“We flew on October 6. I had been checked out and was about to go into my 25th week.

“We had a great holiday. Then on our last day, I started getting a bit of back pain.”

Kim realised she could barely walk up the steps to their room.

“The baby wasn’t due until January 16, so I was wondering how I was going to cope until then. I felt like she was so low down, she was going to drop out!”

What she thought was back ache, actually turned out to be contractions, which started to come on thick and fast during the night.

“I could feel her moving the whole time, so I wasn’t concerned at all. I just thought it was me.

“But then it continued and there was definitely a pattern. It got to 2am, so I rang Harrogate Hospital to ask for advice. They thought it could be a urine infection.”

At around 8am, Kim noticed she had started bleeding. As the baby was still moving, she believed there was something wrong with her, so she decided to visit a medical centre near the hotel.

“Poor Connor didn’t have a clue what was going on. Covid rules were so strict over there, he was kept away from me.”

After being taken by ambulance to the main hospital on the island 40 minutes away, Kim was relieved to be met by a huge team of midwives and doctors.

However, her relief was quickly replaced with shock when she was told she was 4cm dilated.

“They were really positive, as obviously I was only 26 weeks. But they weren’t sure if the baby would have any health problems. However, they said she seemed really strong.”

After being given medication to stop her contractions, Kim was taken to a bed to get some sleep.

But then her waters broke.

“It was now Tuesday morning, it was 10am and I was 7cm. I stayed 7cm all day, so then they had to put me on a drip to try and induce me.

“I just got set up with gas and air when I was told I needed to push.

“They had to be careful how to deliver her as she was so small. But she was ready to arrive. She was in the right position. She was so strong, she didn’t get distressed.

“They told me not to be be alarmed if she didn’t cry as she had weaker lungs. But when she came out she was crying and looking around at everybody.” 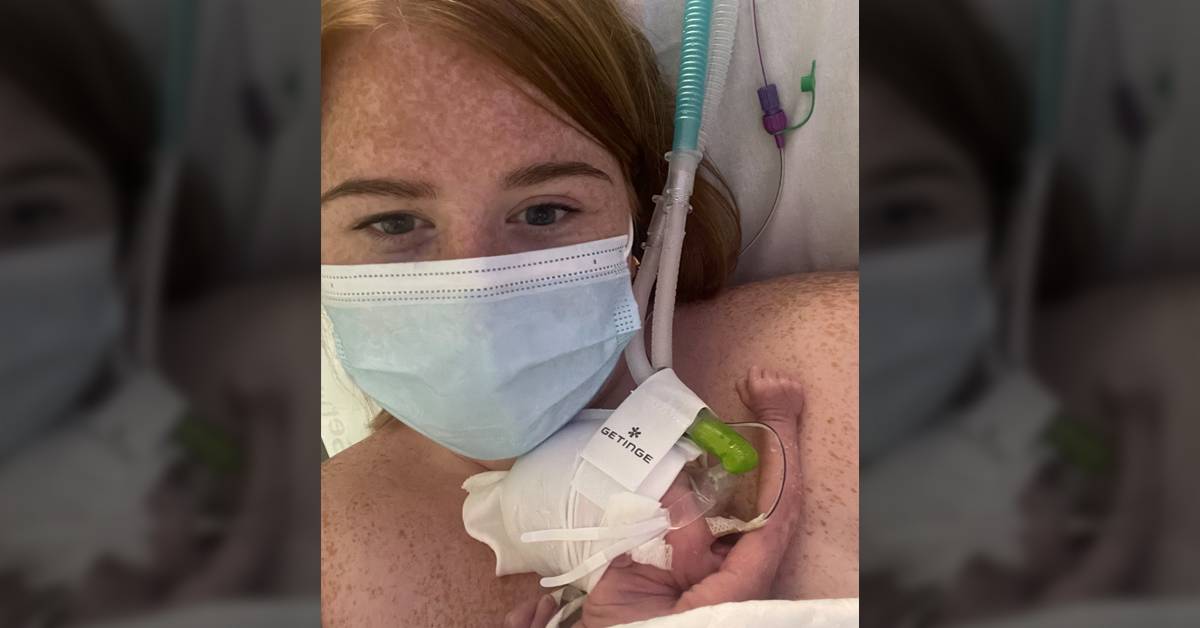 Kim cuddles tiny baby Ava at the hospital in Lanzarote.

Ava was then taken away and put on a ventilator ready for both mum and baby to be airlifted to a larger hospital on Gran Canaria, which had more facilities.

However, the doctors discovered Kim had been bleeding, so she was whisked off to theatre.

This meant that Ava was flown to hospital without her mum.

“I got to see her for about 10 minutes before she got transferred to Gran Canaria, which was really hard. But I was just so relieved she was going to get the care she needed.” 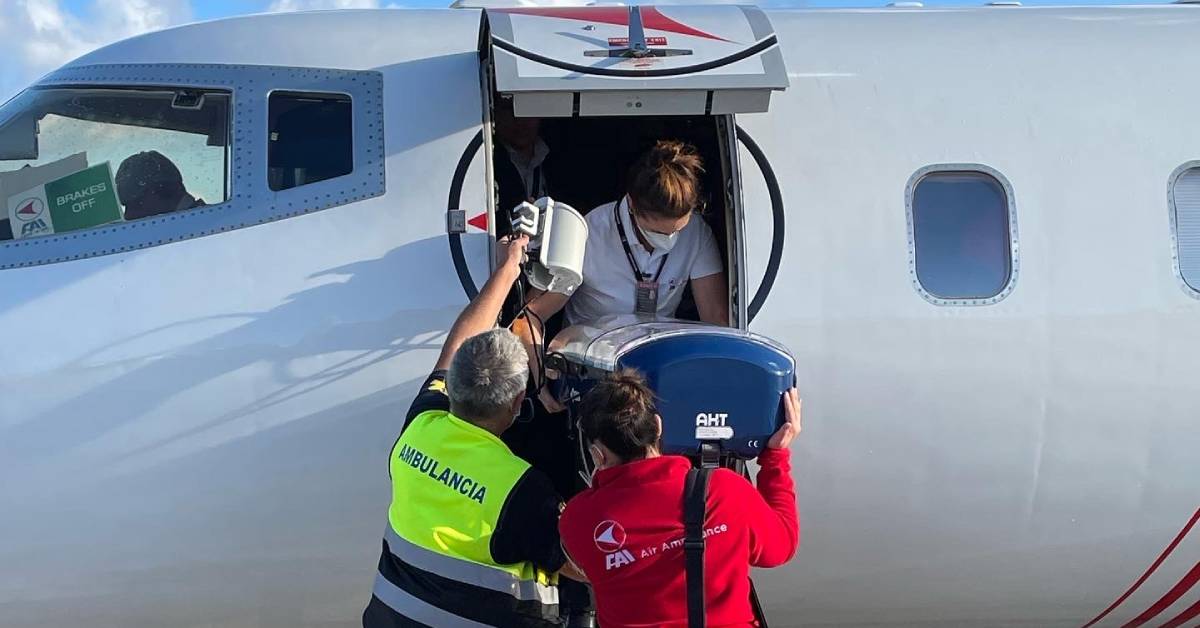 Ava is airlifted to Gran Canaria.

Just under two days later, quite remarkably, Kim boarded a standard passenger flight to Gran Canaria to be reunited with Ava.

“I don’t know how I did it. I just wanted to get to my baby. It was total adrenaline.

“It was so amazing to see her, but it was hard as she had lost weight. However, she was doing really well and wasn’t on a ventilator.

“Apart from two blood transfusions, she just did so well.

Kim stayed on the island by Ava’s side for six weeks.

“Connor had to go back to work at Avenue Bakery, in Bilton. He also had to move house for us. So I got out of that one!

“We had to get Ava an emergency passport. I was quite scared to fly her back to the UK. But the plane was like a private jet with an amazing team, which included a neonatal doctor, nurse and two pilots.

“I was so petrified, but it was like a military operation.”

Kim and Eva arrived at Leeds Bradford Airport on November 27, where a bed was waiting for them at St James Hospital.

After a nine-day stay, when Ava turned 34 weeks, they were transferred to Harrogate District Hospital’s Special Care Baby Unit.

Kim, who said she was extremely thankful to all the midwives, doctors and nurses, said:

“We came out on December 21 just before Christmas, which was lovely. To be honest, I think I was still on adrenaline, as I somehow cooked a massive Christmas dinner.” 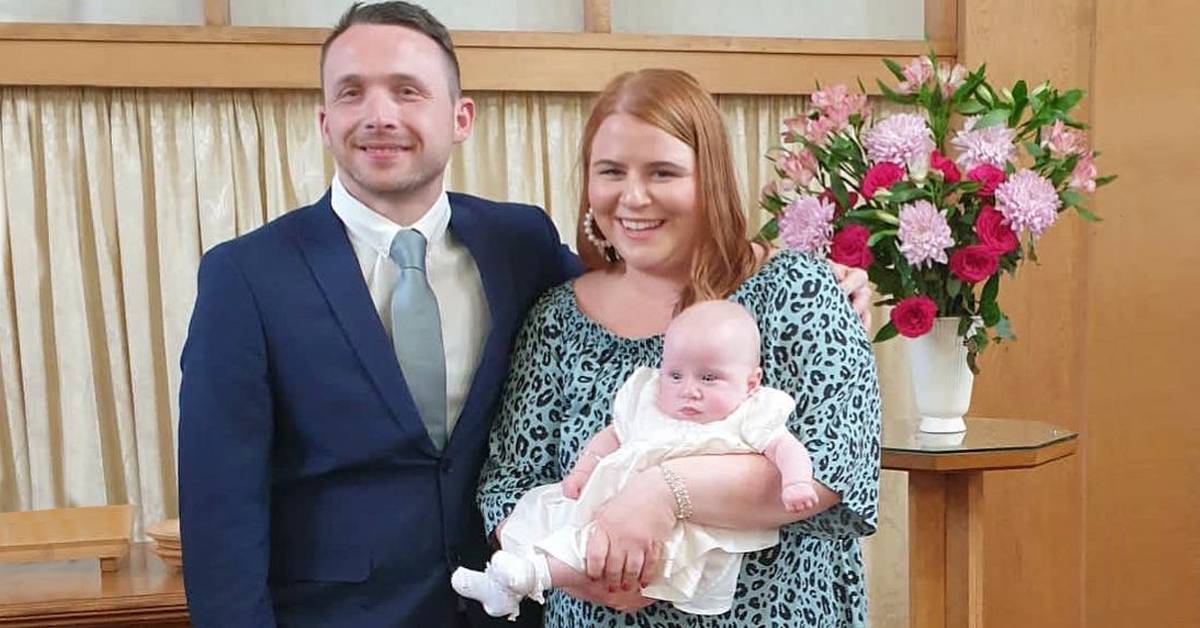 Connor, Kim and Ava at the christening in Harrogate.

“I’m absolutely loving motherhood and getting stuck in, despite a scary start.”

Kim is now calling for more awareness for premature births and would eventually like to see more support and information provided to mums.

“You don’t think you are going to give birth to a premature baby, but when you do there are things you have no idea about.

“It’s hard, because I’m going down that route of knowing when to start the weaning process. There is information out there, but it’s still so new.

“Babies are surviving more now thanks to medical advancements, so I feel like there needs to be more out there.

“No matter how small any change in your body is, you should get it checked out. Even if it’s considered normal in pregnancy.

“I kept looking things up, so in hindsight I think I knew something wasn’t quite right. But as it was my first baby and the midwife didn’t seem concerned, I didn’t think anything of it.” 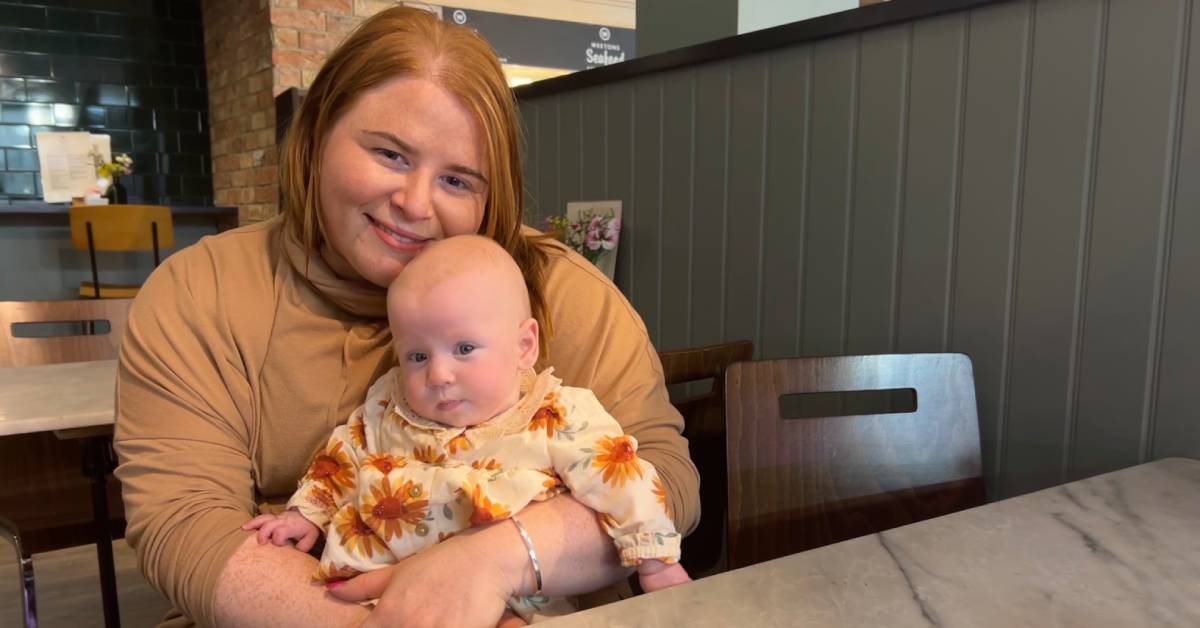