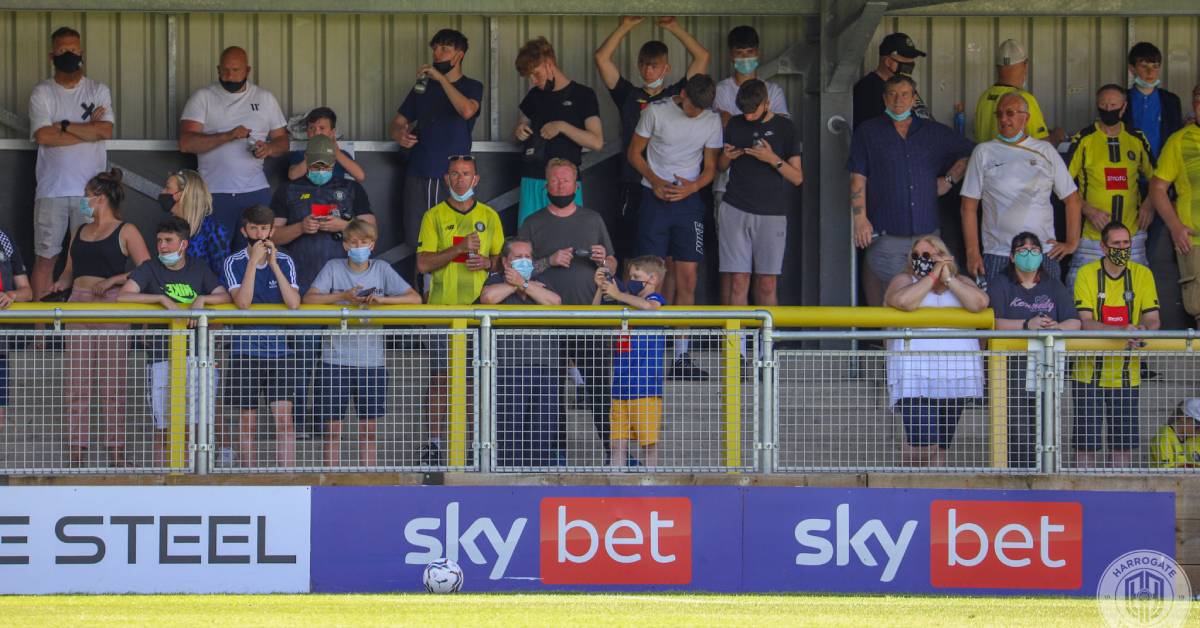 Two groups of Harrogate Town fans are locked in an increasingly bitter dispute over the launch of a new supporters trust.

Last year Town ascended to the English Football League for the first time in the club’s history and chairman Irving Weaver has ambitions to fill the club’s newly improved Envirovent Stadium on Wetherby Road with 5,000 fans.

But the club’s success and increasing professionalism on the field is being accompanied by growing pains off it.

In recent weeks, a group of Town fans has launched a trust called the Harrogate Town Supporters Trust to give supporters a voice.

Other football league clubs, such as Sheffield Wednesday and Bradford City already have fans trusts, which are democratically run and governed by the Financial Conduct Authority.

However, members of the Harrogate Town Supporters Club, which has been running for several years, believe the trust is an attempt to undermine their work.

Leaflets about the newly-formed trust were circulated to Town fans at Sunday’s pre-season friendly against Newcastle United under-23s at Wetherby Road. This alarmed many members of the supporters club, with some accusing the trust on Facebook of underhand tactics.

There was also anger that the newly-formed trust plans to put on coaches for away games, which supporters club committee member Jordan Ford has organised for many seasons.

However, the chair of the trust has said alternative away travel is needed because some fans’ drunken behaviour deters some families and fans from travelling.

Phil Holdsworth is the fan liaison officer at Harrogate Town. It’s a volunteer position aimed at improving relations between the club and fans.

He told the Stray Ferret that the trust, which says it is independent of the club, will help the club appeal to a wider supporter base and attract new supporters from as far afield as Malaysia and Vietnam.

Much of the supporters club’s anger towards the trust is due to a disagreement over when it learned of the trust being set up.

On Monday, the supporters club committee issued a statement saying it had only become aware of the trust’s formation six weeks ago.

However, Mr Holdsworth said he had a meeting with members of the supporters club in November last year when he explained how it could apply to become an affiliate of the FSA , the national body that represents football supporters.

He claims the supporters club decided not to proceed with the idea.

“I assumed they would consider it but I never heard or saw anything, Why are they not giving their members the full picture?”.

Mr Holdsworth was also advising a different group of fans on how to become a trust, which led to the formation of the new organisation. He said the fallout has led to “aggressive” criticism of him online.

He praised Mr Ford, of the supporters club, for organising away game travel but said many fans “don’t appreciate their drinking habits”.

He added he hoped the two sets of fans’ differences could be resolved:

“Nobody wants this pain and heartache. Animosity will cause division. It’s in everyone’s interests to work together.”

Best interests of the club

Clare Bridge, chair of the newly formed trust, told the Stray Ferret she too hoped the two groups could put aside their differences for the good of the club.

However, she said she would not take her 12-year-old son on the supporters club’s bus due to what she called “drunken behaviour”.

“Lots of families are being put off. I would never, ever, get on the bus.”

Ms Bridge said members of the trust were approached by Harrogate Town about forming the organisation and a more collective voice would give fans greater influence in how the club is run.

“It’s happening so it would be nice to work together. There’s always a solution.”

Supporters club committee member Katherine Swinn released a statement on behalf of the committee on Monday that aimed to assuage fears the group would be replaced.

She told the Stray Ferret members were unhappy about a “lack of communication” over the way the trust had been set up.

“[It was] essentially due to the lack of communication, the way it has been set up and the continued insistence that we were informed in advance prior to the meeting in early June.

“The supporters club was not approached at any stage about becoming a trust either by Phil Holdsworth, the club or anyone else.”

She said there was “room for both” a supporters club and a trust.

“It is common for league clubs to have both trusts and supporters clubs. They are able to exist and run side by side. Ultimately whether it’s a supporters club or trust the main aims are to support the club, look after the fans and also grow the fan base too. There is room for both.”

Ms Swinn said for the past three seasons the club has put on family-friendly coaches alongside its usual coach for many away games. For the upcoming season, this will also include most games in the north of England.

“Our supporters are fully aware that they are representing both the club and the supporters club when travelling to away matches and the committee will act on behaviour which we consider to be inappropriate and/or which may impact on the reputation of the club, or supporters club.”