0 Items
History: Where’s the vision, where’s the hope?
by 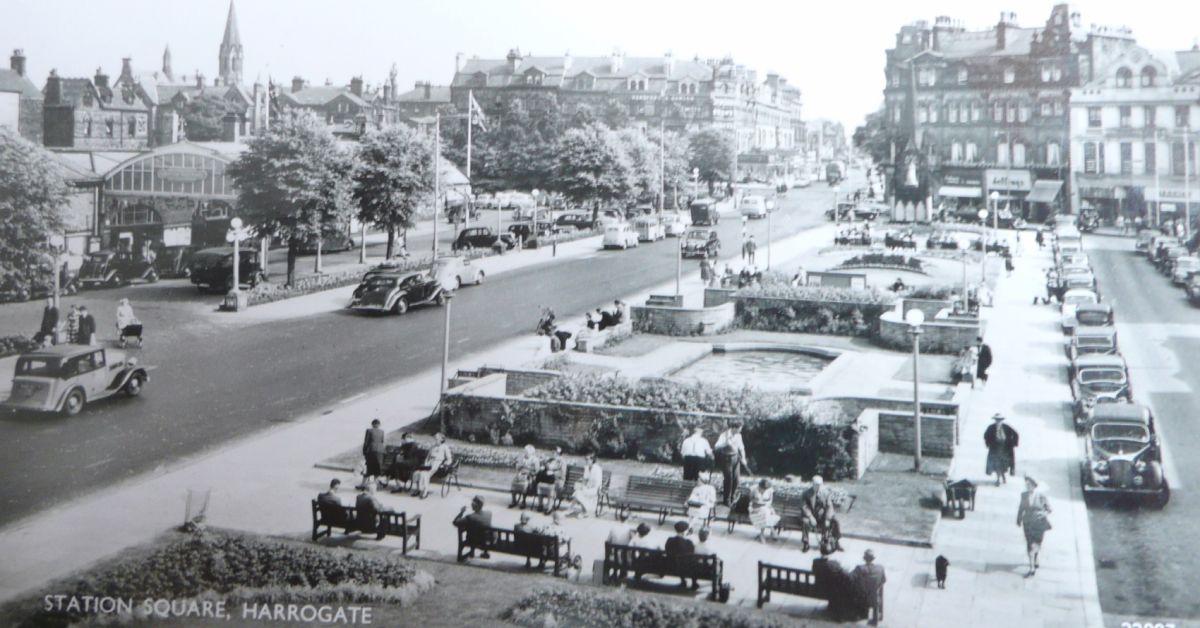 The best way forward for any society that has come through a dark time is to offer a vision of hope and recovery – and more importantly, a straight line to it.

After the terrible years of the Great War of 1914-1918, the authorities in Harrogate asked the best people qualified to come up with answers on how the town should recover – the people themselves.

Of the several local organisations to respond, none had better knowledge than the Harrogate Medical Society, which after discussions with other groups, such as hoteliers, traders, residents and local societies, published a list of suggestions to aid recovery and promote the attractiveness of the town.

At the same time, the council asked mineral well expert Professor Smithells to select essential aspects of his wartime study of the town’s mineral waters, to assist the initial recovery process of the town’s main business – the spa.

Within weeks of the November 1918 armistice, the recommendations were ready, and their essential points were that Harrogate must be made more attractive to visitors to ensure the economy not only survived, but prospered.

Chief among these recommendations were:

[1] Shopping should be made more agreeable by protecting shoppers from sometimes severe climatic conditions, such as excess rain or sunshine, and that the ‘colonnading’ or erection of glazed pavement canopies along Royal Parade, Montpellier Parade, both sides of Parliament Street, both sides of James Street and Crescent Road would not only achieve this, but would add greatly to the town’s beauty as well as the comfort and convenience of visitors, and benefit of shopkeepers.

[2] Landscape improvements to Crescent Gardens; Station Square, where recent building development had been of a tawdry nature; the circular garden in front of the Prospect Hotel which could receive a permanent war memorial; the gardens in Victoria Avenue. Every one of these improvements had been implemented within 10 years.

[3] Better use to be made of the The Royal Hall’s gardens. Here, several hard court tennis courts were constructed, that allowed the Davis Cup matches to be held there.

[4] More regular music recitals in the gardens of the Royal Hall and Crescent Gardens. Again, this was implemented, especially after the 1933 completion of the Sun Pavilion.

[5] Improved lavatory accommodation, particularly on Harlow Moor, in Low Harrogate and Station Square. Again implemented, with about six new sets of conveniences being provided across the town.

Other recommendations included: tighter regulation of cab and taxi fares, better control of the dust nuisance, a continuance of the excellent standard of advertising the town, improving regularity of Pullman service, and the erection of a new Pump Room to the right of the entrance to Valley Gardens – this last, perhaps fortunately, was eventually abandoned.

In 1920, a school for training staff at the Spa was opened, which brought considerable positive publicity to the town, and which succeeded so well that other spas were soon sending their staff to Harrogate for training.

In the past, the bottling of Harrogate’s mineral waters had been an often contentious matter, with opponents arguing that if people could buy Harrogate Water in Aberdeen, Bristol or Manchester, they would not need to visit the town and would thus deprive the economy of significant income.

But supporters argued that bottling would open up a large market by making the waters available to those who would never be able to travel to Harrogate, and that in addition, bottling was a wonderful opportunity to publicise the town’s name. But in 1919, the corporation changed tack, and resolved on 21st January 1919 to establish a table water industry.

Although some of these recommendations were never achieved, many were, and this gave people a sense of vision and hope for the future, much positive publicity being provided by the national press, for which Harrogate had become ‘the Nation’s Spa’.

At the end of the Second World War, Harrogate faced completely new problems, most of which arose from the acute shortages of materials necessary to aid reconstruction, and the decline of the British spa industry that came after the introduction on July 5 1948 of the new National Health Service.

Despite these barriers, Harrogate’s council investigated several proposals to secure the spa economy, and encourage the growth of new industry, including office and retail development, and above all to create an atmosphere of hope.

October 1946 saw the council encouraging the formation of a ‘Friends of Harrogate’, which would strive to enhance and promote the town. In July 1947, Harrogate’s brilliant publicity and entertainments manager advised the council that during the previous six months, 33 conferences had brought between eight to 10,000 visitors to the town, and that this was the way forward.

Then, in 1949, the public learned that Harrogate was set to become the national centre for the study of arthritis and rheumatism, with visits from the Minister of Health planned. At the same time, the fringes of the Stray were planted with bulbs and fairy lights hung in its trees, to add to the beauty of the area.

More attractions were planned, and on June 27 1949 the council resolved to start a scheme to convert the Royal Pump Room into a museum to attract visitors. These were but a few of the steps taken by the council to revive the town’s economy and give people a sense of optimism.

Now, we have talk about tinkering with further one-way systems for traffic, which is inherited from the council’s foolish 1970 one-way experiment that interrupted the two-way flow between Spacey Houses and New Park with one-way flow between West Park and Parliament Street, an action which forced through traffic into King’s Road, Cheltenham Parade, Station Parade, and York Place. This is why they are still trying to make something of Station Parade. This was why all the trees have vanished from King’s Road to Cheltenham Crescent to Station Parade (see photo). 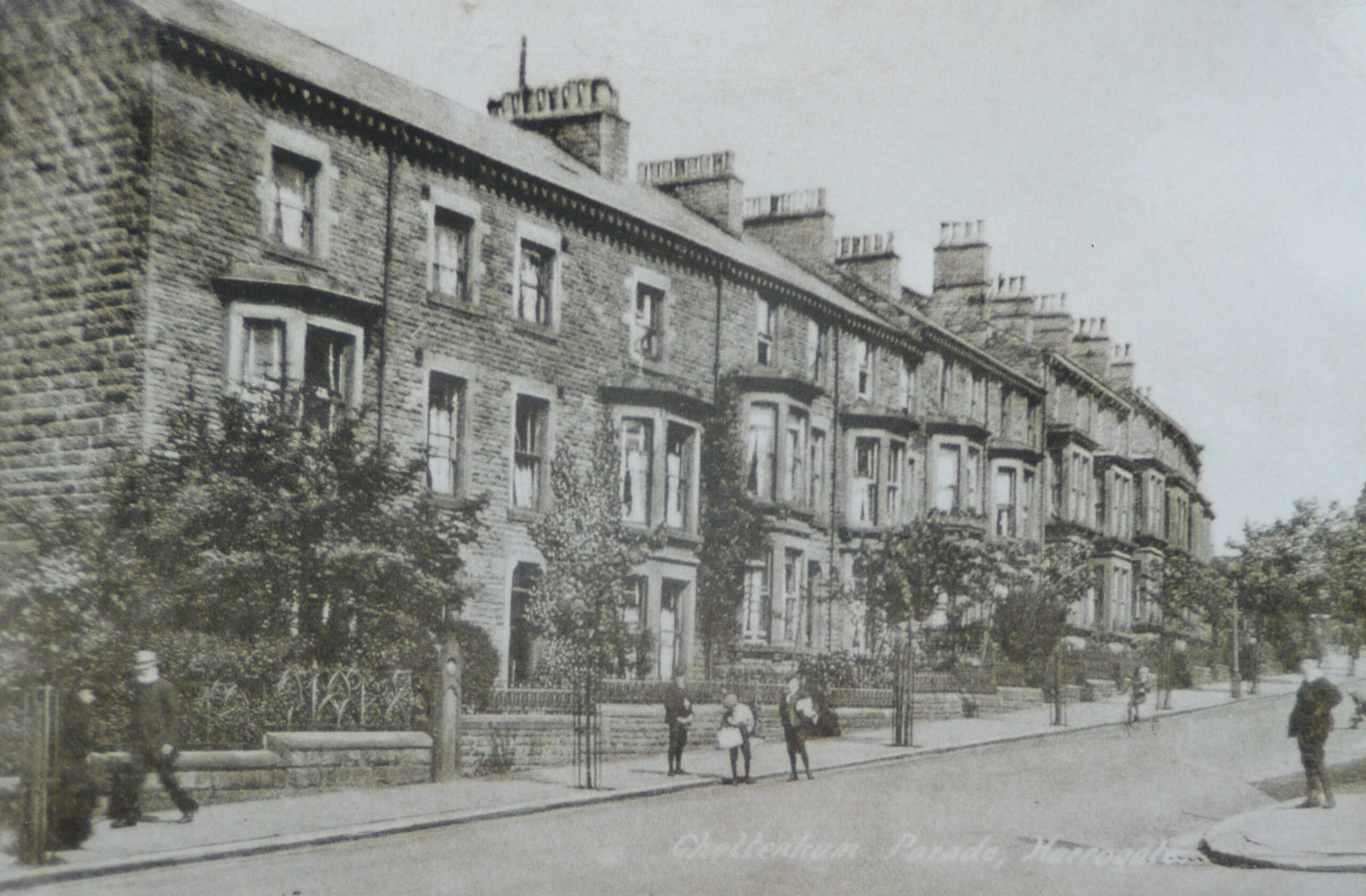 The plan for this new Harrogate ‘Gateway’ talks about the Station Square area being a gateway, something it always was, until the council allowed the railway station to be destroyed in 1964, as my accompanying photo shows. 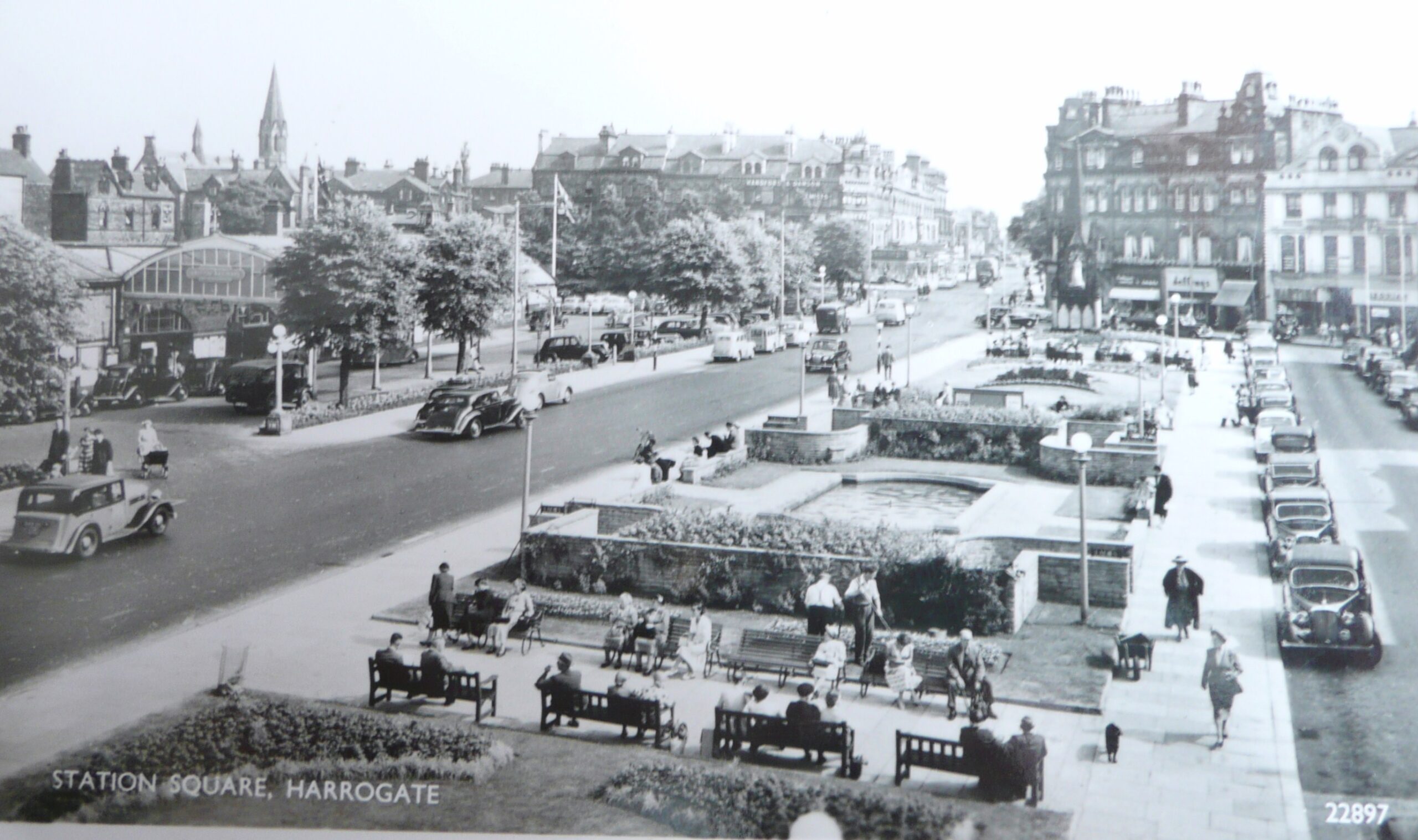 Afterwards, when architect David Cullearn designed a public event arena outside the Victoria Centre with a fountain (see photo) it was the council that weakly allowed a new owner to infill the arena, destroy the fountains, and use the new arid forecourt to display cars or host fast food stalls with their backs to the main exit of Harrogate Railway Station. 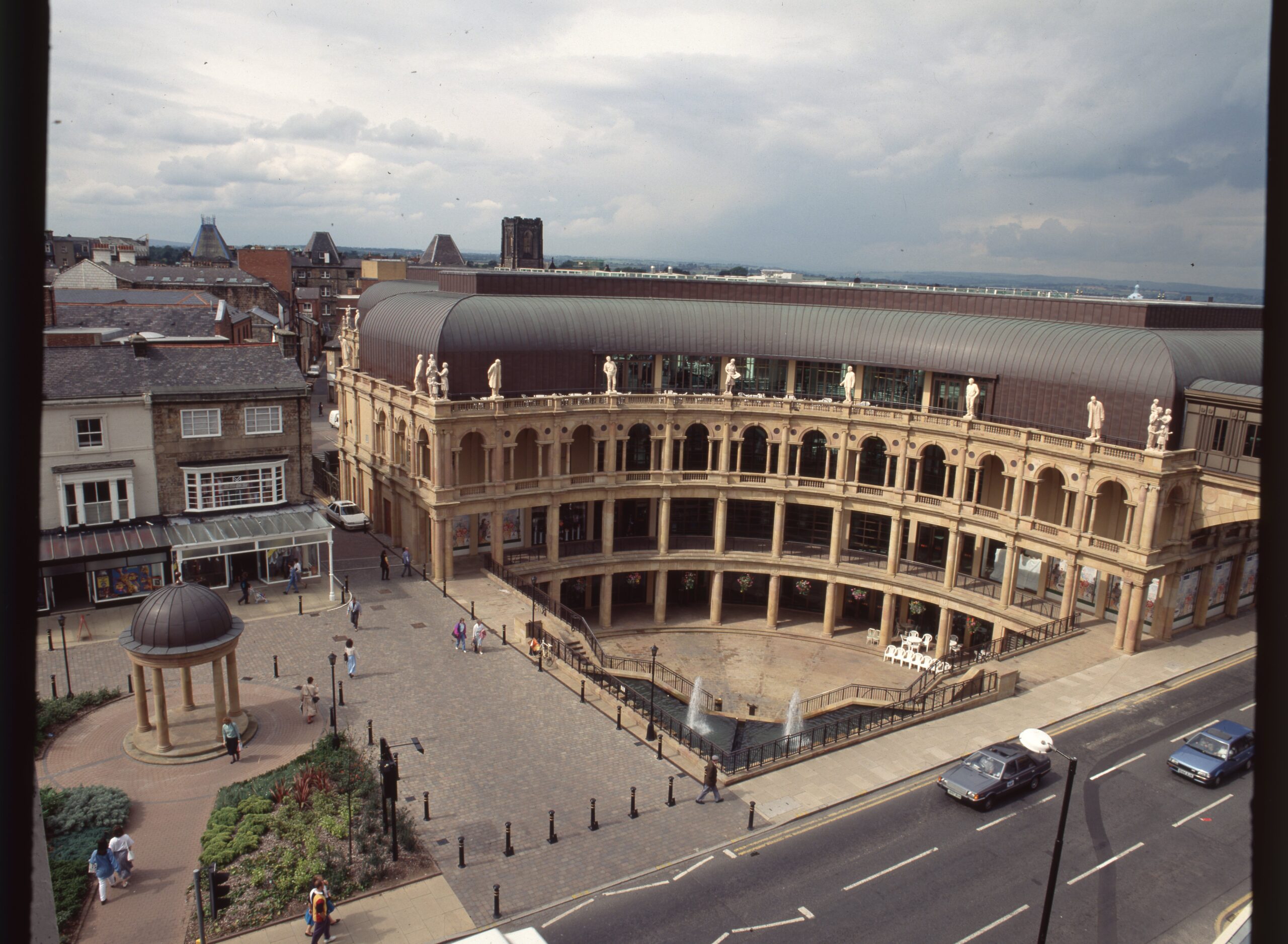 The latest drawings of the proposed gateway also show the Victoria Centre with a canopy around it, a beautiful original feature (see photo) which was destroyed with the council’s authorisation when they allowed the then-owner to extend the ground floor retail space, which wrecked architect Cullearn’s useful covered walkway. 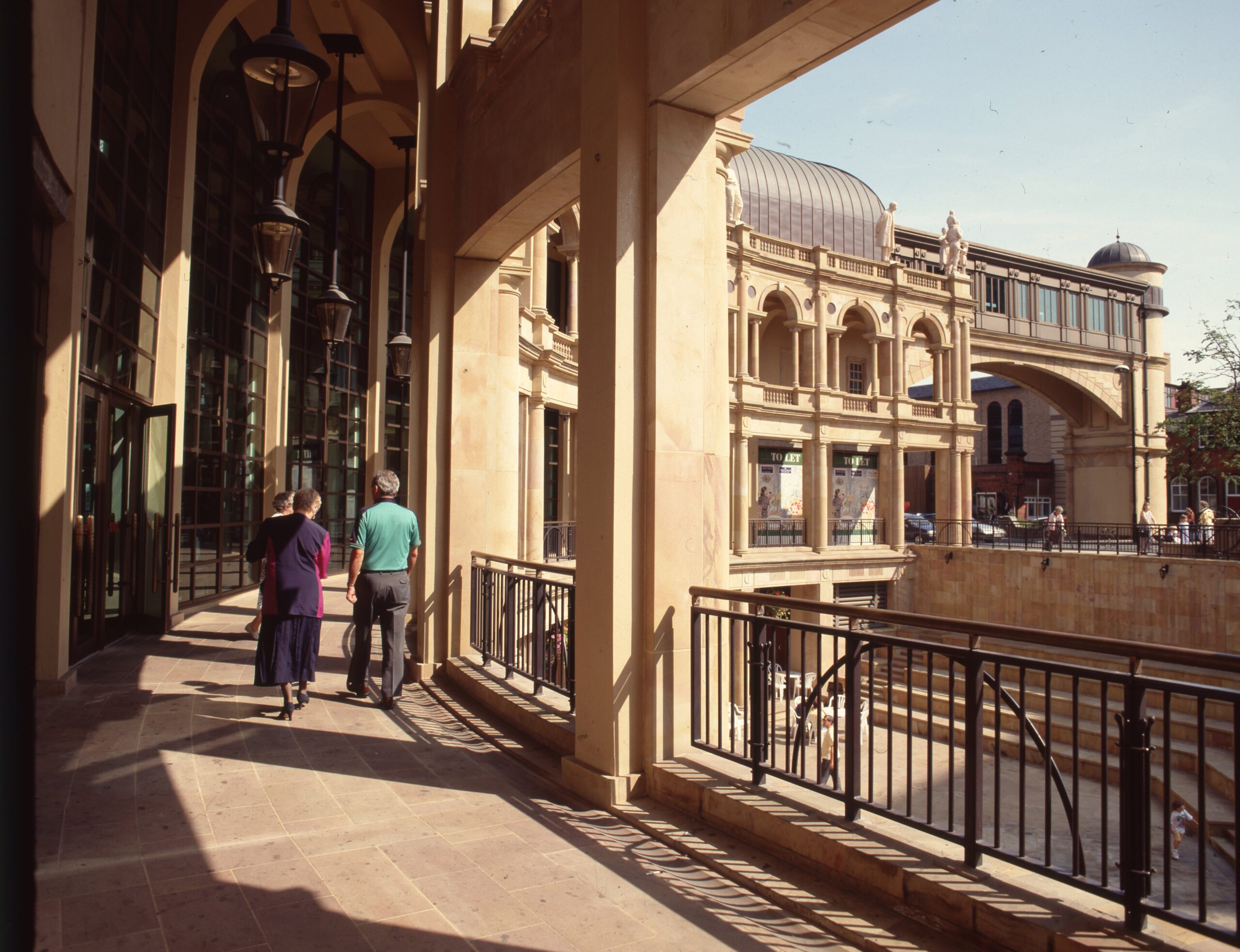 Today, as we see signs that the terrible pandemic is diminishing, Harrogate is crying out for a vision, for a sense that the town’s leadership has a solid and achievable vision for our future, and a vision based on the interest of the whole community, rather than narrow party political lines. Does this vision exist, and if it does, is it being communicated to the entire population?

In my capacity as a historian, I hear from many Harrogate people, and know after long experience that there are many in our town who neither know nor care about the difference between the district and the county council, and are unfamiliar with the work of local government, other perhaps than that they have to support it financially. These – I suggest – are the people the vision needs to reach. And the vision should give inspiration and hope for the future of our much-loved locality.