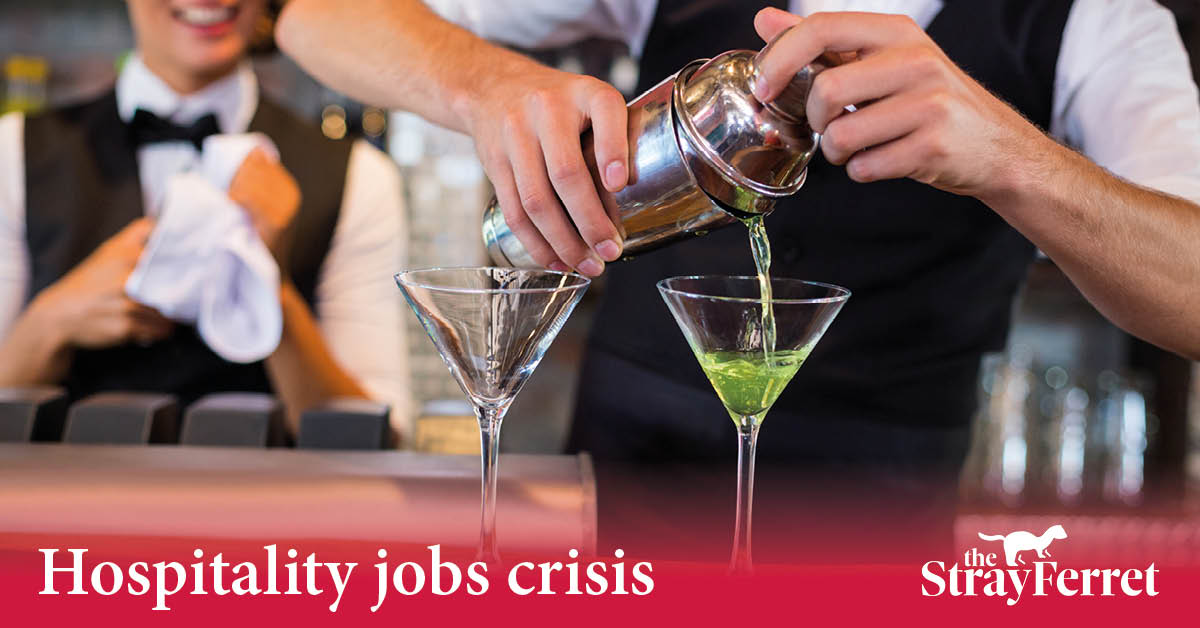 This week we are focusing on a recruitment crisis in the Harrogate hospitality industry as venues across the district report a serious shortage of staff.

17 year old Josh Suddaby is currently with the Stray Ferret on work experience from Harrogate Grammar School.  With friends currently working in bars, restaurants and hotels we asked Josh to report on what they feel about a career in hospitality. This is his report:

Three of my 17 year old friends are working in Harrogate hotels, bars and restaurants to earn some money over the summer holidays.  I have learned that their wages are between £6.00 and £8.20 an hour. All of them are men.

None of my friends wanted to be identified as they felt they could be more open if they stayed anonymous.

I wanted to know if they’d consider making a career out of their current work.

My one friend is working 5-11pm shifts behind the bar in a large hotel.

He told me “the responsibility I’m given makes me feel valuable” and that staff made him feel like he’s worth something in his workplace.

I asked him what he enjoyed about working in a hotel his response was that the flexible hours are good and there was enough variation in tasks to make every shift different.

He liked the social side of the job as he gets to meet a lot of people including colleagues and customers.

So would he consider staying on there? He replied he would not as he felt it was “not something to stay in forever”, as he would rather go on to further education or an apprenticeship.

Working in Housekeeping — £7.50 per hour

Another friend has worked in housekeeping for a large hotel for over a year and a half. He works evening shifts from 5-9pm.

I asked why he chose a hospitality venue he responded saying that they offered the hours of his choice and he can work after school.

He told me he enjoyed it socially, he liked talking to the people who worked around him and getting to know them. But said that it can be stressful in a fast paced environment.

Like my friend behind the bar though he also said that he would not consider the venue a future career, I followed up by asking why to which he replied “don’t think I could do it for life”.

Another one of my friends who works behind the bar and does room service in a large hotel in Harrogate for 20 hours a week.

He told me that’s he has “no ambition” to continue in that area of work as it doesn’t feel right for him.

His reason for getting the job in the hotel bar was to gain money and life skills such as communication and experience in a fast paced workplace.

After talking to my friends in detail,  I feel hospitality venues are not putting enough effort into showing my friends how a career in a hotel or bar could be right for them.

Offering higher pay, showing young people a career path and including good benefits will make more want pursue a career in hotels and restaurants –and not see hospitality as just a summer job.

Tomorrow we’ll be asking whether the high housing costs in Harrogate make it difficult for people to make a living in hospitality.