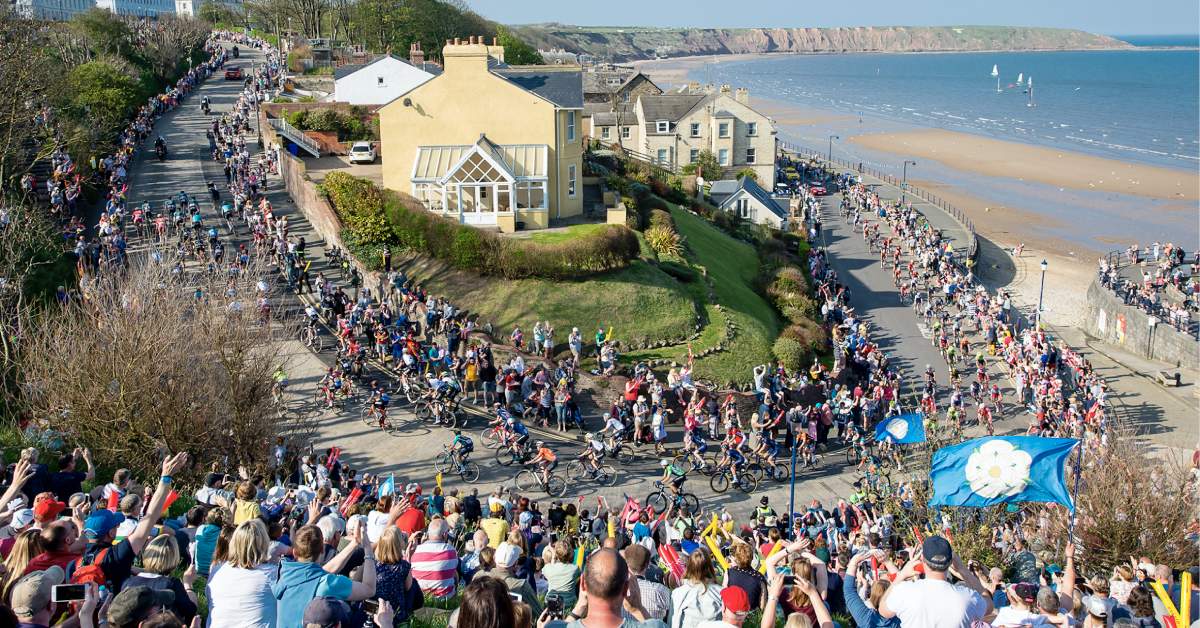 The Tour de Yorkshire passing through Filey in 2018. Picture courtesy of SW Pix

North Yorkshire County Council is in early discussions with Welcome to Yorkshire over funding next year’s Tour de Yorkshire if the body fails to get sponsorship.

The event, which is usually held over the May Day bank holiday weekend, has not taken place for the last two years due to covid.

The request for funding in 2022 is understood to have been made to numerous local authorities, which are host towns for the race.

As Harrogate is not a host town, Harrogate Borough Council is not expected to contribute to the costs. But if North Yorkshire County Council agrees to do so then everyone in the county would pay through their council tax.

The race is being promoted as an opportunity to aid economic recovery across the region, and in particular in host towns and cities of Leyburn, Barnsley, Beverly, Halifax, Huddersfield, Leeds, Redcar and Skipton.

“We are in early discussions about what is needed to enable the Tour de Yorkshire to take place, including whether there needs to be any underwriting of the sponsorship element that Welcome to Yorkshire wants to raise.

“We have not yet taken any decisions about the Tour de Yorkshire.”

According to the Local Democracy Reporting Service, Richmondshire District Council is among the district councils that may be asked to contribute to the event.

An officer’s report to a council meeting next Tuesday said in addition to the usual estimated costs of hosting a stage of the event, “there may be a requirement to underwrite a further amount by the end of June to allow Welcome to Yorkshire to commit to the race”.

The report states there would be a potential extra £100,000 cost to Richmondshire council alone, on top of the £160,000 it has already agreed to pay, if Welcome to Yorkshire is unable to secure sufficient sponsorship.

The report suggests some of the extra funds could be drawn from the council’s dwindling reserves.

Richmondshire council’s corporate board spokesman, Cllr Stuart Parsons, said the authority would debate whether offering extra funds on a weather-dependent event would be value for money.

“Personally speaking, if we are able to raise the money that Welcome to Yorkshire expects we should be investing that money in expanding events that directly function in Richmondshire, like the Swaledale Festival and Richmond Walking and Book Festival as they would bring in a much longer term gain for the local economy.”

However, Cllr Carl Les, Welcome to Yorkshire board member and county council leader, rejected the criticisms, saying it was a duty of councils to promote their areas to a wider audience.

“I am satisfied with the probity and governance arrangements around Welcome to Yorkshire. There’s a new chairman and a new chief executive in place, new board members and audit and other controls in place following reports by Clarion Solicitors and accountants BDO.

“While staycation is going to of benefit this year, in future years we are going to have to be more competitive with other destinations, so we need to set out our stall the best we can, and there isn’t a better way of promoting the geography of an area than following a cycle race as it goes on television for hours. If you had to buy that sort of advertising it would cost millions.”