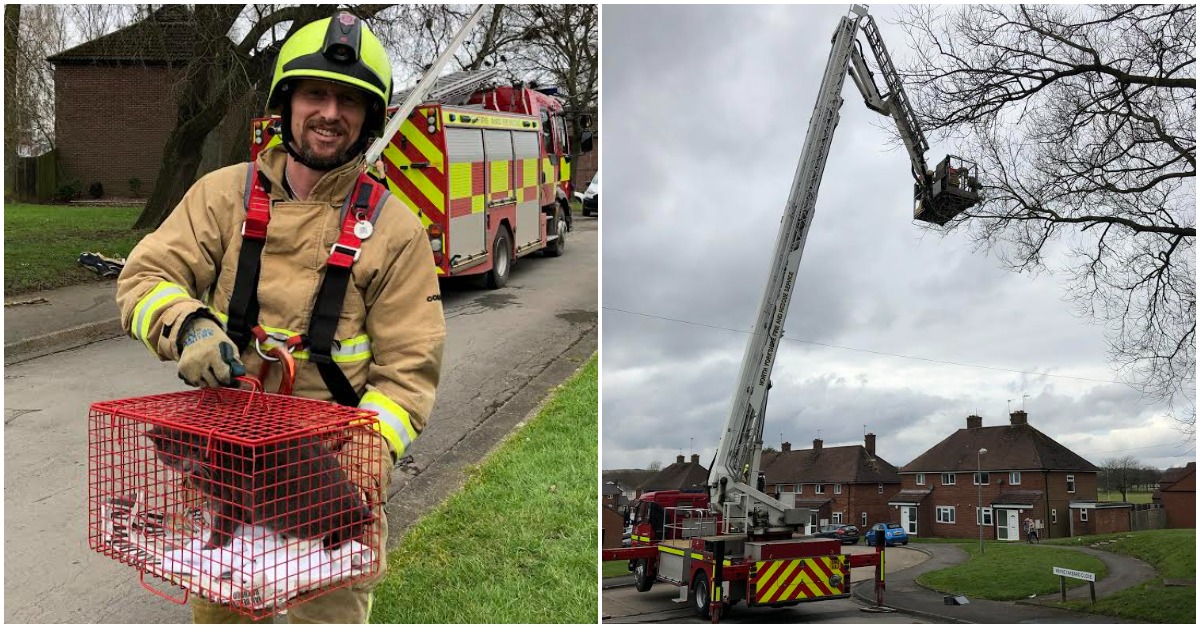 Firefighters from Harrogate rescued a cat called Loki when he got stuck 20 metres up a windy tree in Ripon.

A member of the public alerted the RSPCA on Sunday when they noticed the eight-month-old grey cat struggling to keep his balance on the branches of the tree on Wayne Tarbard Close in Ripon.

Loki’s hind legs kept slipping off branches as they shook in the wind.

When an RSPCA officer was unable to tempt Loki down, extra help was required.

A fire crew from Harrogate rushed to the scene and used a 10.5 metre ladder to attempt the rescue.

But Loki kept climbing higher, and was soon out of reach from even the ladder.

Another crew from Harrogate was summoned, and with the help of an aerial ladder platform was able to bring the furry animal safely back to ground.

@NorthYorksFire attended a cat stuck up in a tree with Insp Little in Ripon. Unfortunately after multiple attempts using every trick in the book they had to call upon the Ariel ladder. Working together they managed to reach Loki and bring him down to safety. @RSPCA_official (64) pic.twitter.com/HvVyKvhUKJ

After being checked by the RSPCA officer, Loki was reunited with his worried owners.

RSPCA inspector Claire Little said cats were usually adept at finding their way down trees and could be coaxed with strong smelling food like fish. But Loki’s circumstances were different. Ms Little added:

“This poor cat had become well and truly stuck in the tree during quite windy weather.

“RSPCA officers are trained to use ladders, which they carry for rescues like this, however, in situations where we are still unable to reach the animals, we may ask the fire service to help and they often use animal rescues as a vital training aid.

“The fire service tried everything from ladders, reach and rescue poles and eventually they used the aerial platform to bring little Loki down to safety.”