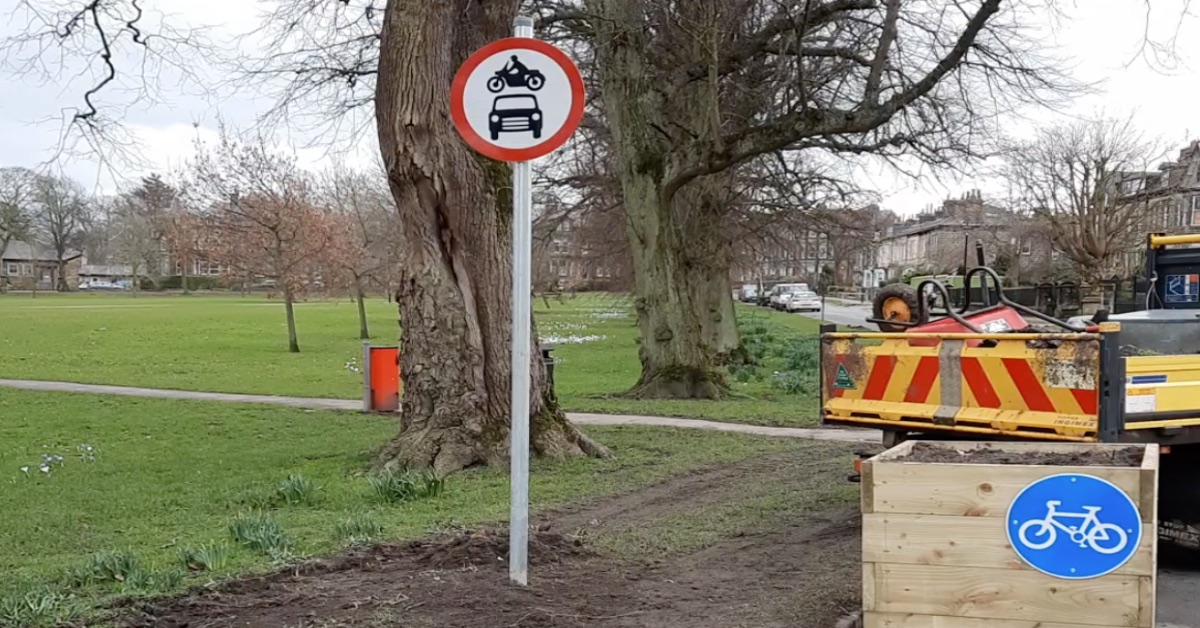 A ‘no motor vehicles’ sign has gone up on the Stray to stop drivers using the land to avoid the new road closure on Beech Grove in Harrogate.

Harrogate Borough Council granted a request by North Yorkshire County Council, the highways authority, to put up the sign even though it is on Stray land.

Beech Grove closed to through traffic last week but some motorists have been mounting the kerb to avoid the newly-installed planters.

The decision to allow the sign has angered the Stray Defence Association, which was set up in 1933 to prevent building and encroachment on the Stray,

The Harrogate Stray Act 1985 says it is unlawful to erect items on the Stray without the permission of Harrogate Borough Council, which is the protector of the 200 acres of land.

Judy D’Arcy Thompson, chair of the association, said it could pave the way for more signs, which would harm the Stray’s appearance. She said:

“In any case, people could still drive round it.”

Ms D’Arcy Thompson said North Yorkshire County Council, which has closed Beech Grove to through traffic for six months on an experimental order, had made a mistake by not consulting adequately on the proposal. She said:

“They rushed into this without consulting local people and are now adding to the problem by including Stray land.”

“We consulted on these measures in line with statutory legislation and guidelines.

“Consultation was initially undertaken with emergency services representatives, local members and other statutory bodies in December with no concerns raised.

“During engagement with the Yorkshire Ambulance Service, the need for designated emergency standby parking to aid ambulance responses in the town was identified and provided as part of the scheme on the nearby Trinity Road.”

Ms Burnham added the six-month experimental order allowed residents and road users to take part in the ongoing live consultation that is being held in conjunction with the road closure measures. She said:

“We will consider all feedback received during the consultation period.”

A Harrogate Borough Council report that recommended approving the sign on the Stray, which was approved on Friday, said:

“The proposal seeks to enhance the experience of people using the Stray for public access and recreation therefore the officer recommendation is that under the Harrogate Stray Act 1985 the proposed schemes for the road safety signs be approved.”