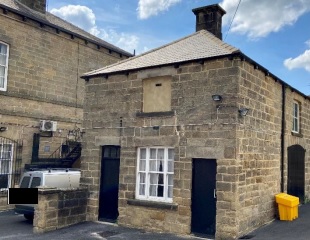 The Coach House at the back of Claro Chambers

Plans have been submitted to convert the Coach House at the back of the former Natwest Bank on Knaresborough high street into a two-bedroom home with two car parking spaces.

Knaresborough-based CFK developments is behind the proposal which will see the building put back into full-time use after almost a hundred years.

The main building is called Claro Chambers and has been vacant since the bank moved out in October 2017.

The Coach House is part of CFK Developments’ wider plans for the site. In 2019, Harrogate Borough Council granted the company planning permission to build three 3-bedroom terraced homes in the car park of the former bank.

Earlier this year, CFK also submitted plans to change the bottom floor of the bank to a cafe, restaurant or office. The plans are yet to be decided.