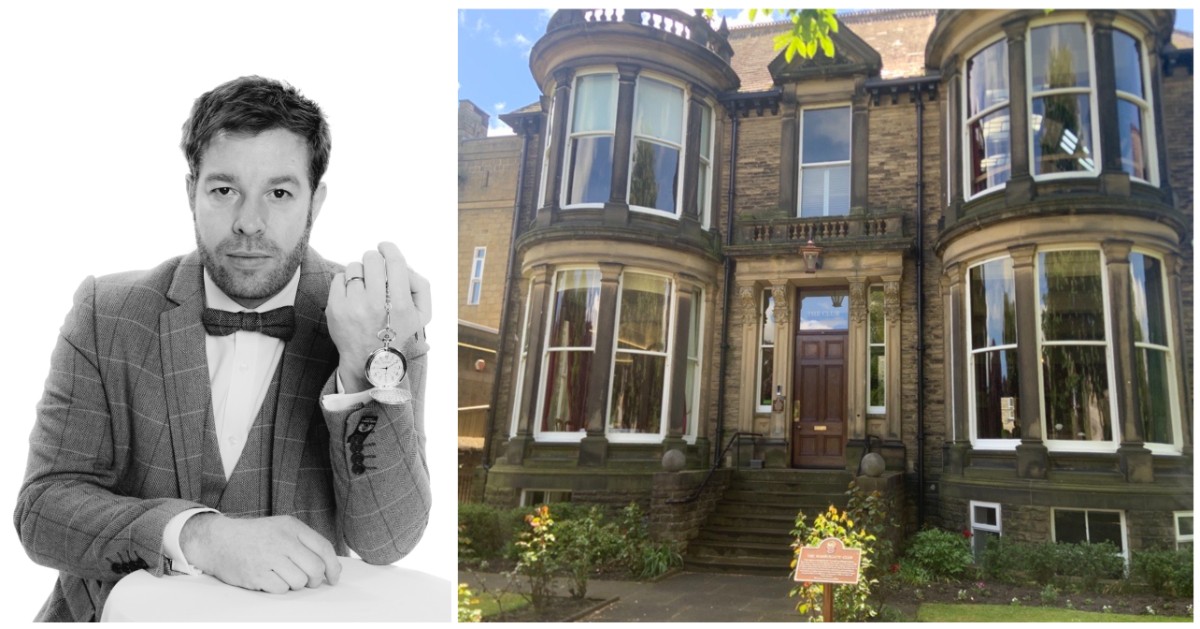 A seance held in Harrogate by Sir Arthur Conan Doyle and Houdini forms the inspiration for a new play by a local writer.

Paul Forster started looking into the 1921 event at the Harrogate Club when he was researching a new book about the town’s ghostly connections.

“I love history and things that are a bit spooky. When I found out the story about the Harrogate Club where Arthur Conan Doyle had gone, that really intrigued me.

“To then find out that Houdini – someone I really admire – was there, it was too good to be true, really.”

Paul then did more research into the pair’s relationship, which he discovered was fractious.

Houdini, still in the early stages of his career, was keen to make a name for himself and contacted the Sherlock Holmes author. Paul said:

“They enjoyed a good friendship together and came to Harrogate and visited the spa and went to the club, where they held a seance.

“Doyle was a strong believer in clairvoyance. Houdini was open-minded, but being a magician he could see a trick a mile off. He thought they were all fakes.”

The friendship between the famous pair was short and their contrasting views increasingly came between them.

However, inspired by the unlikely pairing and unusual event, Paul – a trained actor who has worked in the arts most of his life – wrote a play, Conjuring the Dead.

A combination of lecture and performance, it sees him share his research into what took place, before reading some letters he has written based on imagined correspondence between the two.

After that, Paul transports the audience to the Harrogate Club, where he recreates the seance, bringing the story to life.

He has been performing it at Durham Town Hall as part of the city’s fringe festival this week, with the last show due to take place this evening.

Later in the year, Paul hopes to bring the show to Harrogate in combination with the ghost walks he already runs in the town. They take place on the first and last Friday of each month, setting off from the Royal Pump Room Museum.

“They’ve been incredibly popular – about 900 people have been on the walk.

“I’ve been rwriting a book about Harrogate ghost stories and I’ve found some new material to use.

“My plan is to do a new half-hour ghost walk just to a few locations from my book, then afterwards we go to the Crown Hotel and I’ll perform the show.”

Although describing himself as a paranormalist, Paul said he only saw his first ghost while researching the new book, when he was speaking to staff in the Turkish Baths on Parliament Street.

He said he saw a woman look out of a cubicle which staff later told him, without prompting, was haunted. They said the ghost often shut the cubicle door so Paul challenged the ghost to do so – and the door closed just as the interviews finished.

He then heard a woman’s voice saying “ha ha!” which a customer told him she had also heard on a previous occasion.

He has had a number of other spooky experiences – including at this week’s performances, where he made changes to the play after an incident on the first night left him and producer Neil Bradley-Smith perplexed.

“Something went wrong in the routine that shouldn’t and couldn’t go wrong. There was a bit with a fake key that I gave to an audience member and asked her to unlock a box.

“The key worked. I shot a look to my producer – neither of us could understand it. Then the lady tried it again and it didn’t work. How can a key work and then not work, when it shouldn’t work in the first place?

“I took that bit out of the play the next night!”