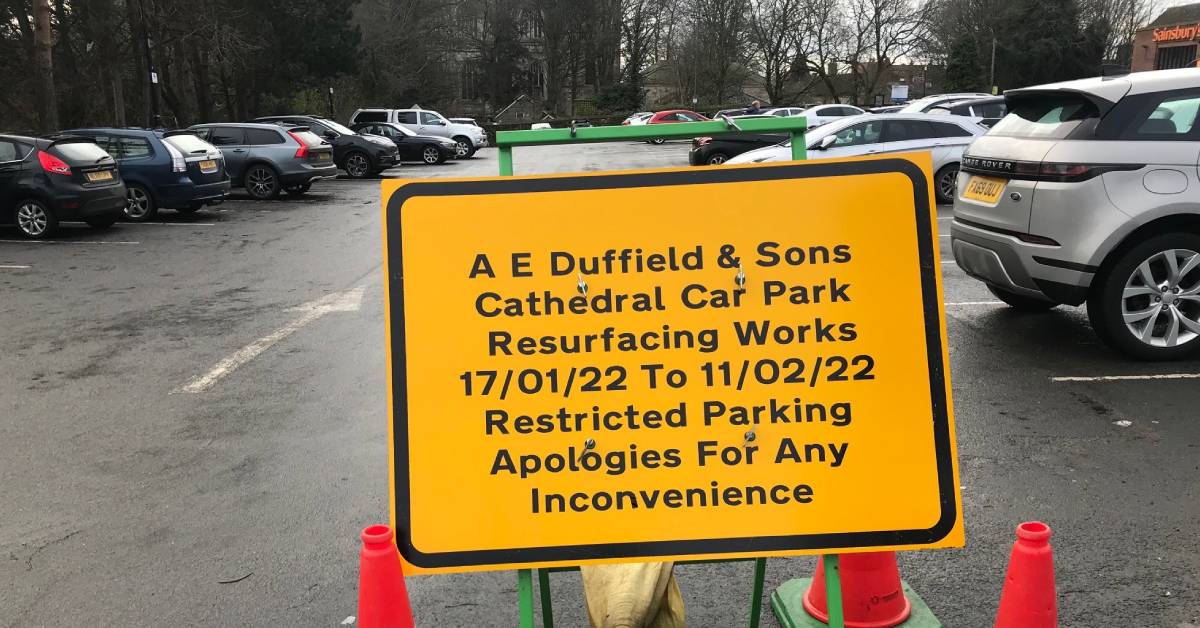 One of the signs at the Cathedral Car Park.

Parking spaces will be temporarily reduced in Ripon from next week while resurfacing work is carried out at the city’s biggest car park.

Work on the 193-bay Cathedral Car Park starts on Monday and is scheduled to be completed by February 11.

Signs say that over the three weeks, there will be ‘restricted parking’ available.

Before local company A. E. Duffield begins the £85,000 contract, Ripon City Council has reiterated its call for spaces on the car park to be widened to accommodate the larger vehicles that many people now drive.

At Monday evening’s city council meeting, members were told by town clerk Paula Benson that Harrogate Borough Council had not as yet responded to correspondence about the request for enlarged spaces.

“With the work due to start next week, we need an answer from them.”

The call for spaces to be increased in size came at the city council’s December meeting, when Councillor Pauline McHardy said:

“Modern vehicles are wider and with the current size of the spaces, people find it difficult to get in and out of their cars.”

Cllr McHardy’s call for enlargement was seconded by Councillor Chris Davis, who told the meeting:

“The bays are narrow and I’ve often found it difficulty to find a parking space that my car will fit in.”

The Cathedral Car Park is used by drivers for long and short stays and in the contract notice for the work, Harrogate Borough Council said the site had become worn and hazardous to members of the public.

“Over the years the current surface of the car park has become pot-holed, with large areas of loose tarmac resulting in trip hazards to members of the public, and claims for vehicle damage.”

The contract is for a complete resurfacing of the car park, and to increase the number of parking spaces to 206, along with 10 disabled bays.

The council will also require the contractors to undertake trunking and ductwork in preparation for the installation of electric vehicle charging points.

Katherine Jenkins was spotted in #Knaresborough yesterday filming for Songs of Praise on BBC One.
Photograph: Sharon Cullen