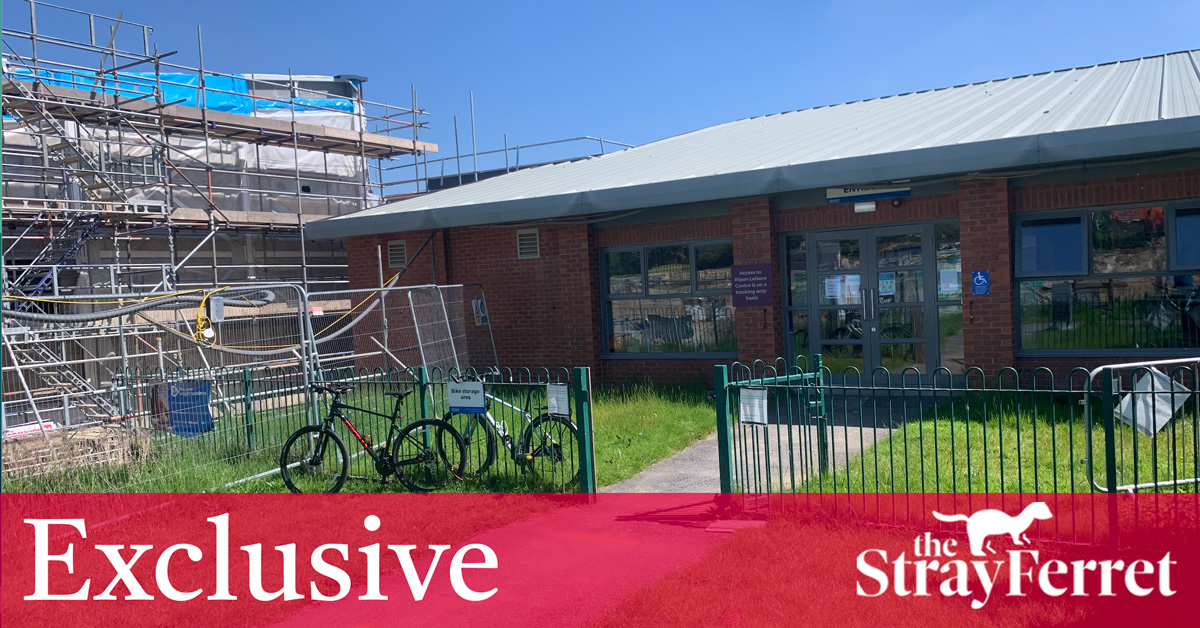 The Stray Ferret has obtained a copy of a letter sent by geologist Dr Alan Thompson to Harrogate borough councillors in which he states issues around the stability of the ground of the existing leisure centre haven’t been taken seriously enough.

Dr Thompson, a director of Cuesta Consulting in Somerset, was the principal author of a definitive document in 1996 on land in Ripon where there is a risk of ground instability, which subsequently provided the basis for Harrogate Borough Council’s planning policy.

His intervention follows an inspection carried out by global consultancy firm Stantec into a “cavity” that appeared near the entrance to the existing leisure centre building in September 2020.

In a strongly-worded letter he claims that the council has not followed its own protocols.

“My stark conclusion is that, if the lessons to be learned from the Stantec report are not heeded, the council could be walking blindly into a major problem – not least in terms of public finances and political consequences but also, potentially, in terms of future public safety.”

In May, Michael Constantine, head of culture and sport and interim head of operations, answered questions on the safety of the development at the leisure centre site.

Dr Thompson claims cabinet members  were not made aware of the wider concerns about the site contained in the Stantec report:

“The purpose of this letter is to draw the Councillors’ attention to a number of key findings identified in that report, (that) clearly demonstrate the cavity in question is associated with ongoing subsidence activity relating to gypsum dissolution.

“The findings also reveal serious concerns about the extent of instability beneath other parts of the existing building and the inadequacy of the foundations that were used.

“Those concerns have clear implications for the new swimming pool development.”

What was said to cabinet members in May?

At the cabinet meeting on May 26, Mr Constantine was asked by councillor and deputy leader Graham Swift if the project had followed protocols. Cllr Swift said:

“I think you are aware that there are residents out there who have written to members either under their amateur-guise of geology or potentially historic professional credentials for geology and have expressed some concerns about the work that is carrying out there.

“I just really wanted to take this opportunity to receive your assurances that although we are not necessarily in negotiations with the amateurs or the residents that are making the claims, just make sure we are undertaking professional surveys throughout this work, we have got the right technical geologists on all the work and that all the right protocols are taking place for the progress of this project.”

“I am very content to be able to give cabinet, council and any interested residents my assurance that as a project team we are employing sufficiently qualified and experienced geologists and geo-technical engineers.

“The ground investigations works is proposed to take place and be delivered by the company who have undertaken the main series of investigations and re-enforcement works for the main new pool facility. They have a very detailed knowledge of the site and they are pretty much the UK industry experts in stabilisation.”

Mr Constantine also said that the cavity discovered in September 2020:

“Is a shallow void which goes underneath the building and is not thought to be a related dissolution feature.”

What does the Stantec report say?

The ‘void’ was discovered on 14 September 2020, when principal contractor Willmott Dixon (WD) was excavating foundations for the new swimming pool extension to the leisure centre.

Stantec’s report, which has been seen by the Stray Ferret, raised concerns about the load-bearing capacity of existing piles under the existing leisure centre, which would have been used to support the connection between the new pool and the leisure centre.

Discussions where held with Willmott Dixon and construction and property consultants Pick Everard  (PE) and a new design solution was put forward.

The report states that this approach is:

“Expected to provide sufficient mitigation of the risk of future ground collapse to the new extension.

“The risk of the ground collapse further impacting on the existing building can’t be overlooked, in the short term the void should be backfilled with inert crushed gravel and should be monitored and regularly topped up to maintain sidewall support to allow works on the extension and the raft foundation to be undertaken.

“Further detailed investigations are required to evaluate the stability of the existing building given the concerns raised.”

Dr Thompson’s letter to councillors makes it clear that he thinks more needs to be done following the report:

“Any further development in the same area (such as the new swimming pool) would clearly require very extensive ground investigations and very careful foundation design, in line with the protocols set out in Policy NE9.

“Even then, it would not be surprising to conclude that, on this particular site, an adequate engineering solution for a public building might not be financially feasible.

“Inadequate ground investigations may have been carried out, leading to reliance being placed on inappropriate engineering solutions.

What is the council’s response to Dr Thompson’s concerns?

In a statement to the Stray Ferret a council spokesman said:

“The multi-million pound investment project at Ripon Leisure Centre shows our commitment to providing modern, fit-for-purpose leisure facilities for the people of Ripon.

“Given the well-known ground conditions in Ripon, we employed qualified and experienced geologists and geo-technic engineers to carry out necessary investigation works and advice on what would be required to provide this much need facility.

“We are committed to providing this much needed facility that will encourage a healthier and more active lifestyle for our residents and something they can be proud of.”