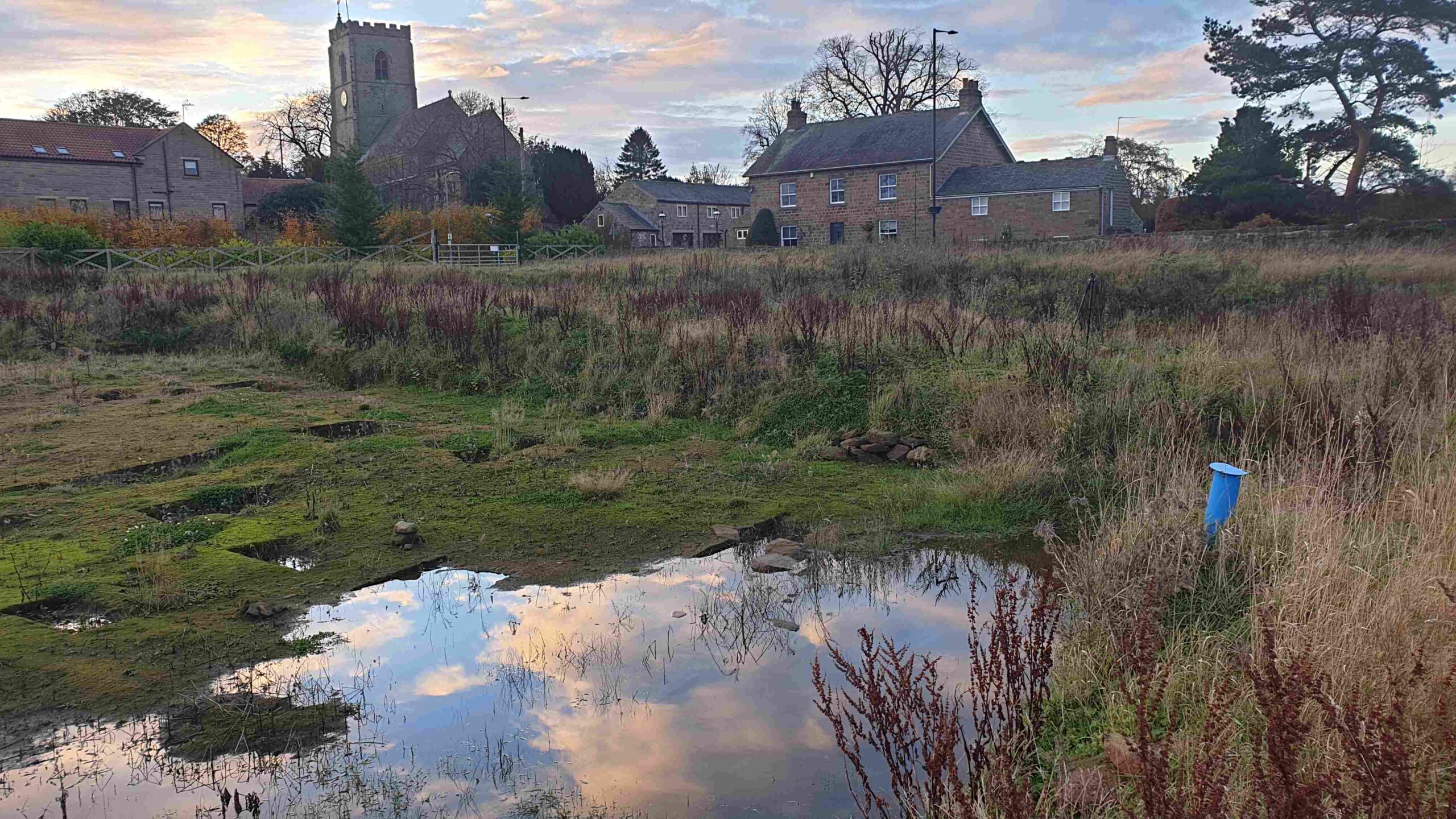 The Vistry Partnership and Yorkshire Housing Ltd want to build 72 houses on a 2.8-hectare site on the edge of Spofforth, a conservation village, south of Harrogate.

A village at risk

Spofforth is built on a ridge overlooking fields that have been farmed since the 8th century.

The village is listed in the Doomsday Book with a long and chequered past.

Locals are protective of over 30 Grade II listed heritage assets that are to be found in this beautiful village.

In 1978, this legacy was awarded conservation status in recognition of the village’s special character and distinctiveness of its setting, buildings and open spaces.

But Spofforth, like so many other rural settlements in the borough is facing rapid expansion under Harrogate Borough Council’s drive to meet housing targets. 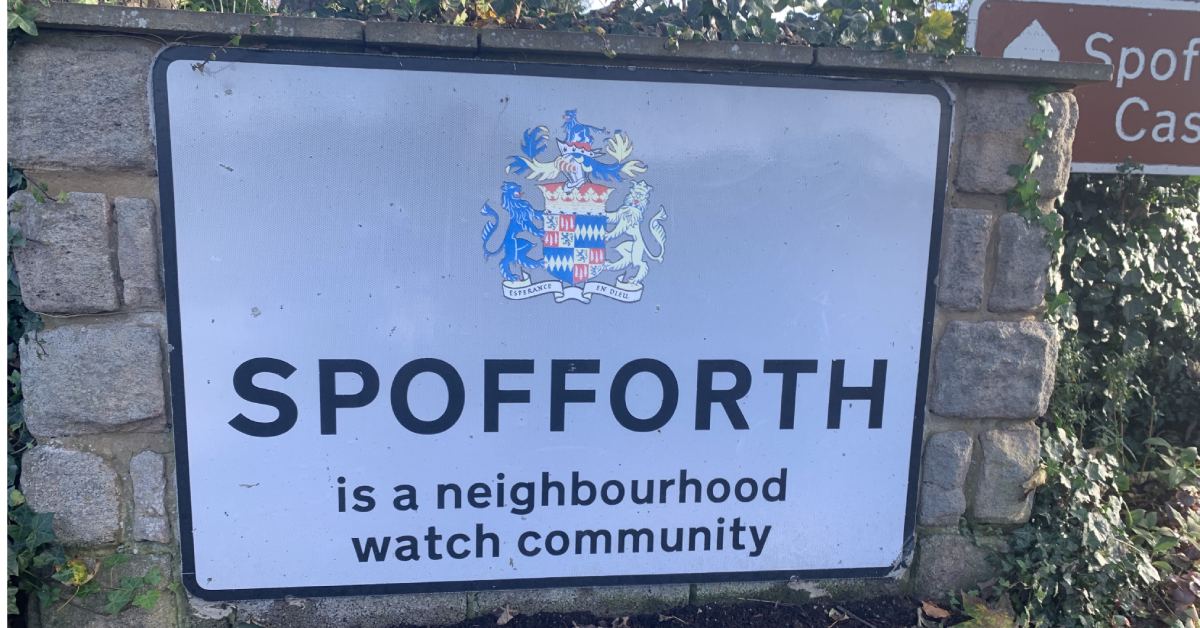 The ‘indicative’  plans showed a luxury development with a series of ponds, substantial landscaping and trees.

Historic England, the council’s conservation officer, and the borough council’s Local Plan raised concerns that any development on the site would cause “significant harm” to the village’s unique character.

A previous application on the same site had been refused for that reason.

Historic England warned planners that that there must be ‘clear and convincing justification and that the public benefits of the proposal outweigh the harm’.

Planners claimed that ‘the benefit would come from the delivery of new homes’.

Later that year Opus North put the site up for sale. The Vistry Partnership (formerly Bovis) and Yorkshire Housing Association reached agreement to take the site forward to completion.

To overcome the various challenges the site presented, a new plan was drafted by the developers.

Natural England, the borough council’s principal ecologist, and Yorkshire Wildlife Trust had all originally advised planners that the development will have a long-term impact on the ecological functioning of the River Crimple Corridor.

The principal ecology officer reminded planners that the National Planning Policy Framework protected against a net loss of biodiversity and advised that the original plan should not be accepted by the local authority.

The plan was then adjusted to take in concerns but neither the principal ecologist nor Historic England have subsequently been consulted about the latest lay-out design, access and landscaping proposals going to committee today.

Harrogate Borough Council argues there is no requirement to re-consult as “the principle of development has been established”.

The parish council says that the most recent plans are so far removed from the original proposal a new, full application should be made.

Harrogate Borough Council is responsible for ensuring that the drainage on the site meets a myriad of conditions to protect the new homes and surrounding properties from flooding.

The fields are known to have flooded since medieval times.

Locals sent photographs to planners showing the river inches away from breaching Spofforth’s flood defences during Boxing Day floods in 2015. 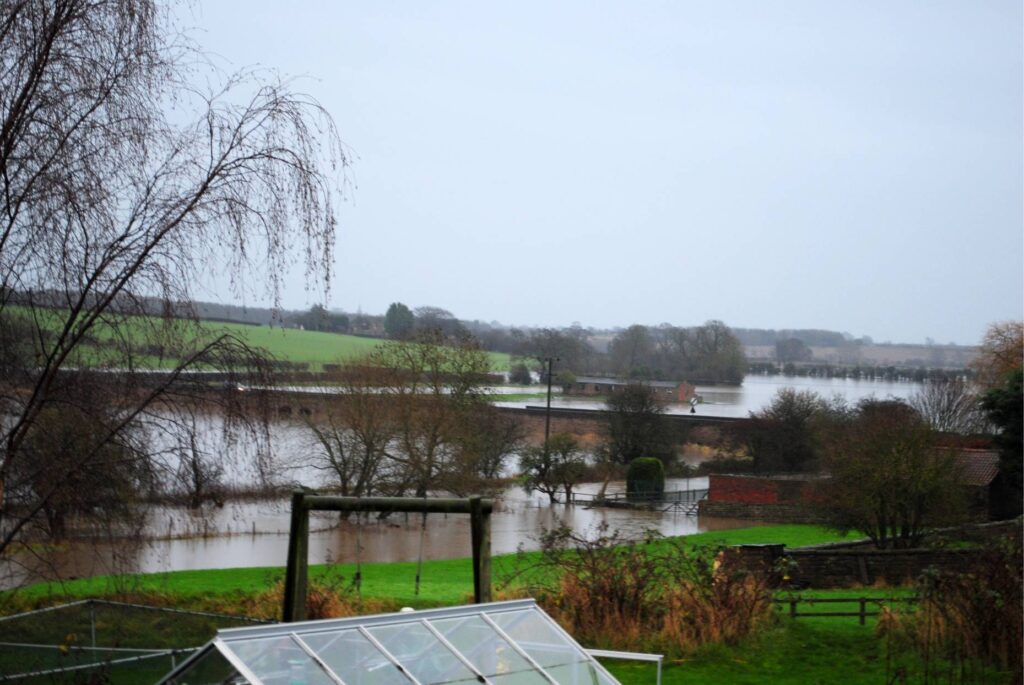 In a public consultation in August 2017, residents expressed the concerns:

‘I have lived at Crosper Farm all my life (63 years) and have been involved with farming the field in question for many years. It has always been subject to flooding to the top of the hedge at the far end of the field. The amount of hard landscaping involved in this development would cause more rainwater run-off into the Crimple which is already running at more than capacity. The river has flooded over the banks for 3 consecutive weekends in February this year (2020) ‘

Over the past three years, various versions of a drainage system for the development have been put forward to protect the site and surrounding properties from surface water and flooding.

The parish council says these are ‘ill-considered’.  The Lead Localised Flooding Authority(LFFA) consults and advises the council on surface water drainage. In a letter dated 16th October this year, they emphasised early advise and told  planners:

‘The submitted documents are limited and the Lead Localised Flood Authority recommends that the applicant provides further information before ANY planning permission is granted.’

The latest proposal involves raising the site level by 1.5 metres sloping towards the existing level at the foot of the flood defences and surrounding properties.

‘Not only will this make the new development even more prominent which will impact on the views from surrounding properties, but it will have a significant effect on adjacent land with regards to flooding.’

But last month, the council received a letter from the parish council. It listed 18 policies contained within the Local Development Plan, the National Planning Policy Framework, and the Town and Country Planning Act, which the parish council considered were not well met by the scheme.

The council has acknowledged the concerns and attached an elaborate list of ‘conditions’  to any approval to mitigate the issues.

But it’s not enough for the parish council, which said:

“Although the applicants have prepared revised proposals, they have failed to address our basic concerns about density, numbers, levels, flooding, parking and sustainability. They claim to have achieved ‘a closer-knit urban grain’, which is what most parishioners are hoping to avoid, in our historic rural village.”

Today the planning department is recommending to the planning committee that the decision should be deferred to the chief planner, John Worthington to approve when all conditions are satisfied.

“It is considered that the scheme is in accordance with the provisions of the development. The details of the reserved matters, appearance, scale, layout and landscaping are acceptable, and approval can be supported.”

As a resident of Spofforth I contacted my local conservative MP, Nigel Adams, and outlined all the concerns raised in this report. His office has contacted me making it clear he is well aware of the issues:

Nigel Adams MP has taken note of the salient points which have been raised and has asked the decision makers to take them into consideration when the application is decided.

An appropriate representation has been made to the Planning committee.

However it is important to understand that an MP has no formal part to play in deciding planning applications. However an MP can make representations in the same way as members of the public and this has been done in this case.

Nothing so far has allayed fears of flooding or convinced the locals that the proposed development offers the benefits the council claims it will have.

The Stray Ferret has been investigating the unprecedented amount of housing development in the district and examining the impact of Harrogate Borough Council’s failure to have a Local Development Plan up to March 2020.

In a series of special reports each morning next week we will be asking:

Building Boom or Housing Crisis– have the wrong homes been built in the wrong places at the wrong price?