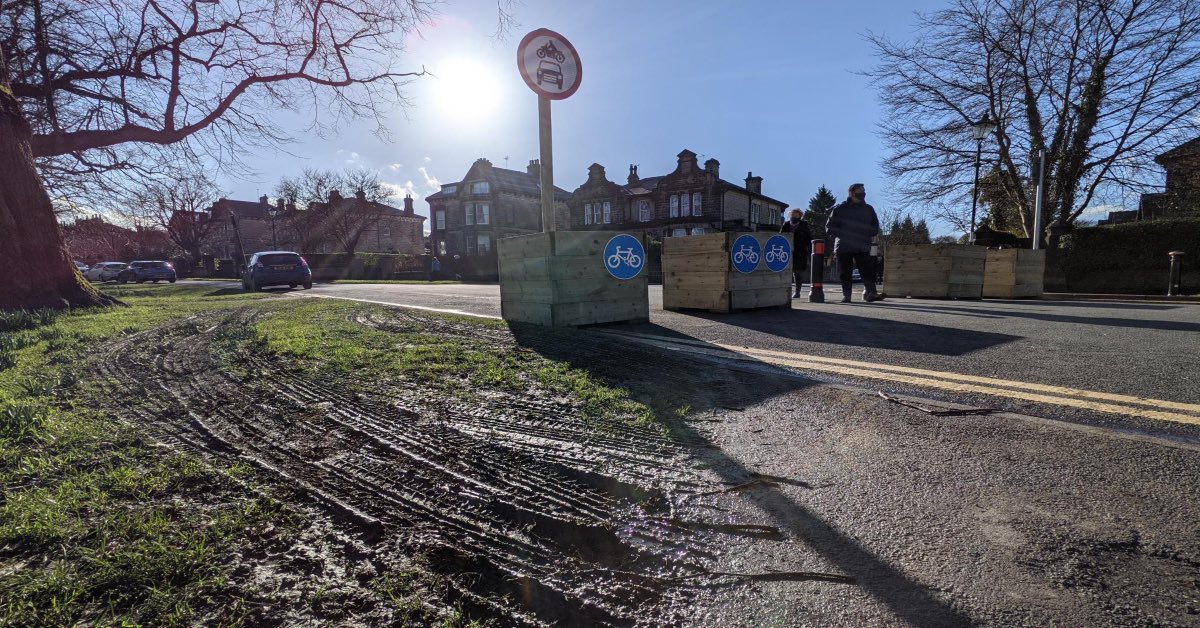 Fresh tyre marks on the Stray today from vehicles going round the road block.

Highways bosses are to apply to erect a bollard on the Stray to stop cars driving over it to avoid the Beech Grove road closure in Harrogate.

Last week, the Stray Ferret reported cars were driving over the Stray to get around the new closure, which was put in place to block through traffic and create a Low Traffic Neighbourhood.

Cllr Don Mackenzie, executive member for access at North Yorkshire County Council, described it as “extremely poor behaviour” and added that drivers were committing an offence.

Some people have taken to social media to report alleged incidents of drivers going over the Stray to get around the planters.

Andy, I have clear pics, including reg, of a Range Rover that's driven on the Stray to go round the Beech Grove planters. Who can I send them to for follow-up? pic.twitter.com/demf0Iwa8O

In a tweet, Cllr Mackenzie said the county council, which is the highways authority, would apply to Harrogate Borough Council to place a bollard on the Stray to block such manoeuvres.

He added the authority had already erected a bollard on the footpath side to prevent cars from mounting the pavement.

The borough council said it had yet to receive a request for the bollard, but confirmed that such a plan would require approval under the Stray Act.

Beech Grove is closed to through traffic for six months before the county council, which is consulting on the scheme, decides whether to make it permanent.

In a letter to the Stray Ferret, Chris Granville, a resident on Beech Grove, said it had been “the most thoughtless implementation imaginable”.

“The signs are completely inadequate to inform the motorists of the change so it is almost inevitable that drivers will come up against the barriers.

“It would have been so easy to display reasonable size signs in good time, but no, it has been implemented as a motorist trap. It would also have helped if there was a partial barrier at the town end of Beech Grove, outside Wentworth Court, being a clear indicator that entry was for residents and parking only.

“Whoever has done this should show a little respect for road users.”