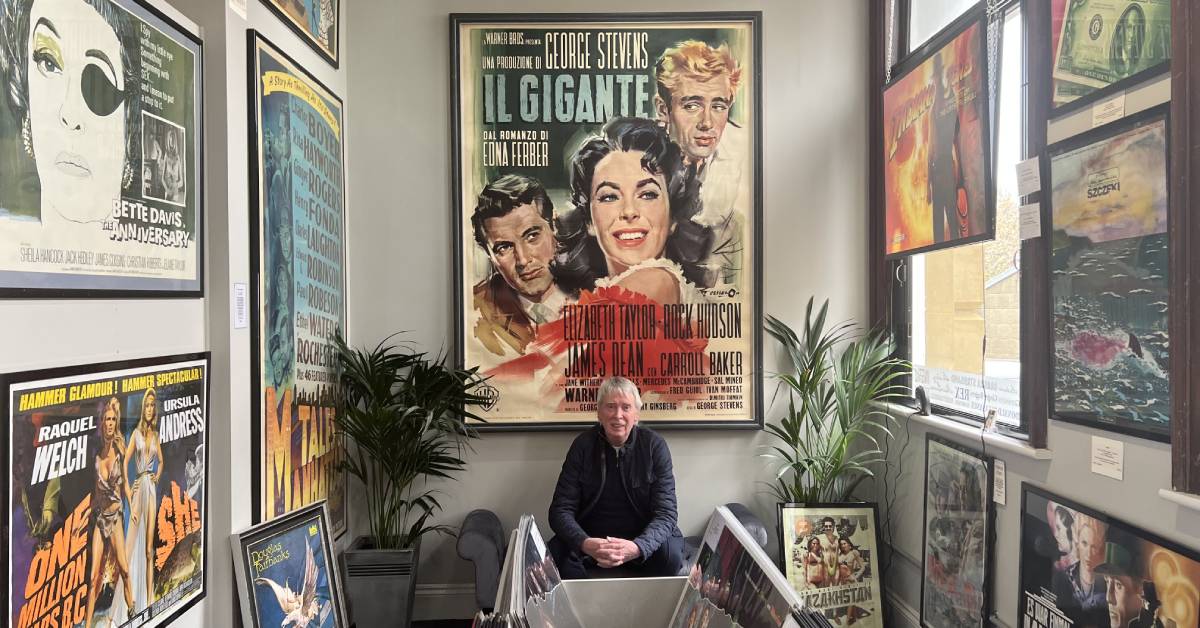 He has hung out with Hockney, was behind Mia Farrow’s famous pixie haircut and organised the first gigs for the Sex Pistols and The Jam.

But it is a lifelong obsession with collecting film posters that has led to a conversation with me on a cloudy April day in Pateley Bridge.

Eric, who is also known as Owen, is one of those people who just gives you joy. Within minutes of meeting him, he had me in stitches and I wanted to be his bestie.

It comes as no surprise that he has rubbed shoulders with some of the world’s biggest stars, working as a celebrity hairdresser, photographer and gig promoter in London.

Being so well-connected has helped him build up one of the country’s biggest private collections of film posters, which is believed to add up to around 7,000.

He is now displaying and selling his prized posters, which span a century of film, at The Tordoff Gallery, on Pateley Bridge High Street. He runs the impressive venue, which is somewhat of a hidden gem, with his business partner and fellow film enthusiast, Gloria Tordoff.

“I started collecting about 50 years ago. I’ve loved film posters since I was a child. I just love the artwork.

“When I was a paper boy in Harrogate and I used to go around on my bike, I used to see the posters, especially the Hammers, and they were in these little boxes, just pasted over. I used to think what a waste. I appreciated even at that age that it was art.

“And it is art. Some of those Hammer posters were done by the top poster artists of the day. But they weren’t available to buy.

“Film posters have always been big in America, never really here up until recently.

“So then I started going to auctions and buying posters just to put on my walls because I loved them. I never thought of them as an investment and I wanted to get my hands on as many as I could get.” 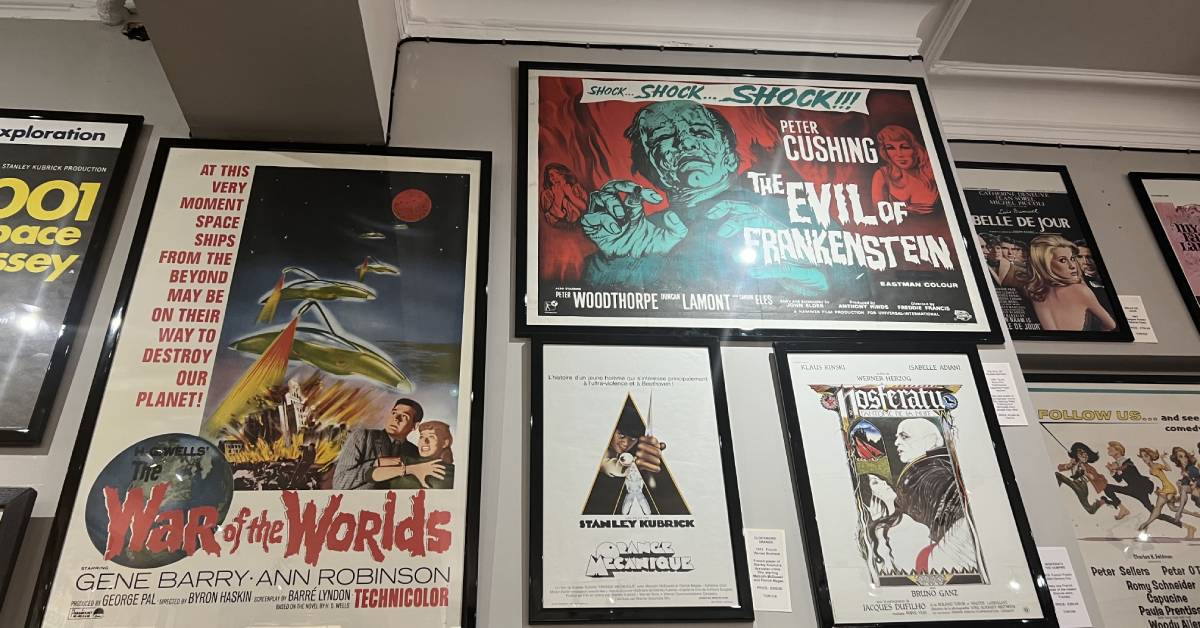 Some of Eric’s film posters, including War of the Worlds and Nosferatu.

Eric slowly started building up his collection and every time he bought one it would become his favourite.

“I would sit and look at it all day and study it and then do the research, which was difficult to do as it was pre-internet. But it was so interesting.

“I’d find out how many were printed, who the artist was, about the movie and slowly the collection got bigger and bigger.

“A poster would just be laid down flat with tissue paper on it and then another one would go on top of it. Then I couldn’t even look at them, as every time I tried to take one out it would tear.

“So this is fabulous for me. Every day we get stuff out that I can’t even remember buying or ever seeing before!”

The posters, which are in immaculate condition, have been displayed or stored away at Eric’s London home for decades.

So when Keith and Gloria Tordoff, former owners of The Oldest Sweetshop in Pateley Bridge, offered him the opportunity to display his collection in an old bank, he jumped at the chance.

“There is a giant poster of Il Gigante on display here from Sotheby’s that has been rolled up for 30 years. It literally is the only one available in the world. There are probably other ones smaller, but that is in six pieces and is backed on to linen.

“It is the best depiction of James Dean’s face ever. It hasn’t even got a price yet. At the time when I bought it everybody in the room wanted it. But I got it.”

Talking to Eric, you can see how much he adores his collection. His eyes light up and he becomes increasingly animated when he talks about each poster.

He stressed it wasn’t about the money, but rather them going to a good home. Buyers have to be vetted before the posters go. 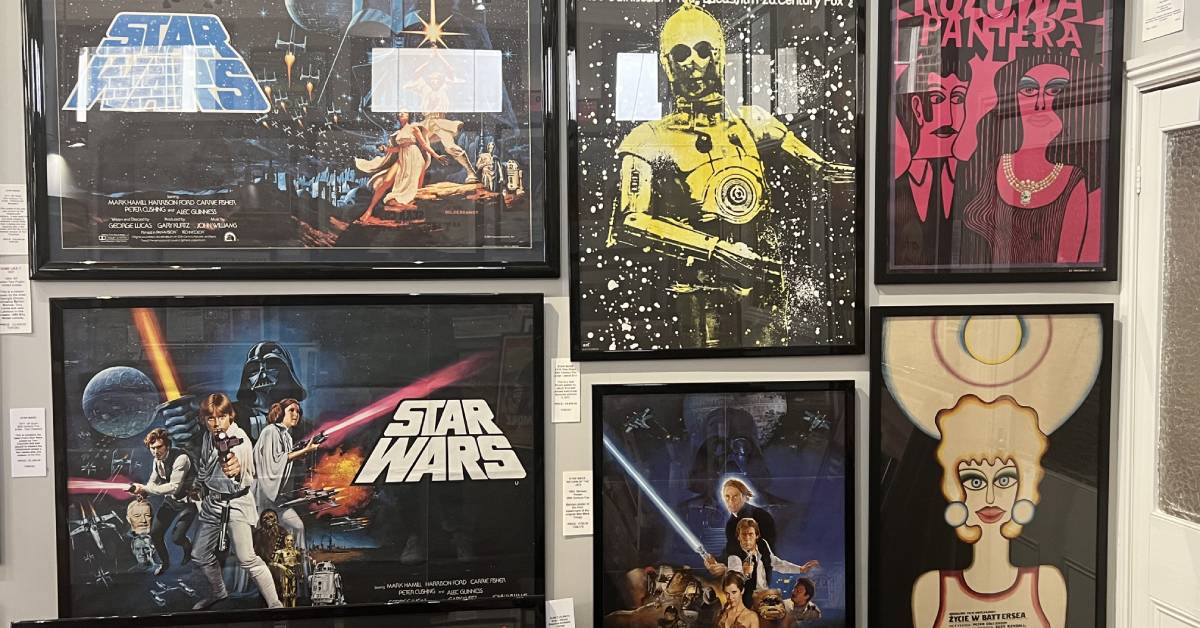 ‘I just love looking at them’

“Parting with them is just so hard. I have to go and sit in the car.

“It’s about them going to good homes and I just love looking at them. It’s nice to see people enjoying them. We had a media studies teacher who came in and started crying. He said he had never seen any of these, apart from in books.”

Everywhere you turn in the gallery, it is pure nostalgia. It is a movie treasure trove and there is something from every era, including the modern day.

Eric, who said he would sometimes buy up to 200 posters a day, said:

“I’m getting into the modern stuff as you can put them in the light boxes. The posters are double-sided. They just look fabulous.

“We are waiting for a poster that I’m very excited about. Deadpool. It’s him doing the Flashdance water scene.

“I am still collecting and I get so excited when I know one is coming. I don’t sleep and I can’t get in here early enough.” 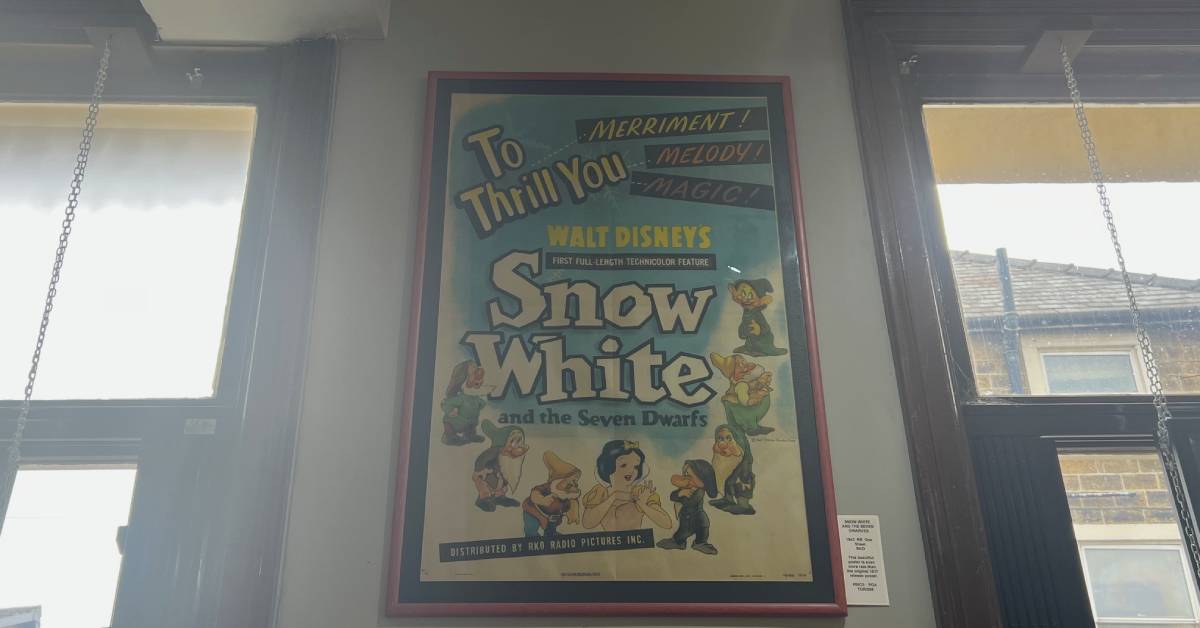 Eric, who is a self-confessed Disney fanatic, said:

“An ordinary Snow White from the first release is about £30,000 and this one is rarer.

“It was the first re-release of 1942, so it was in the war and it had a very small run in just a few cinemas.

“Whereas there were a lot done for the first release, there was probably only a few hundred done for that. It is in immaculate condition.

“The large Flame of New Orleans poster was £8,000 when I bought it and that was 30 years ago and we can’t find another one. So we have a lot of posters that we don’t know the exact value of. If someone was seriously going to buy it, we would obviously find out.”

Eric also showed me a rare 2002 Spiderman poster, which was withdrawn following 9/11 as the Twin Towers can be seen reflected in the superhero’s eye. 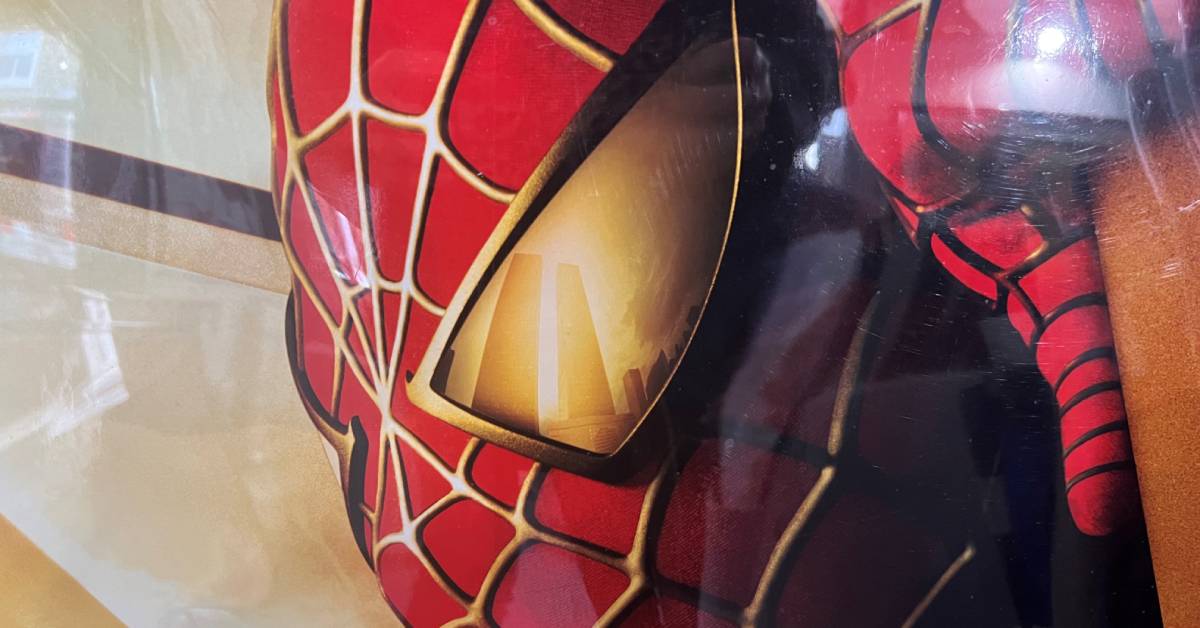 The rare 2002 Spiderman poster, with the reflection of the Twin Towers in the superhero’s eye.

There is also a Pulp Fiction poster that features Uma Thurman smoking Lucky Strike cigarettes, which was withdrawn after the film company was sued by Lucky Strike.

“It’s details like this that can make posters more valuable.”

When it comes to posters with the most value, there is a £20,000 Star Wars poster on display that was only ever used for the British premier.

“It was literally only used for that day. It was a  concept poster so the images don’t even look like the actors. That’s why it is £20,000 because it is so rare.”

“You just have to get the right poster. We’ve got Harrison Ford’s Blade Runner. We had that on for £2,000 two weeks ago. Then there was a sale at Christie’s and it doubled in price. They will never go down in value.” 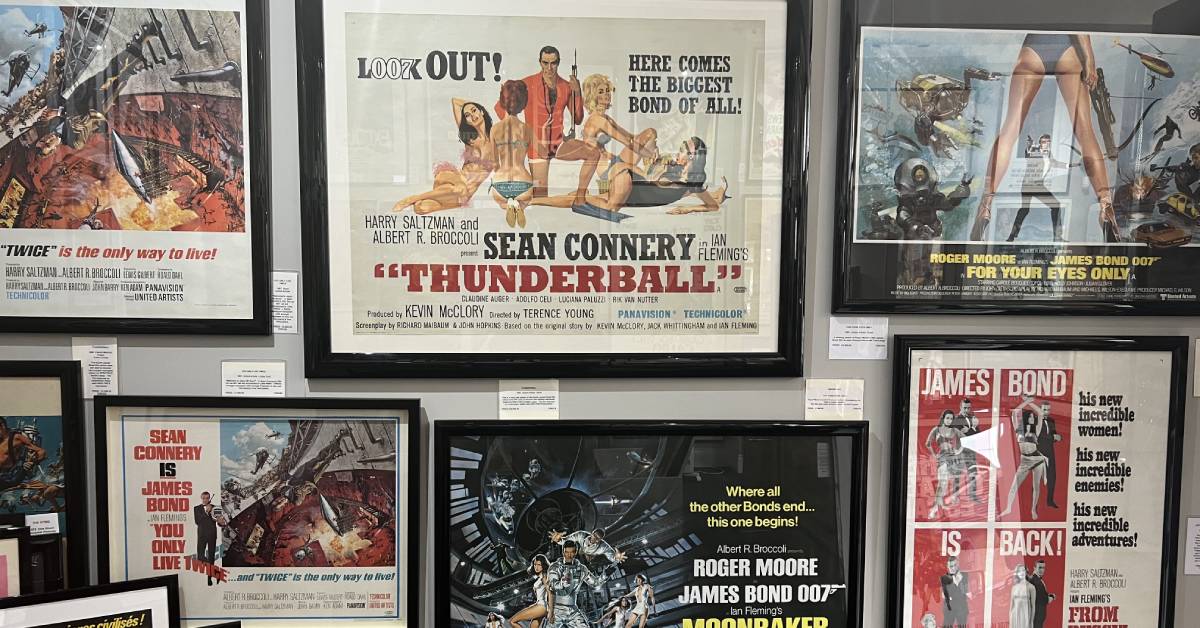 A collection of James Bond posters, including a rare £20,000 Thunderball poster.

‘The best poster ever made’

Eric then showed me Alfred Hitchcock’s Vertigo, which he said was considered the “best poster ever made”.

“It’s by an artist called Saul Bass and he revolutionised poster art. We’ve got a lot of his work. It’s so fascinating when you get into it.

“You never know what people are going to buy. Someone had Shrek 3 on their list the other day. Someone came in asking if we have Burt Reynolds posters.

“We had three people all battling for a signed Back to the Future poster.

“I always say if you can hang it over your bed it’s a good test.” 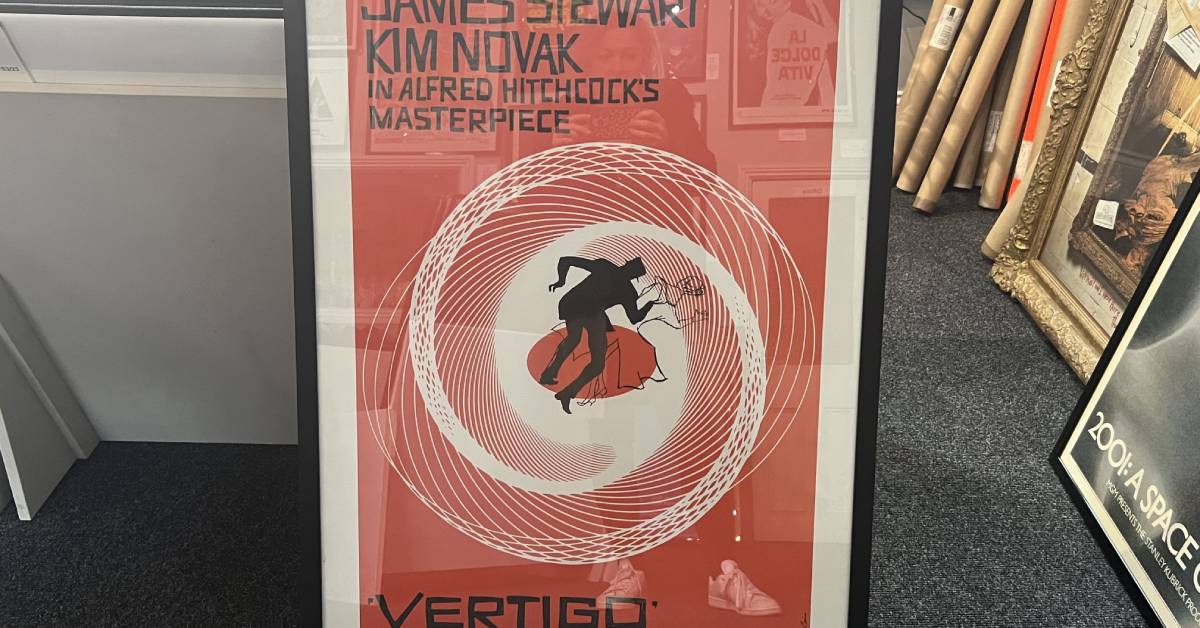 Hairdresser to the stars

When you delve into Eric’s amazing history, you learn that he actually knew many of the stars named in the poster billings.

He worked at the iconic Vidal Sassoon hairdressers on Bond Street, London, from 1966.

“A lot of the stars, I’ve done their hair. I’ve worked on a million movies, including Rosemary’s Baby. We did Mia Farrow’s iconic pixie cut.

“I worked on Clockwork Orange. I’ve done Faye Dunaway, Diana Ross, Shirley MacLaine, Charlotte Rampling and Carrie Fisher. I worked with Dave Prowse, who was Darth Vader. They were all lovely. I did most of the stars from the 60s, but I never did Elizabeth Taylor or Raquel Welch.

“I did Tim Curry, from the Rocky Horror Picture Show, Peter O’Toole, Richard Burton and Adam Faith. We weren’t meant to do men’s haircuts but the wives used to send them to us.”

It was at this point that Eric casually threw in that he used to run rock gigs at London’s iconic venues, the Red Cow and the Nashville.

“When the Bond Street salon closed, I thought I better do something else.”

When his parents became ill 20 years ago, he returned to North Yorkshire, where he now resides in a house in Thornthwaite.

Eric, who still has a house in London, said:

“I’m originally from Harrogate and my first job was at Peter Gotthard’s. Peter had the contacts at Vidal Sassoon.”

It was thanks to his work at Vidal Sassoon that he managed to get hold of some of his posters – many of which he got signed by the stars.

“I got Madonna’s, as I did her PA’s hair, Julie Andrews, Christopher Lee, the Reservoir Dogs cast. We’ve got a lot of signed posters.”

However, he has yet to have any celebrity clients visit the gallery, which he puts down to not advertising the venue. Eric said he wanted people to organically find it. He didn’t even want an online presence, but eventually caved due to frequent requests from customers.

“There’s no gallery outside of London like this. The aim is to bring people to Pateley Bridge.

“It’s working because people are talking. We’ve had people coming from as far as Jersey and Scotland.”

When asked to pick a favourite, he pointed out an Italian version of Andy Warhol’s Heat.

“It’s pure Andy Warhol and I bought that from Christie’s probably 40 years ago. It’s been over my bed for 30 years.” 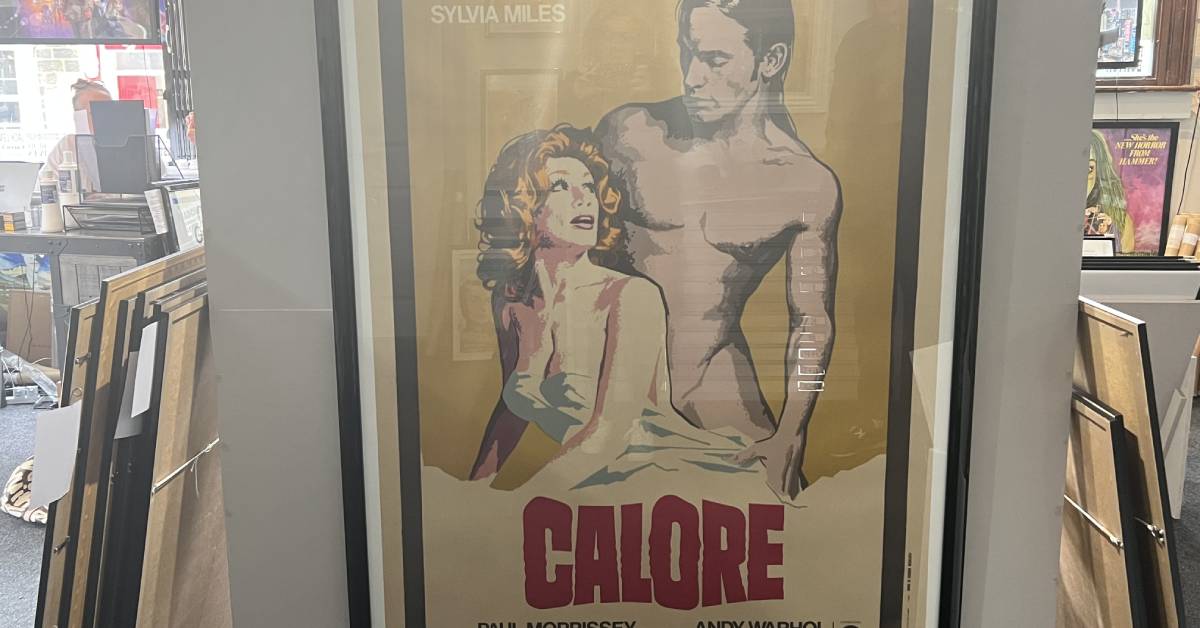 He also showed me a rare 50-year-old film poster of A Bigger Splash, featuring one of David Hockney’s famous LA pool paintings, before casually dropping in that he used to hang around with the artist.

“I used to meet him in the clubs in Paris. I always thought he wasn’t quite on my level!”