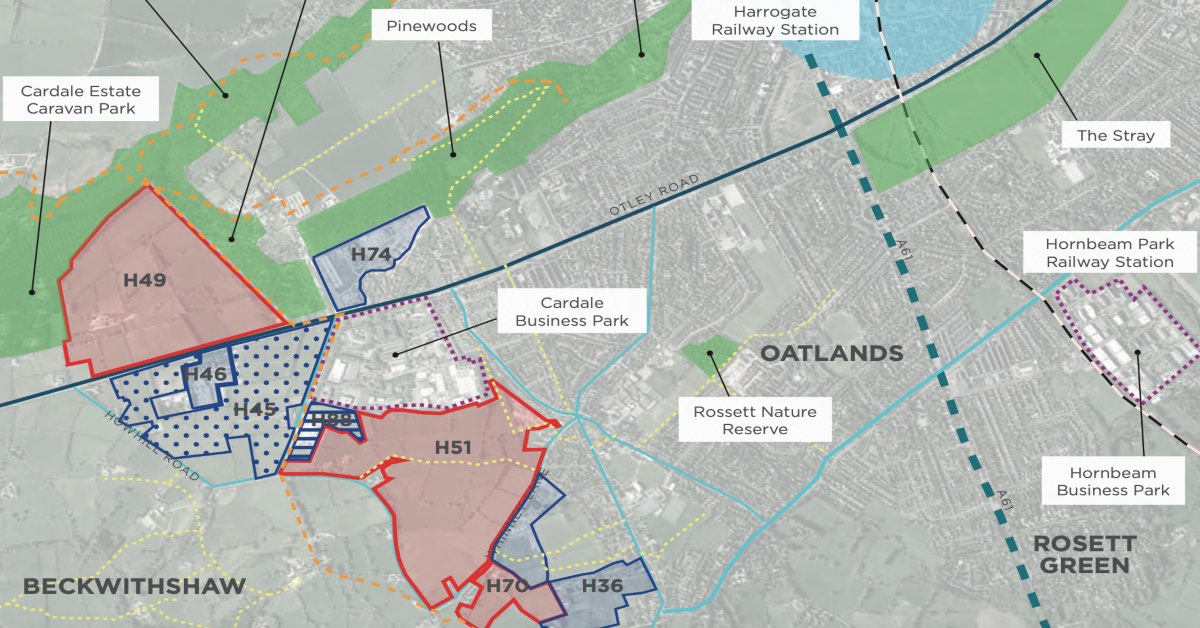 A draft version of the plan showing where development is earmarked.

Two key planning documents which have been hit by delays and dismay ahead of a huge urban expansion in west Harrogate will cost taxpayers £25,000, it has been revealed.

The West Harrogate Parameters Plan and a delivery strategy set out how the area’s infrastructure and services will cope with 4,000 new homes.

They have been produced by Harrogate Borough Council, which has worked with North Yorkshire County Council, housing developers and consultancy firm Hyas.

After being forced to defend the plan and announcing delays for the delivery strategy, the borough council has now confirmed Hyas will be paid £25,000.

The council also said the delivery strategy will be signed off in autumn – more than two-and-a half years after a government inspector ordered the creation of the plans.

David Siddans, secretary of Harlow and Pannal Ash Residents Association, said he has been frustrated by the “snail-like progress” of the plans and that he has “little confidence” they will address concerns over areas including traffic congestion which is already a major problem.

“We are concerned that reorganisation of local government, lack of money and pressure from developers will force developments through with inadequate infrastructure, leaving the community to pick up the pieces.

“At the very least the combination of the parameters plan and infrastructure delivery schedule should address the massive growth on the western edge and go some way to mitigating against existing problems.

“In other words things should be no worse.

“We remain unconvinced that this will be the case.”

“It remains to be seen whether the £25.000 spent will prove cost-effective.

“As all matters have been handled without serious interim consultation with stakeholders, we won’t even know if Hyas’s recommendations have been followed.”

Once complete, both the delivery strategy and parameters plan will be used together to shape decisions on how west Harrogate will cope with 2,500 new homes – although as many as 4,000 properties are set to be built in the wider area by 2035.

There are proposals for two new primary schools and four playing pitches, as well as two new local centres for shops and health services.

Land has also been designated for other businesses, as well as new cycle lanes, footpaths and bus routes.

As part of the delivery strategy, a review of existing infrastructure is being carried out ahead of the document being published in draft form during a public consultation.

A Harrogate Borough Council spokesperson described Hyas as a “specialist town planning, master planning and place-making consultancy” firm which was commissioned “based on their experience of other complex development schemes”.

“The West Harrogate Infrastructure Delivery Strategy document is part of their commission and is a joint piece of work – in collaboration with the borough council, county council and promoters – to provide the long term co-ordination of infrastructure across the west Harrogate sites.

“The document will be signed-off in the autumn as it requires the input from a piece of work regarding transport mitigation which won’t be concluded until then.”