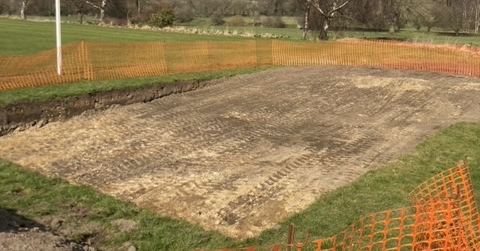 The new boules courts in Darley are set to be completed next week.

A new boules court will be built in Darley next week to add to the growing community facilities.

The project is being organised by Darley Playing Fields Association, which already manages the nearby children’s play area and football pitch as well as leasing out the pavilion to farm shop Crimple Valley Fresh.

Using volunteers from nearby Menwith Hill and the Men’s Shed at Pateley Bridge, the group hopes most of the work will be completed next Friday, ready to open the new court in time for Easter.

“We only have a relatively small area and we wanted something different that’s not very common and would appeal to people of all ages.

“We know someone who has played boules in the past, and the landlord of the local pub is French, so we thought, ‘let’s see if there is interest’.”

A survey of villagers followed at the beginning of this year, with an impressive 99% of those who responded supporting the idea of a boules court on the Station Road site. The playing fields association then sought funding and materials from their contacts to bring the project together.

As well as money from the National Lottery Community Fund, Darley and Menwith Parish Council has supported the work and will fund two benches by the courts to mark the Queen’s platinum jubilee. The project could cost up to £12,000 in total, though the committee is hoping to use its contacts to get discounted materials.

Once open, the court will be available to play on free of charge. With no other boules courts in Nidderdale, players could travel from around the area to enjoy the new facilities, which the playing fields association hopes will also bring more income to the shop in the pavilion.

“We’ll have sets of boules in the shop to rent. If people are keen and want to start a competition, we will happily facilitate that with hire of the court for a charge.

“If there’s interest, we could end up with people joining leagues too.”