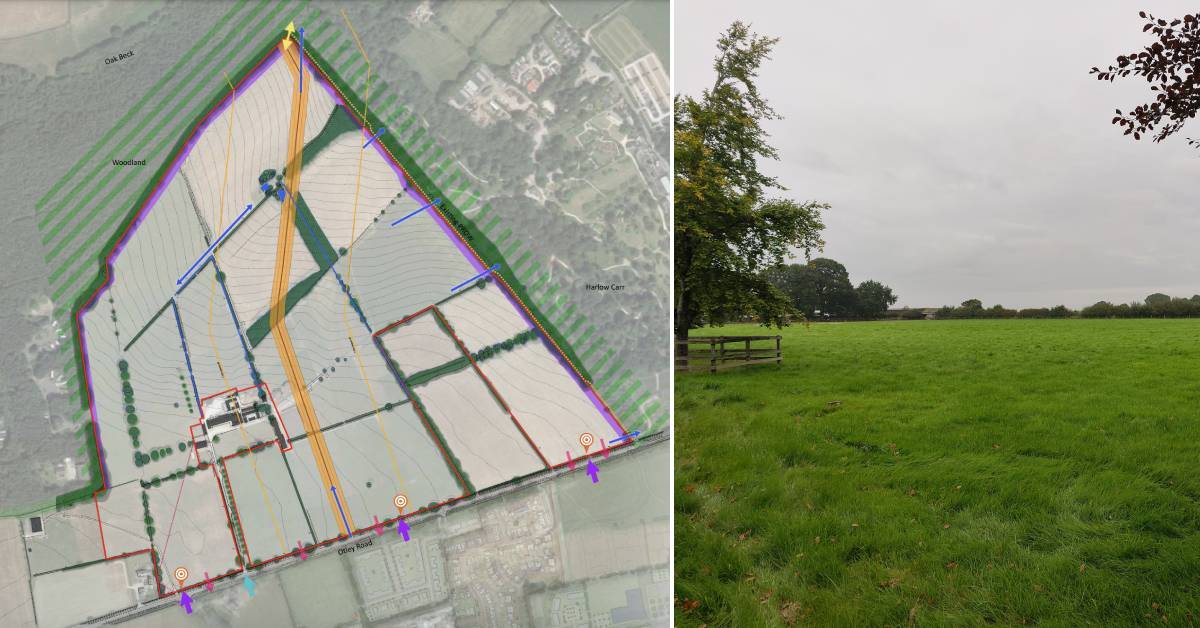 A computer generated image of the proposal from above and one of the fields today off Otley Road.

A major 780-home development and new primary school could be built on Otley Road near Beckwithshaw.

The Windmill Farm development would be the largest housing scheme to be built in Harrogate for many years. It would dwarf the nearby village of Beckwithshaw, which has a population of 400.

The housing would be built on green fields on the opposite side of the road from the charity-run nursery Horticap and behind RHS Harlow Carr. Part of the land is currently used by Beaver Horse Shop.

Four hundred of the homes would be built by Taylor Wimpey UK and the remaining 380 by Redrow Homes. Johnson Mowat said 32% of the site would remain as “open green space”.

A website containing details of the development invites people to give their thoughts. No formal planning application has been submitted yet.

“The site is considered a suitable location to meet the need for new homes, it is well located with ideal access to Harrogate town centre and good public transport networks.|

The site is allocated for development in Harrogate Borough Council’s Local Plan, which is a document that lays out where development can take place in the district until 2034.

A preliminary scoping application approved by the council in 2019 suggested 1,000 homes and two primary schools could be built on the site.

If the Windmill Farm development is granted full planning approval, it would mean over 1,200 homes could be built on that section of Otley Road.

A spokesperson for Harlow and Pannal Ash Residents Association told the Stray Ferret it was “very concerned” about the scale of the Windmill Farm development and its impact on the environment.

“When added to the other developments proposed for this section of the Otley Road we remain unconvinced that such a development will prove sustainable.

“Given the scale of what is being proposed, we believe that there needs to be a full consultation event for the wider public, that should also include Bluecoat Park to share their views.”