0 Items
Are Harrogate’s high housing costs to blame for the hospitality recruitment crisis?
by 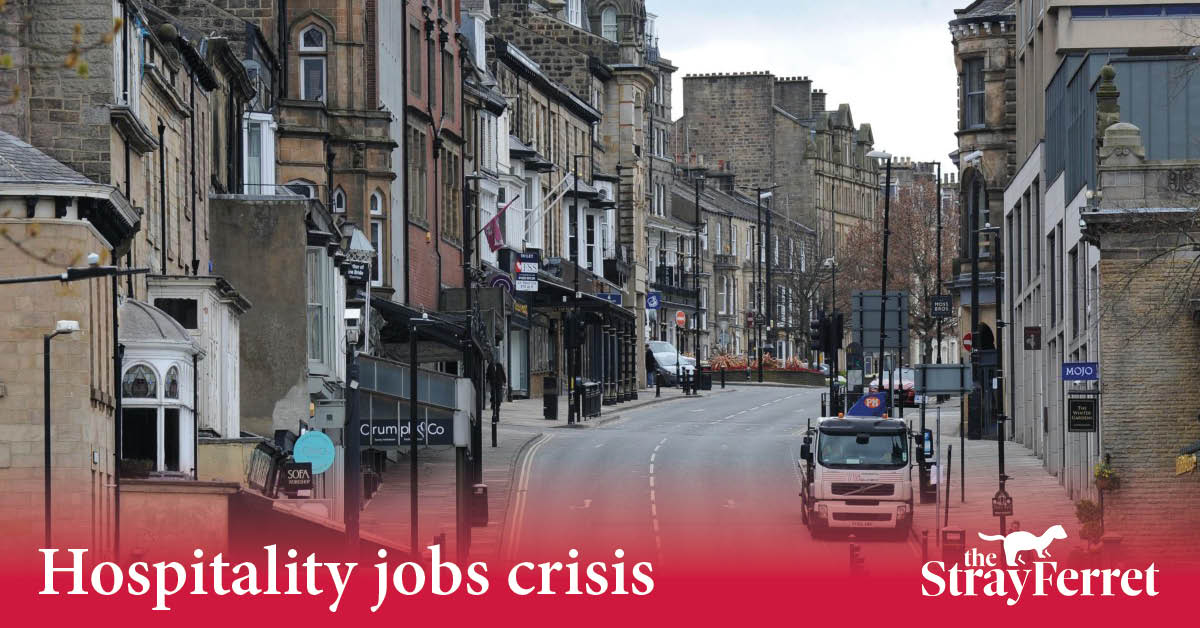 A recruitment crisis at Betty’s forced the famous cafe to close its doors early last week — and other Harrogate hotels, pubs, and restaurants have spoken of difficulties in employing people.

But could Harrogate’s notoriously high rental and property costs be to blame?

The average rental property in Harrogate for a one-bedroom flat is £656 a month. For an adult earning full-time minimum wage at a local bar, this would make up more than half their monthly pay packet — and that’s before council tax, bills and other expenses.

The Stray Ferret spoke to two people who work in housing in Harrogate to ask if the two are linked.

Sarah Hart helped create Harrogate Community Land Trust four years ago after becoming demoralised with the cost of housing in the town.

She thinks high living costs have made Harrogate an unviable option for people earning hospitality wages. She predicts more venues will be forced to reduce their opening hours due to staff shortages.

“House prices and rents have been pushed up even further whilst wages haven’t. It’s a crucial link and we’re at a critical point. It’s not a housing crisis, it’s becoming an armageddon situation.”

Ms Hart says that with both petrol prices and housing costs increasing, hospitality workers who could commute to Harrogate from Bradford and Leeds will decide to find jobs closer to home.

She believes an intervention in the housing market such as rent caps is needed so hospitality workers can afford to rent in the town.

Rent caps have been used in Germany and the Mayor of London Sadiq Khan also believes it could help solve the housing inequalities in the capital.

“Housing in Harrogate benefits the few and not the many.

“If people had lower rent they’d have a higher disposable income.

“I met someone from Harrogate paying 60% in housing costs. There’s nothing left at the end of the day. No money for summer holidays or for her kids to do to stuff. If she had a lower rent she’d have money to spend in the local economy. It’s as basic as it gets.”

‘You’ve got to earn your keep’

Harrogate-based property consultant Alex Goldstein believes that job shortages in hospitality are primarily due to covid and not high property or rental prices.

Mr Goldstein said property prices and rents have increased in Harrogate whilst wages have stagnated but he believes it’s wrong to suggest that Harrogate’s economy is overly dependent on low-paid hospitality workers. He thinks that increasing housing costs are good for the town as it brings in investment.

“Some people feel they’ve been left out in the cold. You’ve got to earn your keep. If you can’t afford to live in Harrogate you should move elsewhere.

“You work up the ladder and Harrogate opens up for you. You’ve got to bide your time. If you can’t afford something, you can’t afford it. A lot of society wants it here and the world doesn’t work like that.”

On the subject of rent caps, Mr Goldstein said the “draconian” measure would unfairly hurt investors who purchase buy-to-let properties in Harrogate which he believes gives the local economy a boost. He said: “We can’t make sweeping changes to the market”.

“Harrogate has always been an expensive part of the world and it’s increased hugely.

“But there will always be winners and losers.

“I would like to live in Mayfair with a Lamborghini, but I can’t afford it.”

Owners of Harrogate hospitality venues have complained for years that it’s not easy to fill roles pulling pints or waiting tables in the town.

Whether this is because of low wages, Brexit, undesirable working conditions, too many bars and restaurants, or high living costs, it is difficult to pinpoint the exact reason.

But in Harrogate, there is a feeling the issue of attracting and keeping good hospitality staff won’t be solved anytime soon.

Tomorrow we’ll be looking at the acute shortage of chefs and the impact of Brexit on the recruitment crisis.