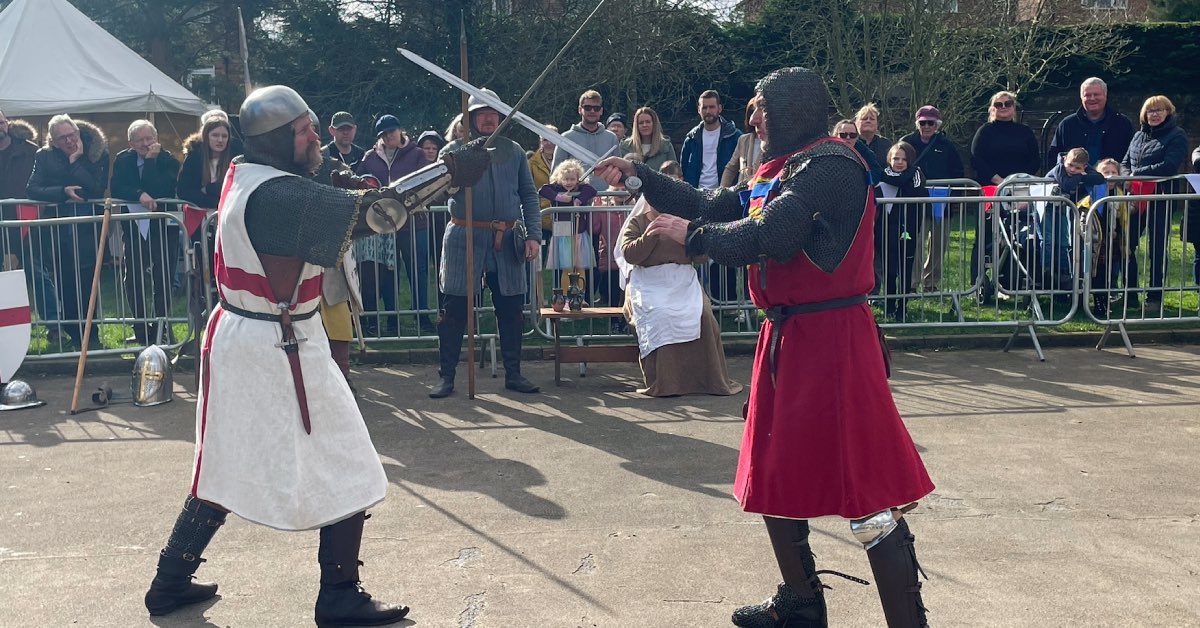 3 Swords re-enactment group will be returning to Boroughbridge.

Commemorations marking the 700th anniversary of the Battle of Boroughbridge will end this month with the unveiling of a permanent battlefield trail.

The trail will guide people around sites where fighting took place in 1322.

The Battle of Boroughbridge was fought on March 20, 1322, between supporters of King Edward II and a rebellious group of barons led by Thomas, Earl of Lancaster. It ended in defeat for Lancaster, who was the king’s cousin and one of the wealthiest people in England.

A series of events have taken place this year marking the anniversary.

In March, Viscount Hereford, an ancestor of Humphrey de Bohun, who was killed in fighting across the original bridge over the River Ure, took part in a wreath laying ceremony at the Battle Cross in Aldborough. 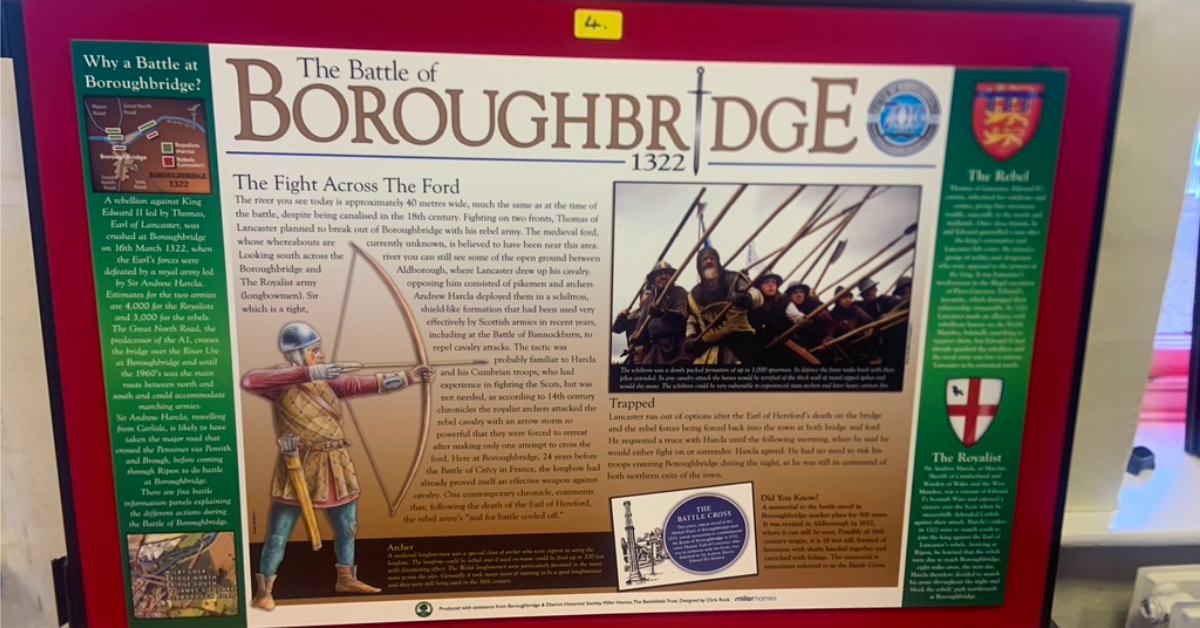 The trail will tell the story of Boroughbridge’s turbulent past.

On Saturday, August 13, 3 Swords, who make regular appearances at the Royal Armouries in Leeds, will return to give a demonstration of their arms and equipment at Hall Square in Boroughbridge at 10am before a parade to St James’s Square.

At 11am, Boroughbridge mayor Sean Hynes will unveil one of a series of display boards, which form the Battle of Boroughbridge interpretation trail.

The boards will be sited at either end of the bridge over the River Ure, on St James’s Square where Lancaster was captured after seeking sanctuary in the original church, on Aldborough Road and near the lock on the canal at Milby.

After the ceremony, Louise Whittaker, of Harrogate, a member of the Battlefields Trust, will lead a tour of the battlefield sites.

The 700th anniversary has been marked by Boroughbridge and District Historical Society, the Battlefields Trust and Boroughbridge Town Council, with funding from Miller Homes, which has built housing on part of the battlefield site.

Medieval artwork designed by the Yorkshire region chair of the Battlefields Trust, Chris Rock, has been incorporated into the display boards and an accompanying leaflet to provide a permanent battlefield trail around the town.

What was the Battle of Boroughbridge?

The king’s army was led by Sir Andrew de Harclay, who managed to prevent Lancaster’s forces fleeing north to Dunstanburgh Castle in Northumberland by blocking river crossings at the narrow, timber bridge and at a nearby ford.

After an overnight truce, during which Edward II’s army was reinforced, the royal troops entered Boroughbridge and arrested Lancaster. He was taken to his own castle at Pontefract and sentenced to death after a show trial. Lancaster was beheaded on March 22.

The rebellion had begun after Lancaster, a former member of the royal court, became disillusioned with Edward, whose reign was marked by military failure and constant internal disputes.

The Battle of Boroughbridge raged around a timber bridge crossing the River Ure and a ford, believed to be to the east of the present town, possibly between Milby and Aldborough. 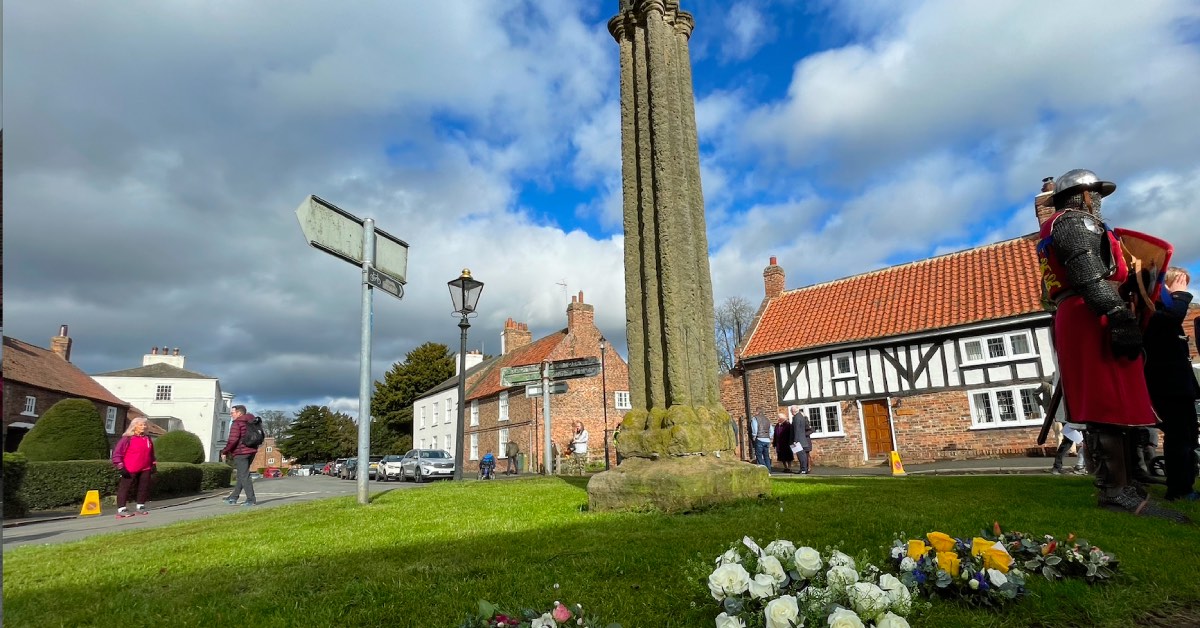 Wreath laying at the battle cross in Aldborough in March.

When Lancaster’s army, which probably amounted to a total of 3,000 men at arms with their followers, arrived at Boroughbridge, Harclay was already in possession of the bridge and the ford, which proved to be a strategic advantage.

The royal army numbered 4,000 men. At the ford its pikemen were deployed in a schiltron formation, a defensive shield, which they had learned from the Scots in the Scottish Wars. The king’s bowmen created mayhem against Lancaster’s cavalry.

The rebels divided into two columns, led by the Earl of Hereford and Roger de Clifford, of Skipton Castle, who attacked the bridge on foot, and Lancaster, who attempted a cavalry charge at the ford. Both ended in chaos.

One chronicle relates how Hereford was killed by a spearman, who thrust into him from below the bridge. Clifford also suffered serious injuries. Heavy archery fire from the bowmen forced Lancaster’s force to retreat before reaching the ford.

Lancaster negotiated an overnight truce with Harclay, but by morning many of the rebels had deserted. When the Sheriff of York arrived to reinforce the king’s army, Lancaster had to surrender.

He was taken to his home at Pontefract Castle where he was sentenced to death, originally to be hung drawn and quartered, but he was given a merciful beheading.

Thirty of Lancaster’s followers were executed in towns around England, including Roger de Clifford, Second Lord of Skipton, who was hung from Clifford’s Tower in York, which now bears his name.

Edward made Harclay the first Earl of Carlisle for his service at Boroughbridge. Only a year later Harclay was accused of treachery for making a peace treaty with Robert the Bruce without Royal approval.

Harclay was sentenced to death at a hearing in Carlisle and he was hung, drawn and quartered. His head was delivered to King Edward at Knaresborough Castle before being hung on London Bridge. Parts of his body were displayed in Carlisle, Newcastle, Bristol and Dover.