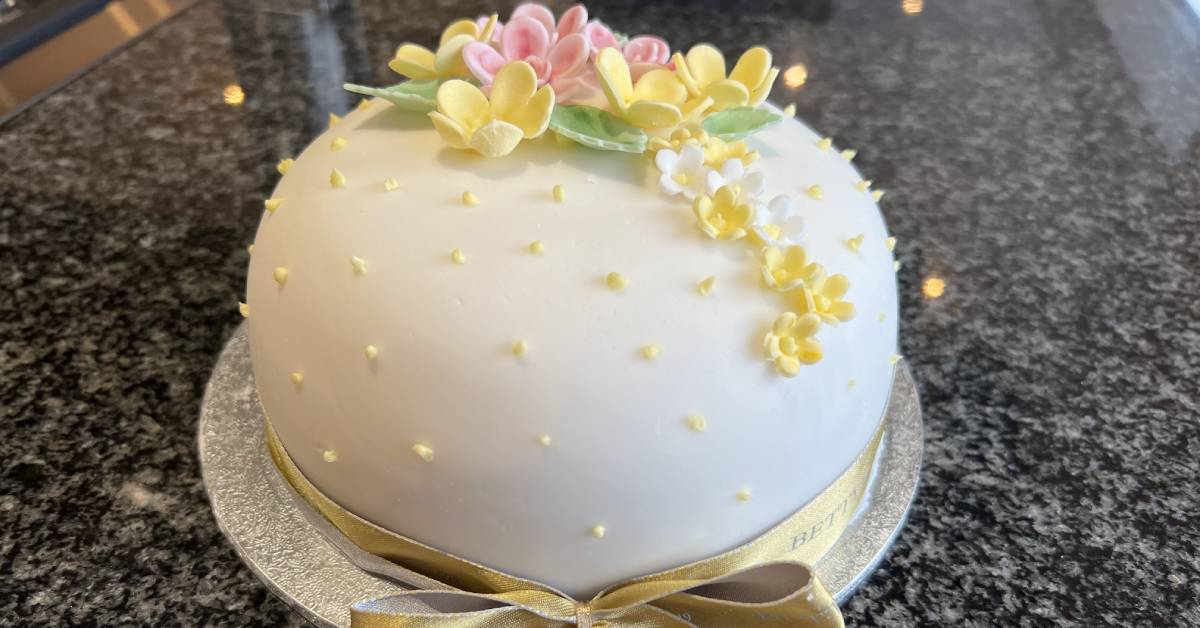 The cake I decorated at the The Icing on the Cake course at Betty's Cookery School.

“It’s so good to be back”, said product and innovation manager Lisa Bennison as I stepped into Bettys Cookery School.

This sentiment was echoed from the whole team, who were all clearly grateful to be doing what they love again.

The school, which launched in 2001, has recently opened its doors to customers again following a two-year closure during the pandemic.

So it genuinely felt quite emotional to be back in the warm glow of the familiar classroom. It served as a stark reminder of the hardship the hospitality industry has had to endure. 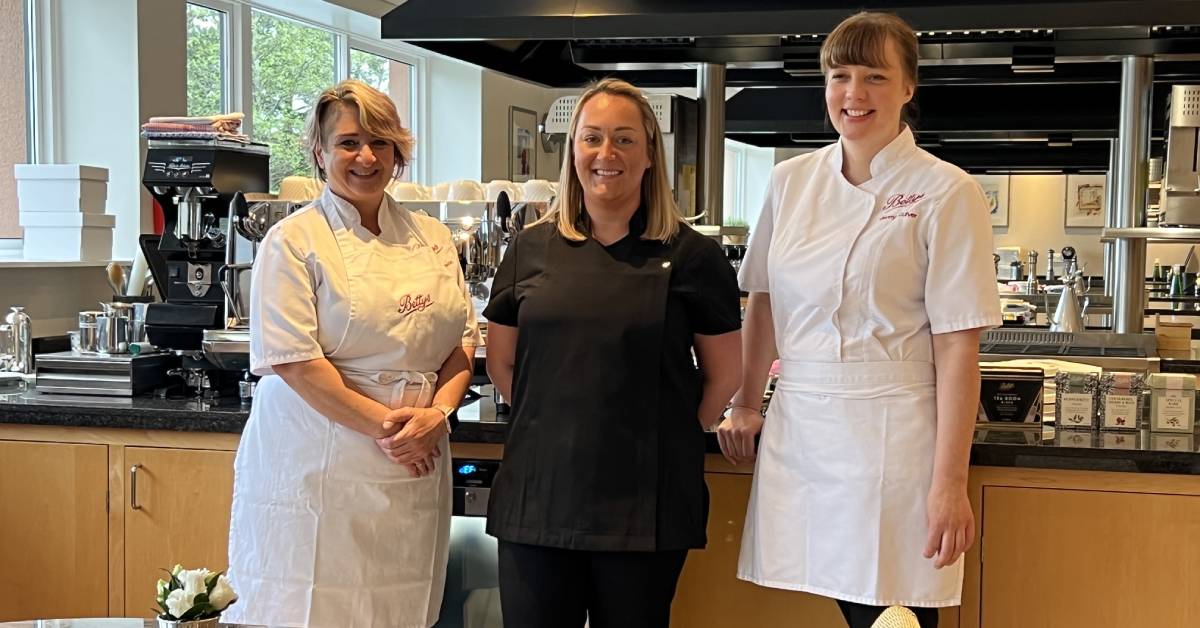 The team at Bettys Cookery School.

The icing on the cake

I was there for the ‘The icing on the cake‘, a full day’s course, which would see me attempt to emulate Bettys’ world-renowned sugar craft skills.

With the Queen’s Platinum Jubilee coming up, it was perfectly fitting for all the impending afternoon teas and picnics. I hoped it was going to inspire me to get in the kitchen and avoid my usual quick-fix M&S visit. 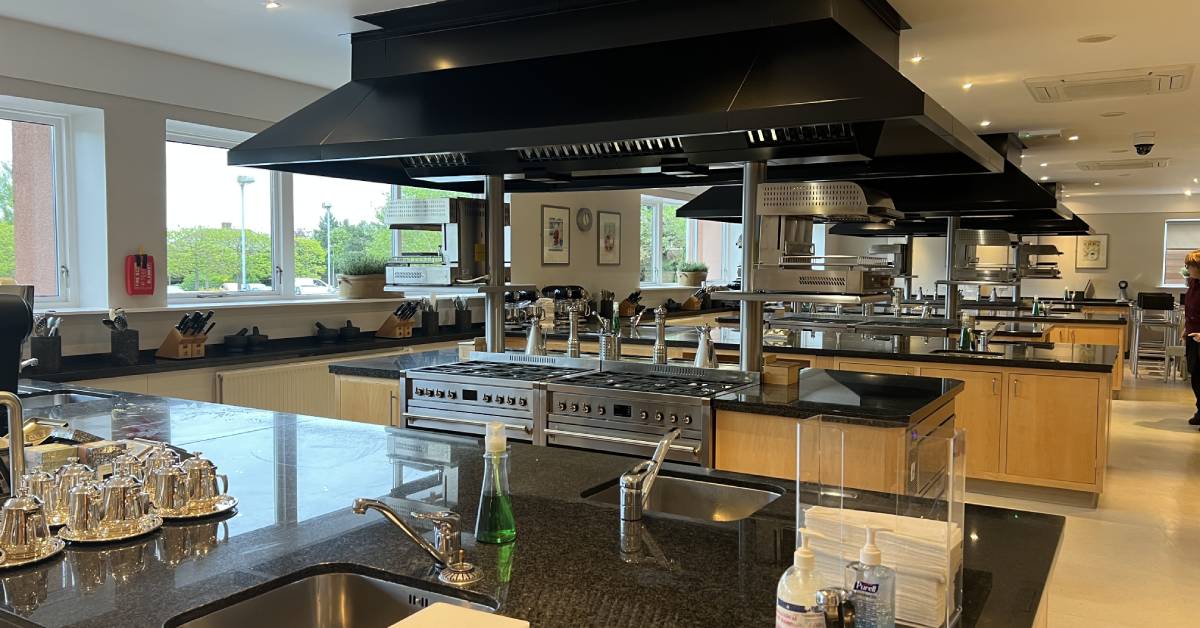 After a coffee and a warm pain au chocolat, we headed over to the demonstration bench where we were introduced to our tutor for the day, Jenny Culver.

Jenny has worked her way up through the ranks at Bettys and is like a walking encyclopaedia for the brand. Desperate to know how the famous fondant fancies are made? She’s your gal.

Her enthusiasm is infectious and she’s obviously incredibly skilled at what she does too.

I was relieved to be told that we didn’t have to make the Genoese sponge or buttercream, as I knew then it would at least be edible.

I was even more delighted when Jenny explained that one of the changes that had been brought in was no washing up! This meant more time to perfect those culinary skills.

The course is split up into three sections throughout the day. This sees Jenny demonstrate up to a certain stage, before you are then let loose in your own mini kitchen area, complete with all the equipment you need. In my case, all the gear and no idea. 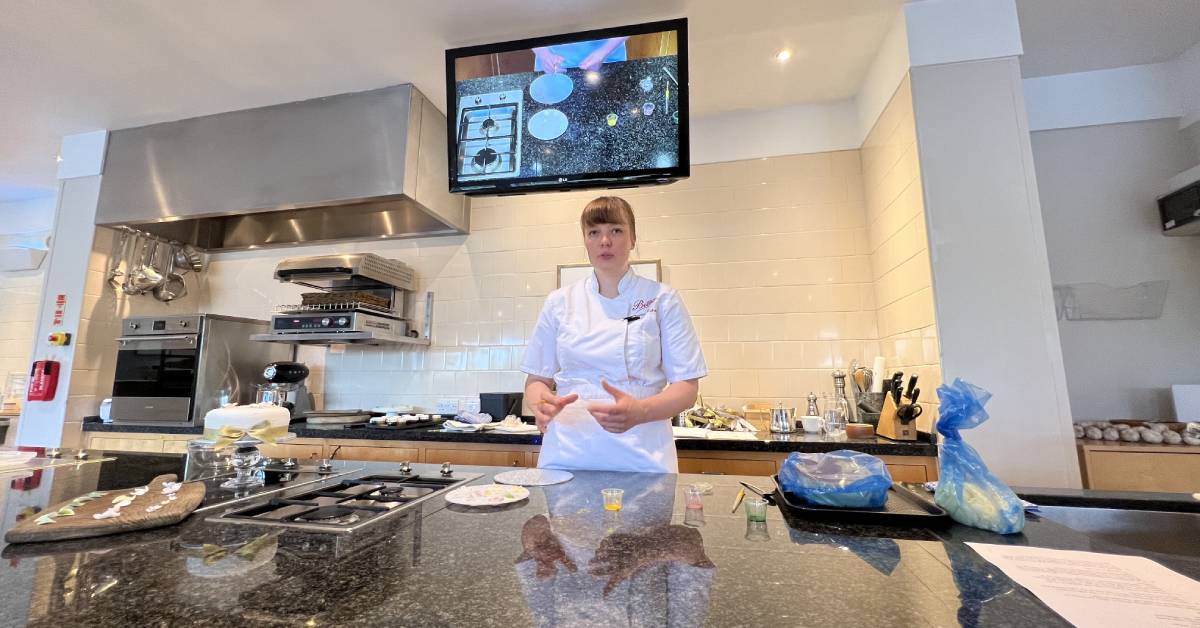 Jenny started by showing us how to create the decorations, in this case intricate flowers, using petal paste.

“Preparation is key,” said Jenny, as she demonstrated how to delicately colour and work the paste.

She then rolled it out thinly, using oil on her hands to stop it drying out, and sprinkled cornflour on the worktop to prevent it from sticking. 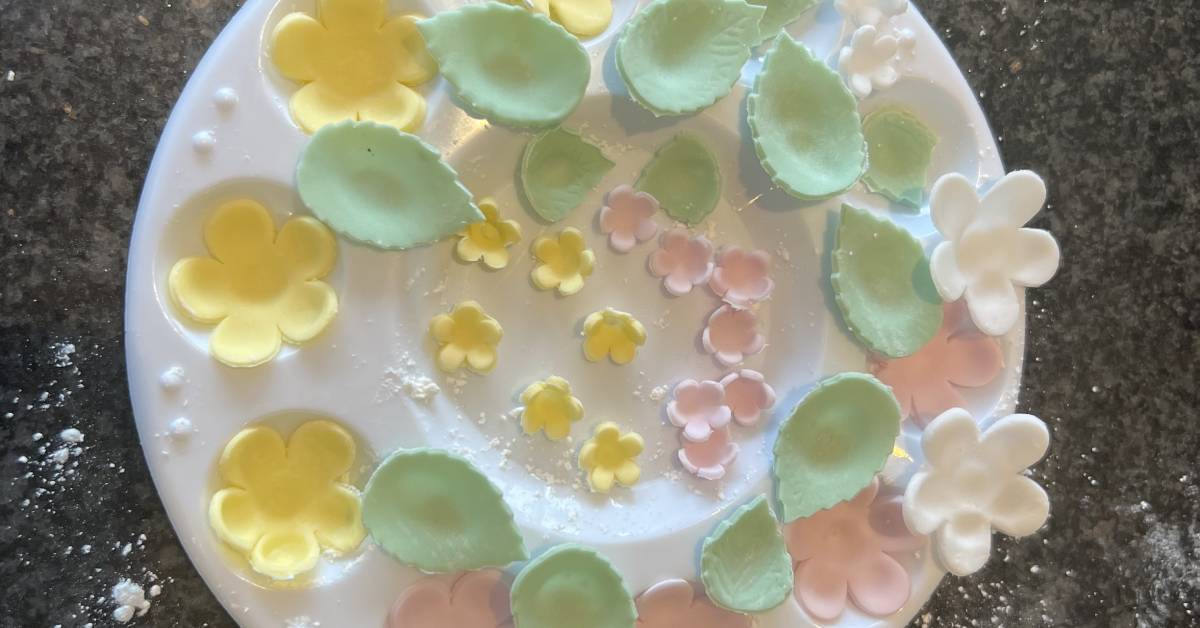 My flowers and leaves before adding the edible lustre.

Jenny then cut out the decorations and thinned the petals and leaves with a small plastic tool that resembled a crochet hook. She then added definition and brought them to life with edible lustre.

She made it look ridiculously easy, so I set to work feeling pretty confident.

Harder than it looked

This misplaced confidence quickly diminished when I realised it was a lot harder than it looked. The secret is cutting them out quickly before the paste dries out and hardens.

I couldn’t understand why my edible lustre was so dark and grainy until Jenny pointed out I’d been wetting my brush, like a painter, when it should be applied dry…

Our second demonstration saw Jenny teach us how to assemble the cake. After removing “the crumb” and cutting the cake in half, Jenny filled it with raspberry jam and buttercream. 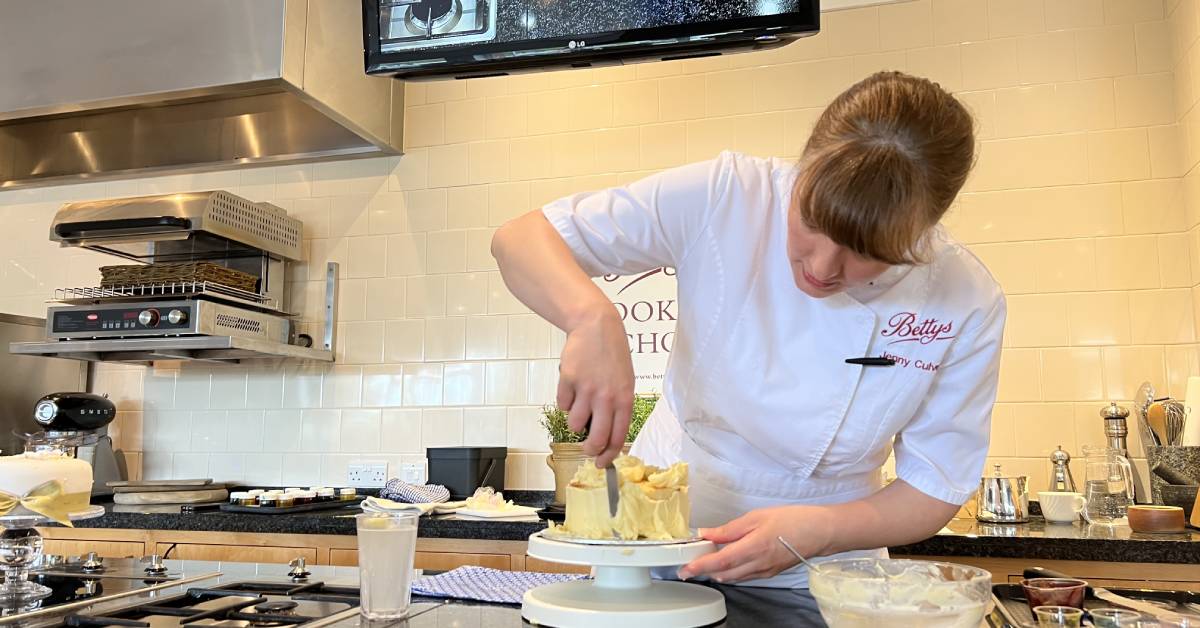 Jenny applies the buttercream to the sponge.

To make it more pliable, she advised giving both a good stir so it’s easier to apply. And with the buttercream, more is more, apparently. Apply a lot more than you need and then smooth it out with a palette knife dipped in hot water to make it more spreadable.

At this stage, I had to keep reminding myself not to eat all the buttercream before smothering it on the cake.

After an exquisite two-course lunch – a salmon salad and zesty cheesecake – we were then taught how to roll the icing and marzipan out. 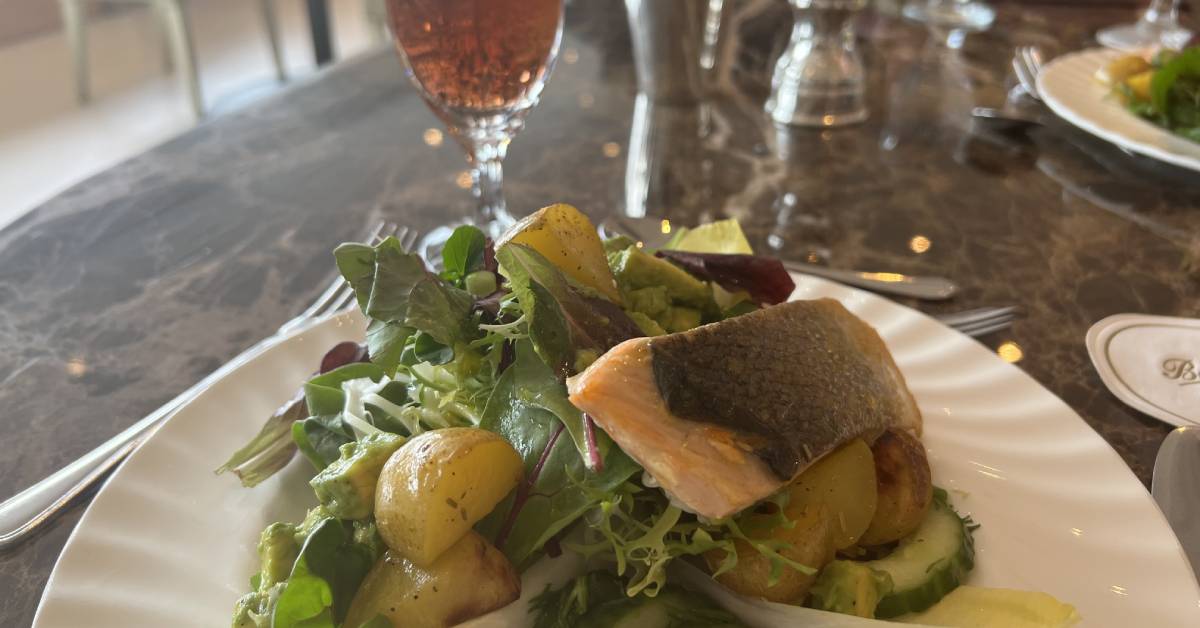 I didn’t realise that the best way to work out the ratio of icing to the cake was to simply measure it with string. Mind blown.

Plastic rolling pins are also better than wood, as the grain then doesn’t leave marks. You also use it to carefully lower the icing on to your cake. 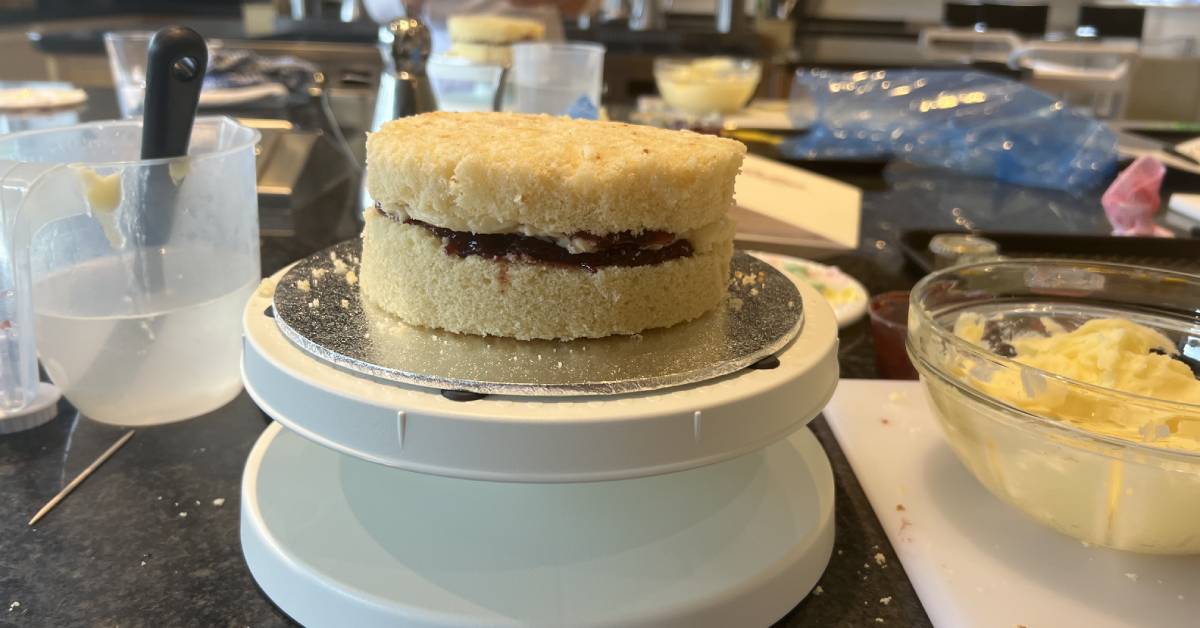 My sponge just before I added the buttercream, marzipan and icing.

Once you’ve done this, you smooth it all out and cut off any excess. I naturally cut off too much so had to patch it up slightly.

At this point my cake definitely resembled a bowler hat – bulbous in shape – which apparently is really difficult to achieve. Obviously this was intentional…

Our final demonstration saw us learn how to hand pipe with royal icing and carefully attach our decorations.

It’s recommended to practise your writing skills on the counter, before attempting it on the cake. I stuck with little dots, which were significantly easier.

And then it was finished off with a pretty gold Bettys ribbon.

I actually surpassed my own expectations as it wasn’t terrible.

It was incredibly rewarding to create something so intricate, and actually quite therapeutic and mindful. Maybe I should tap Bettys up for a job?

On second thoughts, considering how long it took me to make the flowers, it would probably be best to leave it to the professionals. 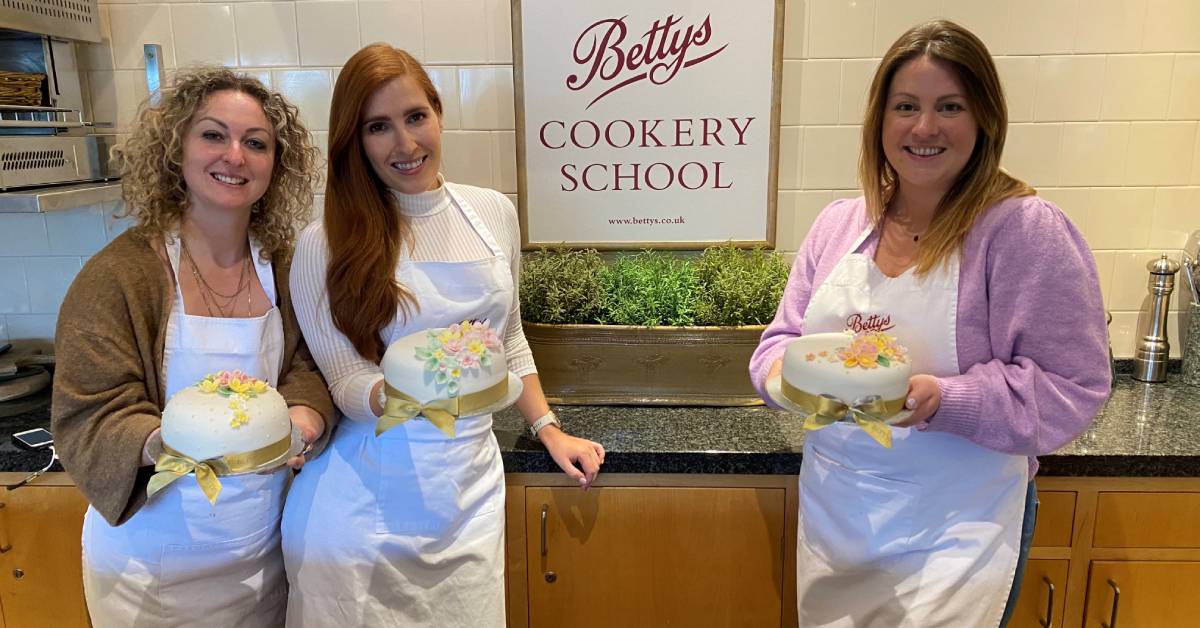 (L-R) Me and my fellow bakers, Beth Windsor and Victoria Turner with our finished cakes.

Your chance to enter the Bettys Jubilee Bake Off

Bettys is looking for a special baker who can create a cake fit for a Queen.

Our shortlist of five incredible bakers will then take their cake to Bettys Cookery School on June 1 for judging.

The lucky winner will take home a place on a course of their choice at Bettys Cookery School as well as bragging rights.

Find out more about the competition and how to enter here.

Paddleboarders will pick litter on the river in Boroughbridge this weekend as part of a global movement to clean the planet. https://buff.ly/3lr3bRH