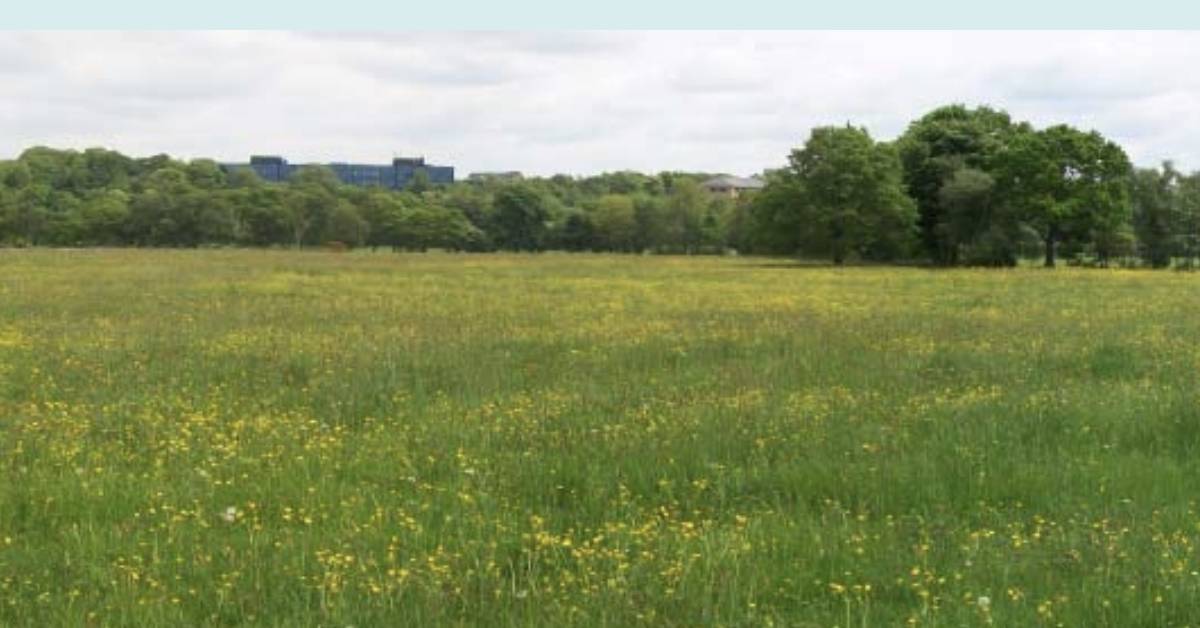 The entrance of Bluecoat Wood looking towards Cardale Park.

560 homes have been proposed for fields near Harlow Hill in Harrogate- 25% more than the number of homes agreed in the council’s Local Plan.

The homes, as well as a community hub and sports facilities, would be built directly opposite Cardale Business Park and Harrogate Police Station.

HBC’s Local Plan, which was finally adopted in March 2020 following a tortuous process, says 450 homes can be built on the fields.

A spokesperson for Harlow & Pannal Ash Residents’ Group (HAPARA) said it was “extremely disappointing” that Homes England wants to increase the number of homes for the site and called on HBC to “prevent large-scale overdevelopment”.

Homes England is also the developer hoping to build 200 homes at the former Police Training Centre on Yew Tree Lane. That site is in the Local Plan for 161 homes and faced similar criticism for “unjustifiable planning creep”.

“The news that Homes England is seeking to increase the numbers of houses on the Bluecoat Wood site from 450, as the Local Plan indicates, to 560 is extremely disappointing but not unexpected.

“This 24.4% increase follows a similar increase applied for on the Police Training Centre site and would result in a 19% increase overall in new housing in the area, compared to the Local Plan provision.

“HAPARA along with others welcomed the Local Plan as giving certainty to the location and scale of housing in this area. However, it is becoming clear that developers are treating the Local Plan as a licence to build as many houses as possible, substantially above the identified need, and the Borough Council seem unable to prevent large-scale overdevelopment.

“So we ask the question: what is the point of the Local Plan?”

A spokesperson for Homes England said:

“The submission of an Environmental Impact Assessment Scoping Opinion Request represents an early stage of the planning process and future development proposals will be subject to further consultation with the local community and Harrogate Borough Council before a planning application is submitted.  The Bluecoat site is identified as a commitment in the Local Plan and will make an important contribution towards Harrogate Borough Council’s housing and infrastructure delivery.”

“The Local Plan sets out a minimum target for new homes, along with allocations and planning policies to guide a sustainable pattern of growth and quality place-shaping. This minimum figure is based on a number of important housing-need factors and has been agreed at the public examination of the Local Plan.

“The appropriate dwelling numbers for each site are determined upon more detailed site masterplanning, taking into consideration important policy matters set out in the Local Plan such as appropriate density and mix of development as well as the provision of infrastructure, open space and facilities. All of these factors need to be considered when assessing the suitability of any proposal at the planning applications stage. Additionally, site H45 falls within the West Harrogate area for which an additional layer of masterplanning is taking place (the West Harrogate Parameters Plan). Homes England have committed to working with the council and the promoters of adjacent sites H51 and H49, to ensure coordinated delivery of infrastructure and quality place making across the area.

“The submission of an environmental impact assessment scoping opinion request represents an early stage in the planning application process and it is too early for us to comment on the appropriateness of the yield for the site until the planning application has been fully worked up, evidenced, consulted upon and can be assessed against the Local Plan as a whole.”

HBC’s Local Plan identifies more than 4,000 homes that could be built on the Western side of Harrogate. Several developments have already been built or are currently underway, including 600 homes by Persimmon Homes at Pennypot Lane.

Homes England said it is in discussions with Harrogate Borough Council, North Yorkshire County Council, and other developers in the West of Harrogate about the upcoming Parameters Plan.

This document will assess transport and infrastructure needs associated with the huge increase in housebuilding. It was expected last year but has been delayed.

The developer has also asked Harrogate Borough Council to now provide a formal opinion on the scope of an Environmental Impact Assessment which it plans to submit at a future date. This will explore how the development will impact on the environment.

However, Homes England bought the site in February after the developer pulled out.