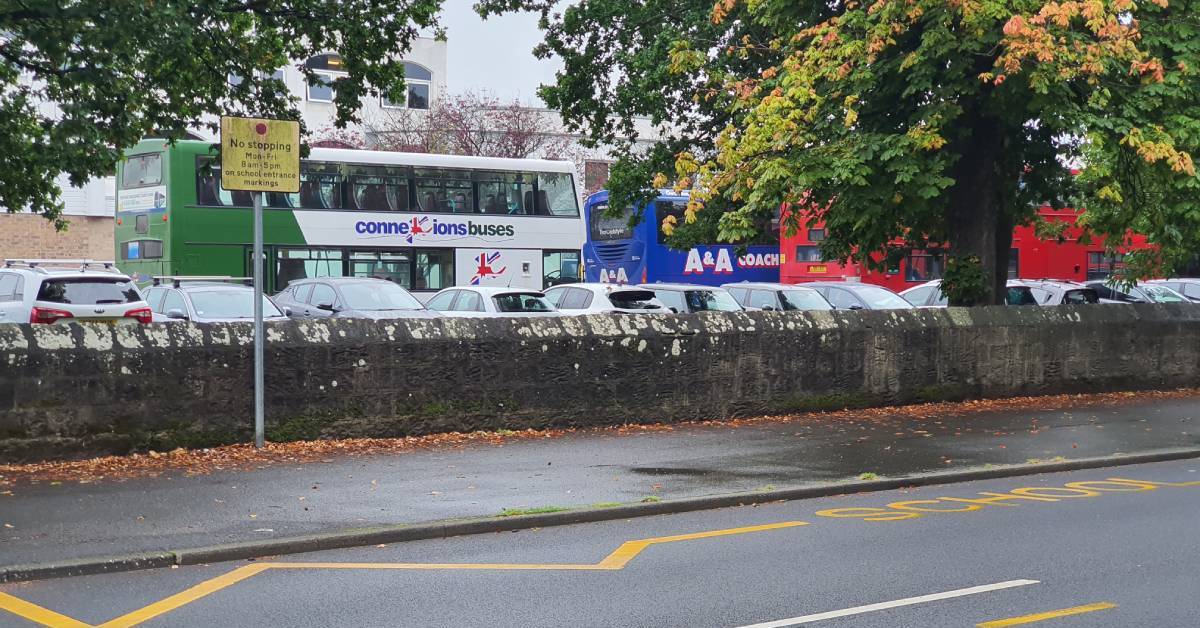 Yesterday, the Stray Ferret published an investigation that found that children in Harrogate are being taken to school in diesel buses that are amongst the dirtiest and most polluting vehicles on our roads.

We discovered through a freedom of information request that 50% of these buses are over a decade old and almost 20% of these go back at least 20 years.

University of Leeds climate scientist and Harrogate resident Professor Piers Forster told the Stray Ferret that the old school buses will be having a damaging impact on children’s lungs in Harrogate.

He called on North Yorkshire County Council to electrify the school bus fleet.

Michael Leah, assistant director for transport and the environment at NYCC, said the council is working with Transdev to bid for government funding for electric buses.

However, it is not clear how many of these buses would be used on school routes should the bid be successful.

“Bus companies are bound by regulatory compliance and as a home to school transport authority we are required to seek best value for money in securing transport provision.

“We have also set an aspiration of achieving carbon neutrality by 2030 or as near to that date as possible; accordingly we work closely with our bus operators moving towards a more modern fleet.

“Indeed we are working with The Harrogate Bus Company, part of Transdev, on a scheme that – if the funding bid succeeds – would see 39 zero-emission buses delivered in Harrogate over the next three years.”

The Stray Ferret contacted the four main school bus providers in Harrogate to ask what they are doing to clean up their fleet.

Craig Temple, managing director of Connexionsbuses said because it is a family-owned business, any upgrades have to be “cost-effective”. He said none of their buses are 20 years old.

“When providing commercial school services, as ours are in Harrogate, our main priority is to provide a value for money, safe and reliable service.

“Each bus carries 70-80 pupils, and as such takes that number of cars off the road. The pollution from this number of cars would massively increase the impact on everyone’s health, and cause congestion (which further damages peoples health).

“I think most people fail to realise what the effect would be on parents through ticket prices if we were to buy much newer vehicles (or even new) at a cost of nearly £400,000 each.

“To purchase vehicles less than 10 years old would add massive costs on to the daily tickets of the children travelling, which, in turn, would no doubt lead to less travelling on the bus and more cars on the road, leading to more congestion and pollution.”

Steve Ottley, general manager of Harrogate Bus Company said some children go to school on electric buses that are part of its main network.

“We are one of 10 operators that run school buses in the district and so this survey is not a representation of our impact as an individual operator. Over 95% of our total fleet is ultra-low or zero emission, running all day and night, compared to school buses which will only run two trips a day.

“As a result of integrating the school bus network into our main network, which improves ticketing and connectivity for customers, the numbers of specific school buses have been reduced, and a third of specific school journeys are now run by electric or ultra-low emission vehicles.

“The remaining five buses are fitted with Greenroad telematics technology to limit fuel usage and idling, and we continue our programme to transform to a fully zero-emission bus operation for Harrogate in the coming years.”

Abbotts of Leeming and York Pullman did not respond.

The Stray Ferret also contacted Harrogate’s four public high schools to ask if they were concerned with our findings and what they were doing to encourage cleaner buses. St Aidan’s and St John Fisher did not respond.

Helen Woodcock, the headteacher at Rossett School, said the school actively promotes cycling and walking to its students.

“Technology has moved on in the last 30 years, from a period where leaded fuel was considered acceptable, to a real focus on the need to use sustainable sources of energy for transport.

“Some of our students use the new public electric bus services to get to school and we actively promote the alternatives of cycling and walking to all parents and students. The school student council have focused on recommending other sustainable changes to school life over the years.

“We have a policy that buses directly controlled by NYCC have to enter the school site and turn off their engines whilst waiting for students.

“We look forward to changes in government policy impacting on legal limits for emissions as they move towards fulfilling the promises made in 2019, in the amendments to the Climate Change Act.”

NYCC provides 11 bus routes to HGS and several are shared with Rossett pupils.

“We no longer use external coach providers for the Leeds and Tadcaster routes, we operate these services in-house with our own Ultra Low Emission Zone compliant minibuses. Our minibuses are leased brand new and receive regular services and vehicle checks to ensure high standards are kept.

“The two remaining routes however, Pateley Bridge and Boroughbridge, are too over-populated for minibuses and so we work closely with our coach providers in ensuring the high standards of these vehicles provided. We source the most local firms with capacity to fulfil the route requirements which ensures that emissions are reduced.

“NYCC also manage school routes which combine at least 3 routes with Harrogate Grammar School and Rossett High School which we are happy to support to reduce further vehicles on the road.”