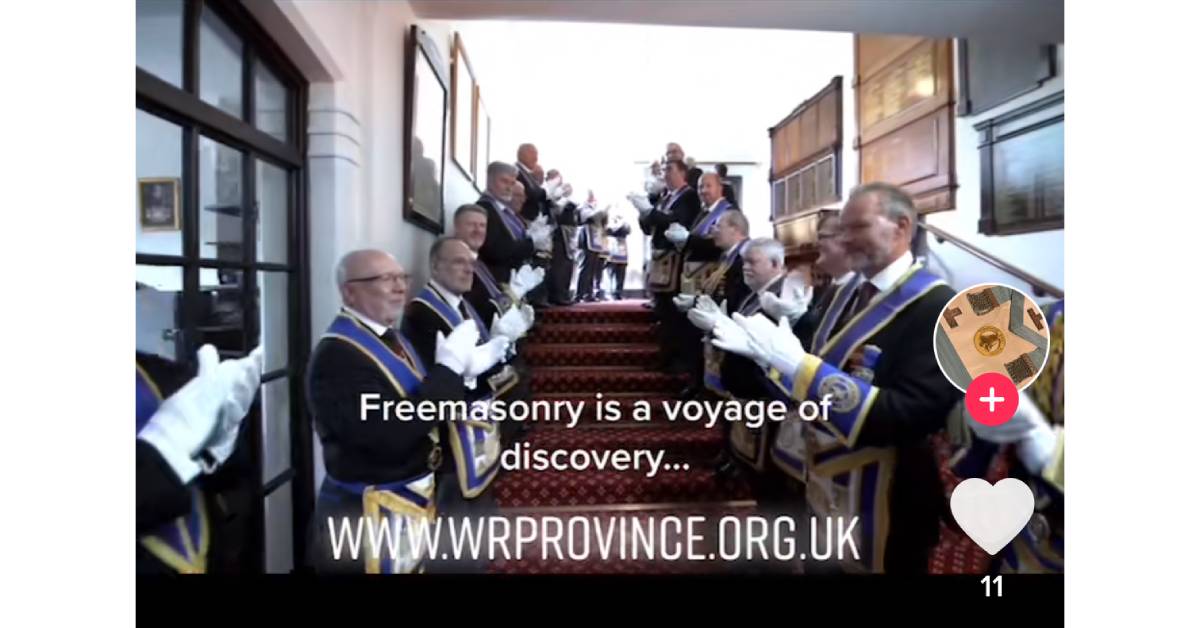 The first TikTok post is a take on the Titanic staircase scene.

It is an ancient organisation shrouded in mystery, which conjures up images of aprons, arcane symbols and secret handshakes.

However, in an effort to bring the fraternity into the modern era and attract younger members, Freemasons in Yorkshire are attempting to become TikTok famous.

The Province of Yorkshire West Riding has posted two videos on its new account – @wrfreemasons – including a take on the staircase scene from Titanic, set to Celine Dion’s My Heart Will Go On.

If you would like to know more about Freemasonry in Yorkshire, West Riding, visit http://wrprovince.org.uk #freemasons #brotherhood #fraternity

♬ My Heart Will Go On (Love Theme from “Titanic”) – Céline Dion

The second is a TikTok of the famous Masonic aprons, described as “a badge of honour” being packed into a suitcase, with the caption ‘Freemasons wear aprons’. This is set to the track Run, by Becky Hill and Galantis.

Both have been filmed by member of Harrogate’s Harlow Lodge David Simister.

“Obviously we are a secret society, but we are hoping to open it up to a new, younger audience on TikTok.”

Harrogate’s Royal Hall to feature in next video

A third TikTok video which will be a take on the Kingsman movies – complete with bowler hats – is set to be filmed outside Harrogate’s Royal Hall on Saturday.

It follows the launch of a video on the The Province of Yorkshire West Riding’s website last month, which throws light on what Freemasonry is all about.

The film features a number of Freemasons, including a university undergraduate, retired firefighter, former soldier and a financial consultant, explaining what enticed them to join.

It also shows the splendour of a Masonic ceremony, the charitable side of the organisation and, more importantly, the diversity of its members from so many different walks of life and social backgrounds.

Based on the old West Riding of Yorkshire, the Province has more than 5,000 members and over 180 individual Lodges, and covers an area from Sheffield in the south, to Ripon in the north, Goole in the east and across to High Bentham in the west.

There are five individual lodges in Harrogate, with around 400 members who meet at the Masonic Hall on Station Avenue.

James Newman, who will become the Province’s most senior member at a ceremony held in Harrogate next month, said:

“Freemasonry in Yorkshire dates back well over 200 hundred years and, in a nutshell, it is about making good men better.

“Our members range in age from those in their late teens and early twenties to those who are in their nineties and older and they hail from many different professions, ethnic backgrounds and religions.’’

Mr Newman said charity was at the heart of Freemasonry, with the Province of Yorkshire giving more than £200,000 to a variety of local causes each year, including schools, hospices, youth organisations and community groups.