0 Items
Harrogate vegans on Veganuary, restaurants and why they chose plant-based diets
by 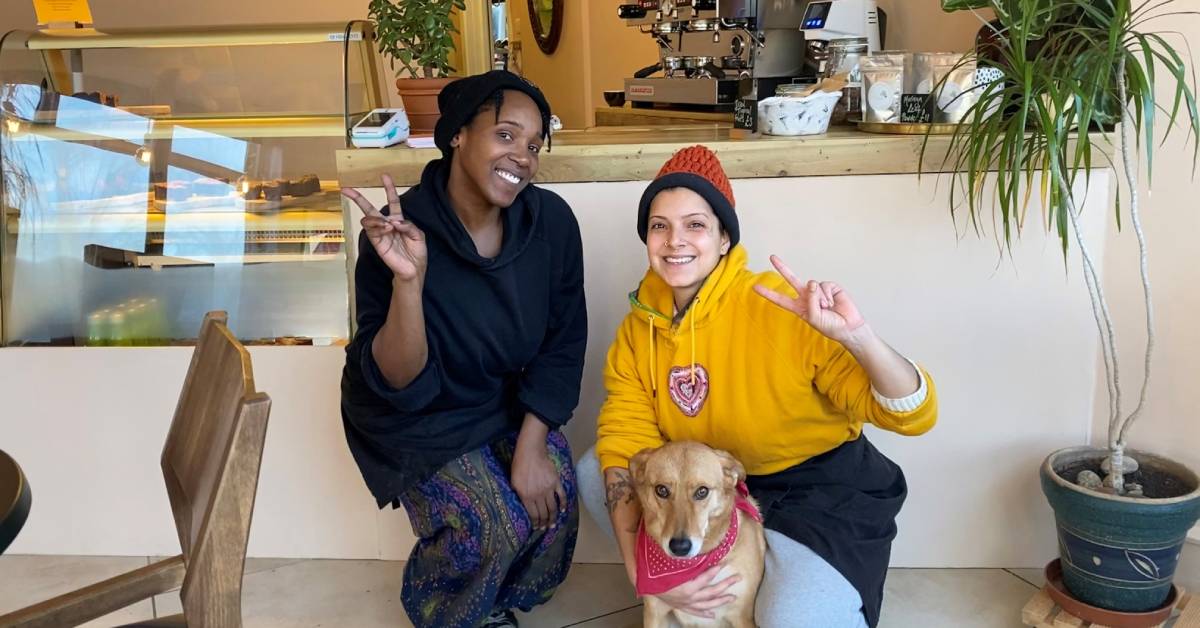 Whether you are a fan or not, veganism is definitely having its moment.

A record number of people are expected to try to eat only plant-based foods this month as growing concern about the climate crisis heightens interest in the Veganuary movement.

More than half a million people signed up to take part in last year’s Veganuary, about a quarter of whom – 125,000 – were based in the UK. However, the campaign’s research suggests that potentially 10 times as many people participate and a significant number continue with plant-based diets beyond the end of the month.

Vegan options are certainly appearing on more and more menus across the district – with some offering a wide range of options and even separate menus.

However, there is currently only one dedicated vegan café in Harrogate – Nourish Plant Kitchen – and the launch of the town’s first vegan restaurant, Vertigo, has been delayed.

Nourish, on Mayfield Grove, opened in August after owner, Hannah Postlethwaite, took over what was formerly the Option Ve cafe.

Aimed at meeting the demands of the town’s growing vegan population, the café serves homemade food, juices, smoothies and raw cakes that are exclusively vegan, as well as refined-sugar free. 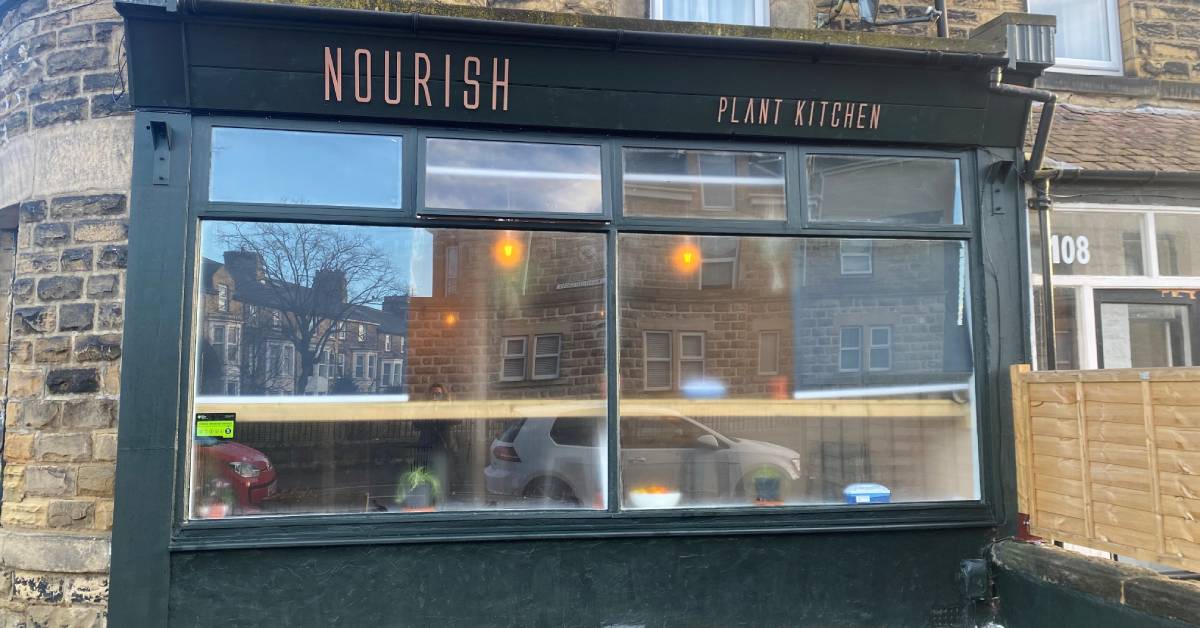 Rebz Jack, a baker at the dog-friendly café, has been a vegan for more than five years, a decision she initially made after questioning why, as an animal lover, she was eating animals.

“At first it was animals. Then it was the health benefits of not eating meat and dairy. It ended up making sense and over the course of two weeks I just dropped it.

“The owner Hannah, who has been a vegan for three or four years, was a vegetarian for a while and then something just clicked.

“I have mostly felt the benefits from a health perspective. When you first go plant-based you can tell by how much weight drops off you. Movement is easier and my knees weren’t as seized up.”

Rebz said it was easier than ever to be a vegan now, as there were so many food and drink options available, with even McDonald’s offering a plant-based burger, the McPlant, which she has tried – and enjoyed!

However, she prefers to cook and eat fresh food, rather than use alternatives, like soy for example, and this is very much the ethos of Nourish. 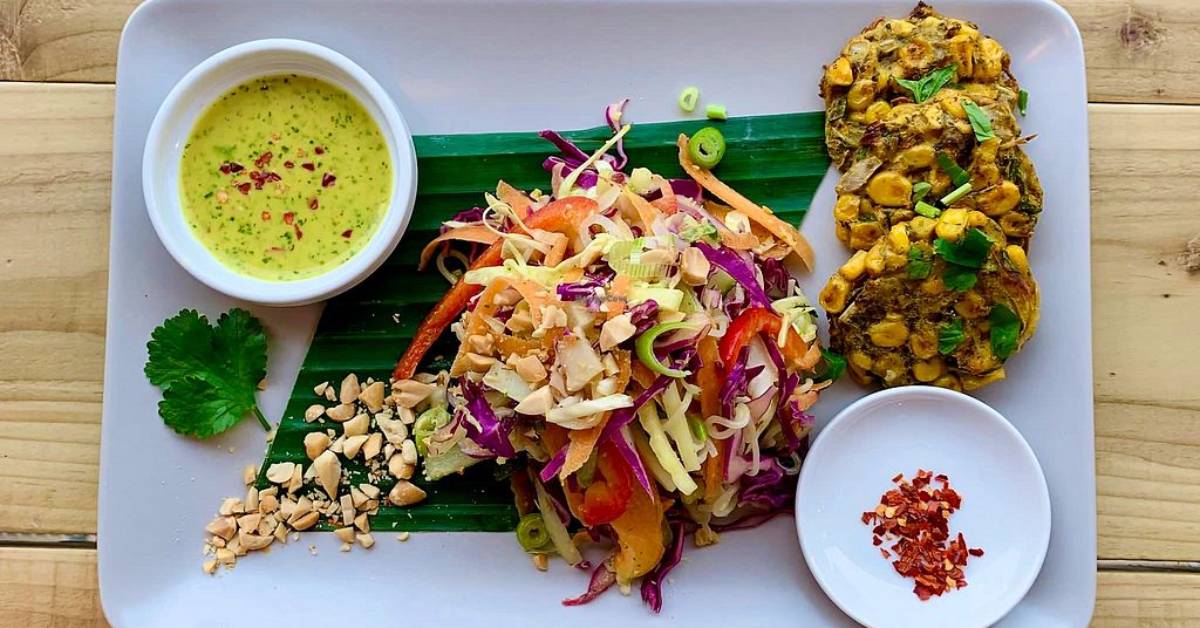 The chef, whose favourite dish on the menu is mushrooms, thyme cashew cream and truffle oil on toast, said:

“We make sure we offer a nice tasty vegan menu and make everything fresh ourselves. It’s all homemade and healthy and it’s all food that will benefit you.

“You don’t have to be vegan to enjoy it. I think it’s good to see it as nice food rather than just vegan food. There is no pressure to be vegan, if you want to get on board great, if not, then that’s alright too.”

And when it comes Veganuary, she’s a fan of anything that might encourage people to give veganism a go.

“There will always be some that just do it for the hype, but it’s a great thing for awareness more than anything.”

The year of the vegan

Sarah Dickinson is a blogger from Harrogate, known as Sunshine Sarah, and regularly writes about veganism.

“I have been vegan for three years now and I basically used Veganuary, not once, but twice, to make the switch. 2019 was in my opinion the year of the vegan, it all started with the Greggs sausage roll and hasn’t stopped since.

“A lot of companies, brands, supermarkets and restaurants who brought something out for Veganuary 2019 have continued to expand their range and even make some of their bestsellers permanent because of the rise of consumer interest in these more plant-based options. Even people who have no interest in going vegan are eating or trying these new options, such is their popularity.

“Each January now it seems there’s a war between who can offer the best options to cash in on the vegan market. In my opinion this is great because it means there’s even more choice available, whereas previously options were limited everywhere you went.” 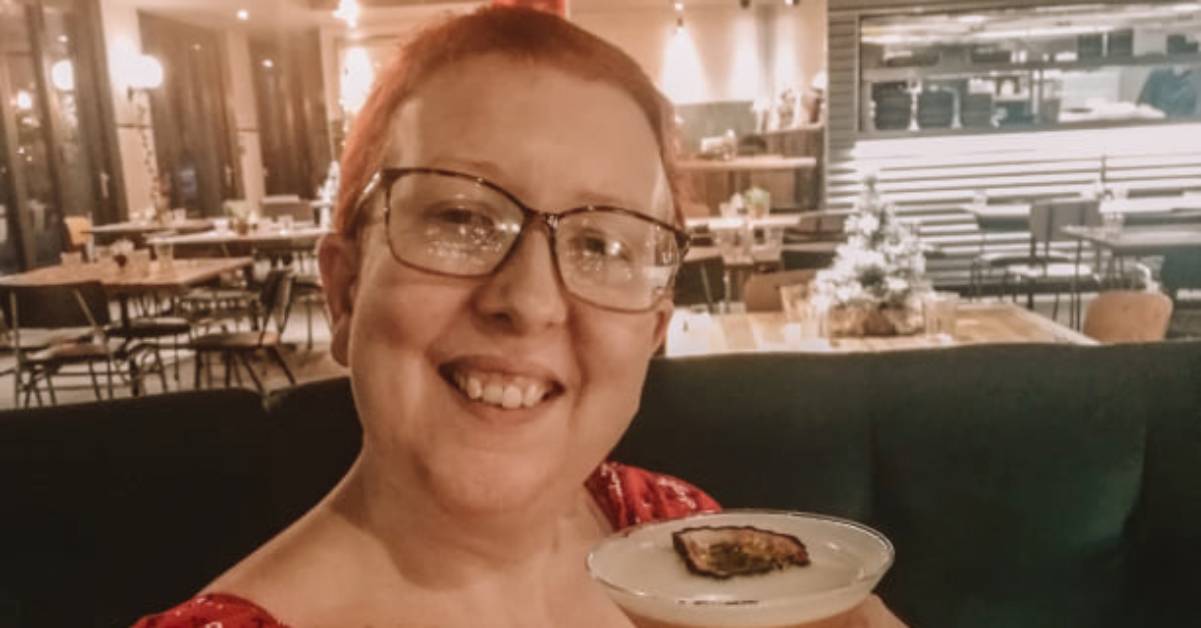 Sarah said vegan options in Harrogate were getting better, however there was always room for improvement.

She listed Hustle & Co, Farmhouse and Nourish as her favourites for offering “tasty plant-based vegan, vegetarian and gluten-free options”.

“There are always new options on their menus and the food is so tasty.

“Pizza Express also have good offerings, but is severely lacking in the dessert department. I would say it’s getting better in Harrogate but it could be amazing given the sheer number of restaurants and places to eat here.”

“I’ve been meat-free since I was four-years-old and vegan for about four years.

“I think Veganuary is a fantastic campaign and it’s a great way to ease people into a plant-based diet, or to show them that vegan food is delicious. 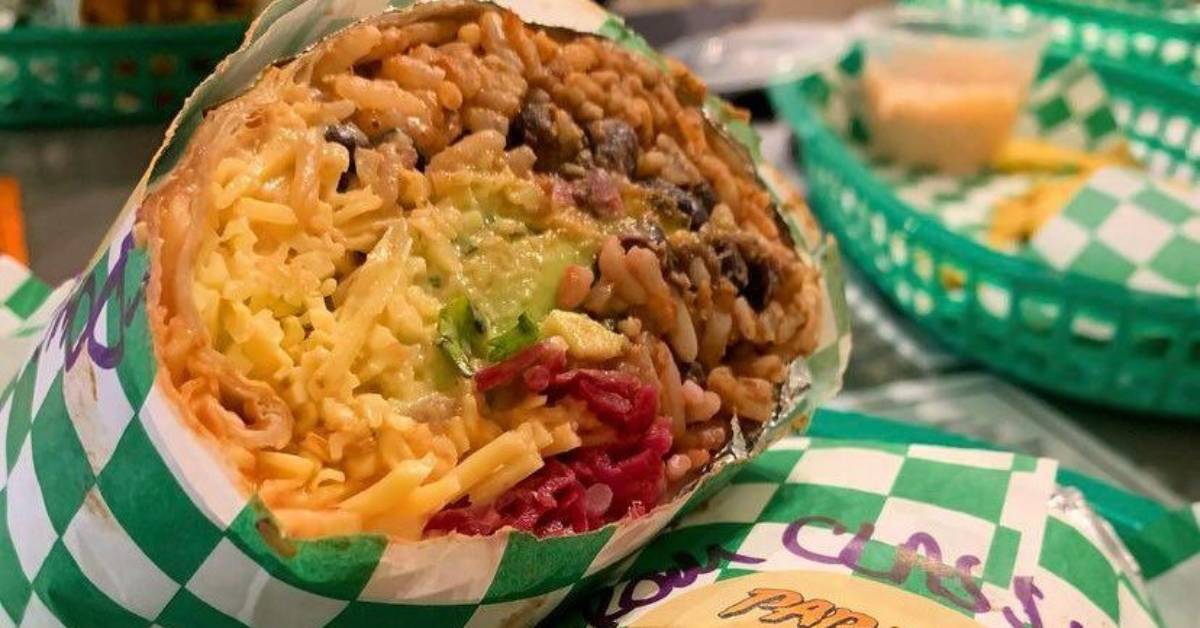 Jo Hewson, from Harrogate, said Veganuary gives a push to restaurants, supermarkets and food and drink establishments to think creatively about vegan options, leading to more permanent options for vegans as a result.

“I look forward to it so much, because I know there will be new options for me to try each year.

“I love Nourish Plant Kitchen as our resident vegan cafe, Hustle & Co have some delicious options, Farmhouse is great for variety. Recently I’ve been to Cote Brasserie and they have really shaken up their menu and have some of the best vegan food I’ve ever had.

“When I first became vegan, my options for eating out were limited to chain restaurants like Zizzi or Pizza Express – with one really dull vegan item on the menu.

“But now I am so happy that independent restaurants and cafes are not only catering for us, but being really inventive, trying to offer more than one option, and coming up with really unique and interesting food.” 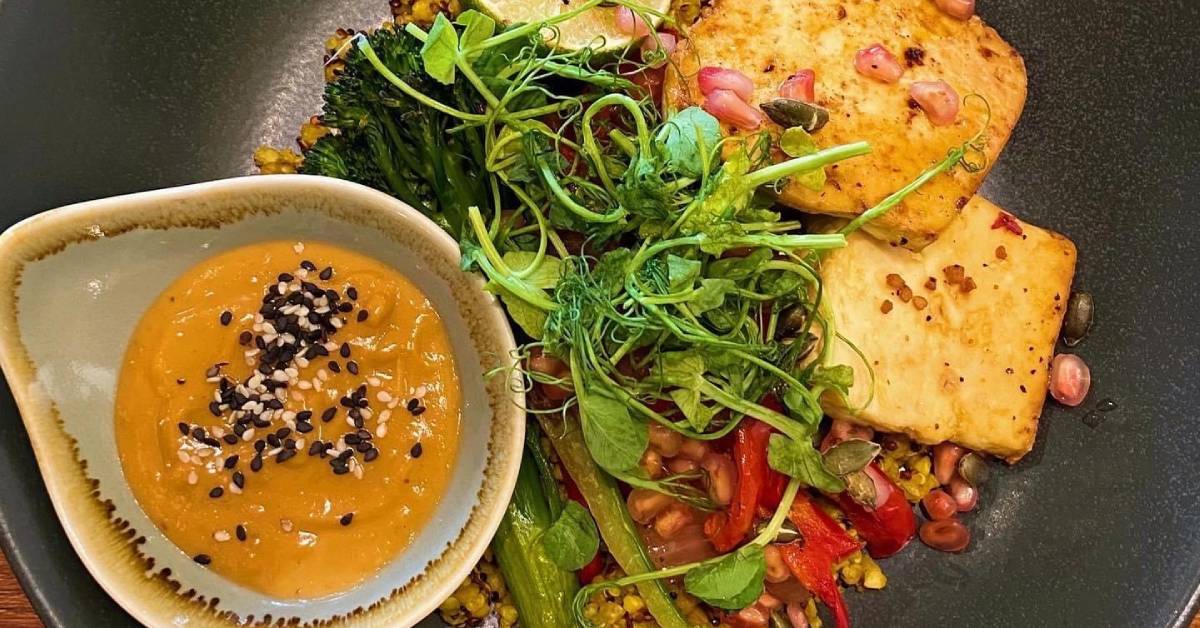 Jasmine Feingold, also from Harrogate, said she believed the town had some great vegan options, listing Farmhouse and Hustle & Co as her go-to places as she could also take her non-vegan friends.

“Also, it’s just so nice to be able to support local businesses that offer vegan such as Major Tom’s Social, which does such great vegan pizza, great coffee and of course great beer.”

Rachel Knight, who grew up in Knaresborough but now lives in Harrogate, has been a vegan for four years and said the restaurants’ vegan options had massively improved in that time – particularly in the last two years.

“If I go out for tea in Knaresborough, I go to the Two Brothers Grill and Pizzeria or So! Bar. Two Brothers change everything to suit you and are really helpful about it.

“There aren’t really any places that are exclusively vegan, but most are happy to adapt recipes. It would be good if there were more places that offered a vegan-specific menu, rather than there being just one vegetarian option you can change to vegan.

“I think Veganuary is good as it gives people the opportunity to try it, without committing to going fully vegan. I was only going to try it for a month – I did it in February, rather than January – but I carried on.

“I have felt much better health-wise. If you eat a big vegan meal compared to a meat one you feel much less sluggish. I would definitely recommend it.”

A proposal to set up a group for women dealing with symptoms of the menopause has received an "overwhelming" response from the community https://buff.ly/3FQ8GCM