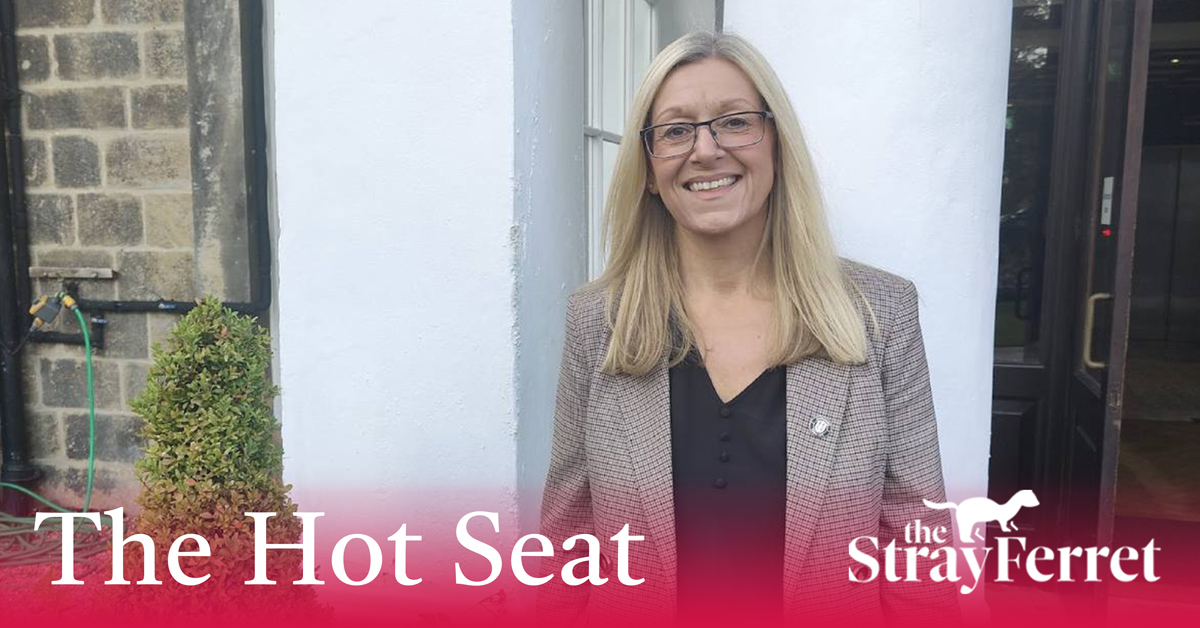 Sarah Barry is Harrogate through and through.

She grew up in the town, attended Granby High School and worked for Stray FM from almost the start of its existence in 1994 until its closure last year.

In her first media interview since becoming the club’s new chief executive officer three weeks ago, she told the Stray Ferret there are some surprising similarities between running a local radio station and a football club.

“When I was running Stray FM, our unique selling point was ‘local’. Our stakeholders were our community, listeners, advertisers, regulators and owners. It’s exactly the same with the football industry.”

The jump to league football

On the pitch, Simon Weaver and his players have brought Harrogate Town into the English Football League for the first time in their existence and have captured the imagination of the footballing world for their team spirit and style of play.

However, in some respects it’s been a difficult summer off the field.

Multiple safety issues at the ground forced the council to ban fans from attending a friendly, their online ticket booking system went down on the day of a match and there has been a public row between two rival fan groups.

Ms Barry said suggestions that the club was not prepared for the off the field rigours of league football are “grossly unfair”:

“It’s easy to say that on the outside looking in but I’ve been with the club three weeks and I’ve picked it up really quickly. I’m really protective of my team now. We’ve made some errors but we had to prioritise and make sure the team was ready to play football. It’s like having 20 tennis balls thrown at you, you can only catch so many of those.”

Key to Ms Barry’s role will be growing the fanbase and attracting more fans to the EnviroVent Stadium. It’s often said that Harrogate is not a “football town” but she believes there is potential to double their regular attendance to 6,000 people.

“We’re not [a football town]. That’s a fact. But we have the Harrogate district. Nearly 150,000 people live here and we can can reach out to them.

“We have got football fanatics, the schools and community who we really want to work strongly with.

“Leeds United have done a lot of work around here, but most people have two teams. They’ll have a bigger team and they’ll have a local team. Not everyone can afford to go off to Manchester United or Liverpool.”

The stadium is in a residential area and flanked by the busy Wetherby Road. The ground has been transformed after some serious investment from the club but it’s hard to ignore some well-documented issues.

It’s difficult to park, they’ve had to close the 1919 bar on match days, and fans spill out onto the road at the end of games. So will the ground be able to cope with 6,000 fans?

Ms Barry said “there are no immediate short-term plans” to move the ground but conceded it has challenges which she believes they can overcome.

“There has been a lot of work in years gone by to potentially move the ground. There are so many challenges [at the EnviroVent], we won’t hide from that.

“A decision was taken and there’s been a lot of investment. If we can make it happen to stay where we are that will be the first choice at the moment.

I’ve been to a stadium recently and the capacity was 20,000 but they had 5,500 fans in that. It looked empty, what would you rather have? A jam packed ground full of energy and atmosphere bouncing off every corner, like we had at Newport. I thought the atmosphere was electric. That’s what we’re after week-in week-out. I’d rather have that than a ground thats three quarters empty.”

As part of the restructuring at Harrogate Town, Garry Plant will move from managing director to commercial director with Ms Barry overseeing the whole operation.

Mr Plant has been the public face of the business side of the club and has been the scapegoat for some issues fans have had with the club, particularly around communication.

“I’ve known Garry since he started at the club. He’s a great guy and has done so much that is unseen. He’s come in for some stick. I’ll defend him. 90% of the stuff he does is unseen. You see what happens on the football field, but what goes on behind that and the hard work, nobody sees that. I’m here to support him and he’s doing a great job.”

Ms Barry also stressed the importance of the club’s supporter liaison officer (SLO) Phill Holdsworth, who like Mr Plant, has faced criticism from a section of the fanbase. She wants to improve communication between the club and fans.

“I’m new to this and don’t know whether [the criticism of the SLO] is warranted or not. Some of it is not defensible in any way shape or form. I want to help him as well improve those relationships. It’s fundamental to have an SLO. It will really help us as a club. We need to nip some of these things in the bud and understand if there’s any upset or hostility and try and prevent it. Everyone is in this for the same reason.”

Ms Barry said her role at the club came about through the friendship she forged with Simon during her time at Stray FM.

It’s clear the reverence she has for both him and his dad, the club chairman and owner Irving Weaver.

I almost daren’t broach the subject of what would happen if a club higher up the leagues approached them about Simon Weaver becoming their new manager. She said: “You’d have to ask Simon that question. I’d obviously like him to stay!”

She wants to help the club achieve further success and reward the Irving family for what they’ve put into the club over the past decade.

“Simon is amazing and inspirational full stop. He’s probably the reason I’m sat here. Listening to him speak, he’s eloquent and has this sincerity that is genuine. He’s got respect and there’s no spin.

“I want to see all the effort money, and time come to fruition over the past years for the owner.”