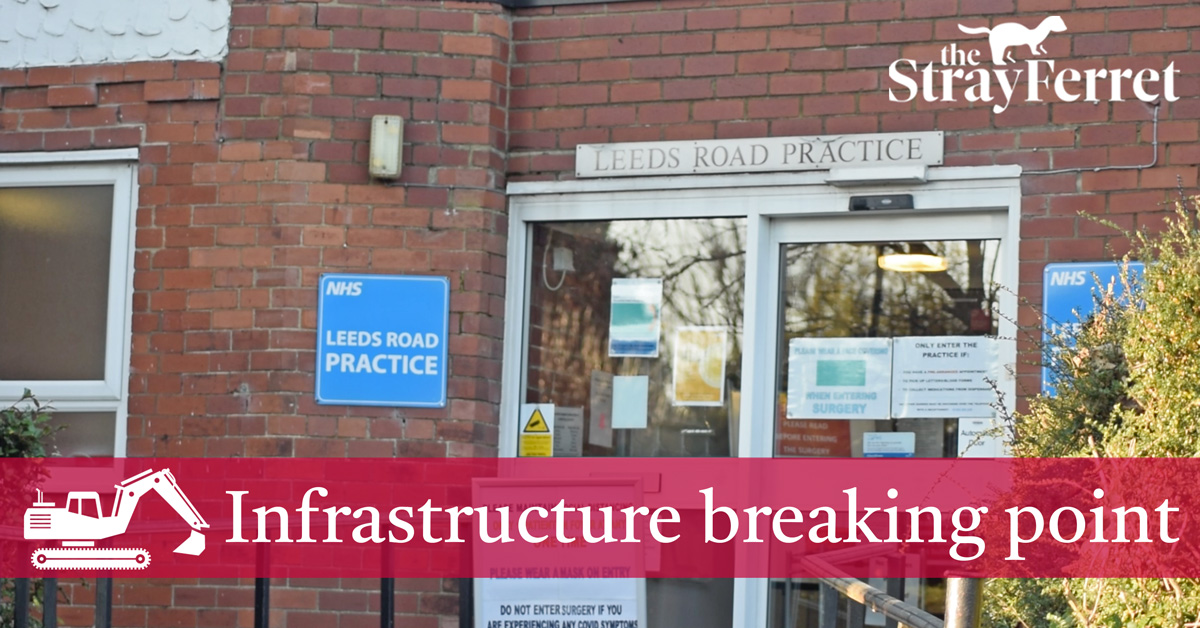 The Local Government Association says it “can’t be emphasised strongly enough” that quality infrastructure must be the starting point of any good Local Plan.

But Harrogate didn’t have a Local Plan for six years. Thousands of homes were built, yet there was no strategic plan for vital services such as schools and healthcare.

Mike Newall lives in a cottage on Whinney Lane – until recently, a quiet rural street on the west side of Harrogate.

The Pannal Ash area is now though surrounded by new development and faces the prospect of thousands of new homes over the next few years – changing the face of where he lives forever.

He is clear that both Harrogate Borough Council and North Yorkshire County Council have so far failed to ensure that residents will be able to access vital services when the housing is eventually built and asks:

“Where is the social infrastructure?

“Apart from a new primary school on Whinney Lane, where are the thousands of new residents going to get GP and dentist visits? Local surgeries and dentists are full. A normal appointment at Mowbray Square medical centre takes two to three weeks.

“It goes to show that prior to HBC having a local plan, the council were hobbled and exposed.”

Harrogate Grammar School, St Aidan’s and St John Fisher are some of the highest-rated comprehensive secondary schools in the north of England.

The growing number of homes in the area has made the scramble for school places even more competitive, with high value placed on homes within the catchment area.

A freedom of information request submitted by the Stray Ferret to North Yorkshire County Council reveals that every secondary school in the district is heavily oversubscribed, and the situation deteriorated from 2018-2020. 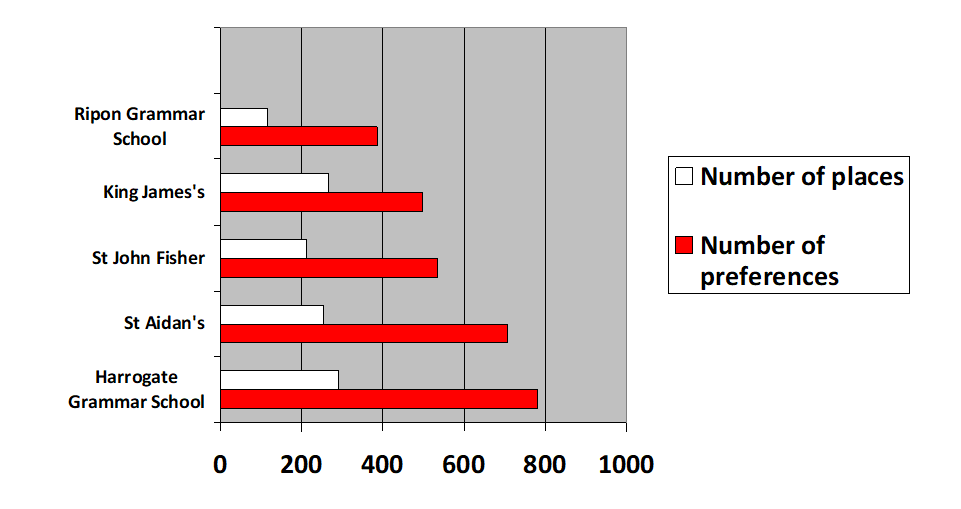 Similarly, primary school places are at a premium. The data reveals 55 of the district’s 71 primary schools were oversubscribed for 2020.

New primary schools have been included in plans at Whinney Lane in Pannal Ash and Manse Farm in Knaresborough, but in many cases where there are large housing developments planned, no new schools are proposed and the local primary schools are oversubscribed.

There are developments underway in the Kingsley Road and Granby triangle, as well as the Bellway and Persona developments on Skipton Road, with hundreds of homes between them.

There are several primary schools in the area that could educate children from the new developments- all are oversubscribed, including: 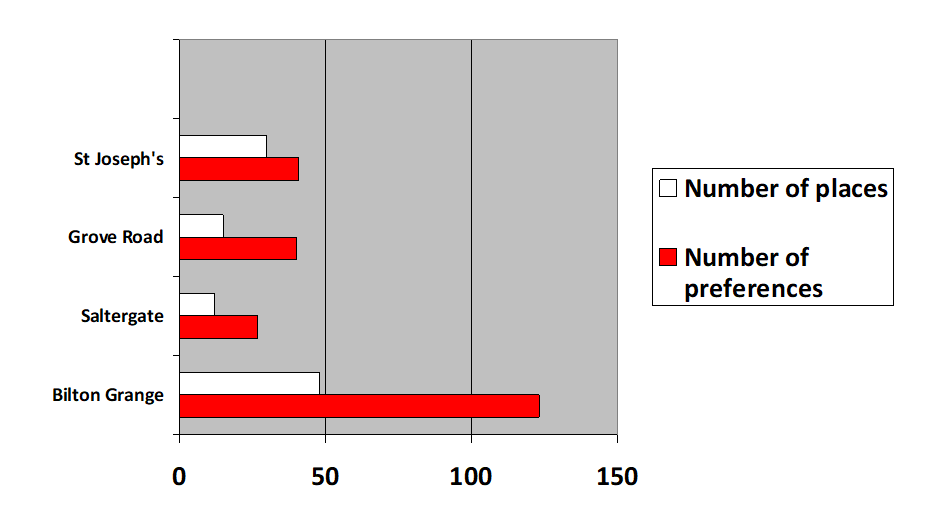 While a scramble for school places could affect Harrogate’s youngest residents’ start in life, a rapidly ageing population means there will also be a greater demand on the district’s health services.

From the beginning of the Local Plan period in 2014, HBC forecasts a 54% increase in the local population of people aged over 65 by 2035 –that’s 18,720 more people– which will put GP practices in the district under increased pressure. 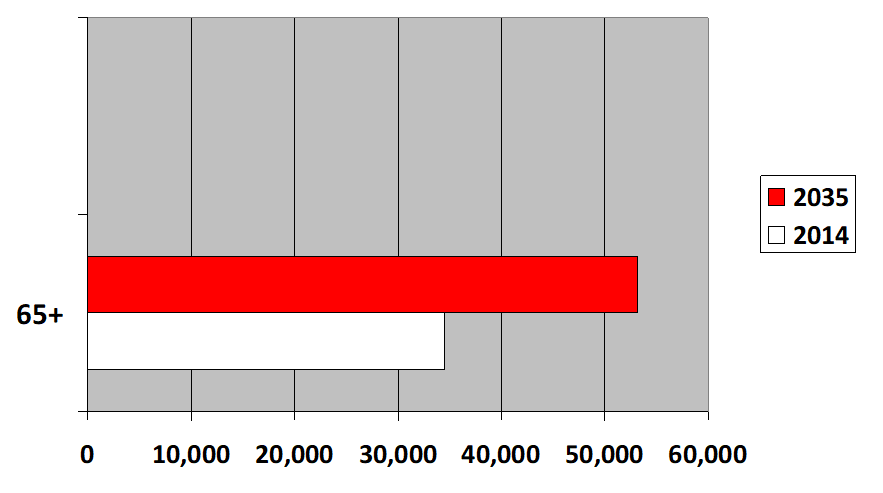 But other than Homes England’s 1,300-home development at Ripon Barracks, none of the major developments with planning permission in the district proposes to build new healthcare facilities to accommodate them.

There are currently 17 GP surgeries in Harrogate, Ripon, Knaresborough and the district’s villages.

But a 2020 NHS survey of GP practices found that the district’s practices did not score well for patients wanting to get a prompt appointment with their GP.

Read more of our housing investigation:

Just 44% of patients at Beech House surgery in Harrogate said they were able to speak to their GP when they wanted to. At Leeds Road surgery, that number fell to 39%.

A spokesperson for NHS North Yorkshire Clinical Commissioning Group (CCG), in charge of healthcare provision for the district, said:

“North Yorkshire CCG is actively involved in discussions with the planning department at Harrogate [Borough] Council on all the large scale housing developments in the district so that the impact on local health services is taken into account and any appropriate funding is secured that can be used to provide additional clinical capacity within primary care.”

Following a recommendation from the government’s planning inspector, Harrogate Borough Council is currently developing a “Parameters Plan” for the Western side of Harrogate, where 4,000 more homes are mooted.

The intention is to consider sites as a whole in terms of infrastructure, public transport and sustainability, rather than a piece meal approach. But it’s been delayed which has left local residents group HAPARA very concerned.

One reason why so little appears to be done to improve infrastructure is developers have been able to get away without making enough financial contributions – thanks, in part to a lack of a Local Plan, which has weakened the council’s hand with developers.

With no Local Plan, it meant HBC had no roadmap for how the new housing would impact on infrastructure in the district. It meant developers were able to fall back on national planning policy which says a development “should not be subject to such a scale of obligations and policy burdens that their ability to be developed viably is threatened”.

As a normal condition of planning permission, the council asks developers to sign what is called a section 106 agreement to help pay for infrastructure that residents will use.

For schools, the money could pay for bigger classrooms or more equipment.

But the Stray Ferret has learned through a freedom of information request that since 2014, Harrogate Borough Council has collected just £2.6m in payments from developers to help pay for schools, roads, health or public transport to cover the whole district.

Dr Quinton Bradley, senior lecturer in planning and housing at Leeds Beckett University, said developers in Harrogate have been able to use these viability assessments to argue their way out of paying.

Whereas if HBC had a Local Plan with a clear focus on infrastructure, it would have been more difficult for developers to do this.

“It’s money that should have come from developers and landowners, but the public taxpayer has to compensate because the developers didn’t pay it.”

The situation is so serious that the council has requested government introduces a Community Infrastructure Levy (CIL) to supplement Section 106 agreements. This is because the council has identified a £98m shortfall until 2035 to pay for infrastructure, including £42m for schools.

The cumulative effect of having no Local Plan has been significant, and it’s meant schools and healthcare facilities in the district have lost out on additional funds to service a rapidly growing population.