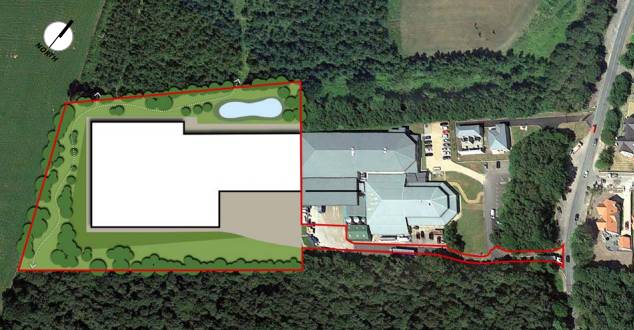 The bottling plant from above. The extension is highlighted in red.

The history of Harrogate Borough Council and Harrogate Spring Water is intertwined — the more money the site makes the more it has to pay to the council.

This is because as well as paying £13,000 a year in ground rent to the council, which owns the land, the company also has to pay a percentage of the site’s annual turnover to the council.

When asked by the Pinewoods Conservation Group charity in a freedom of information request, the council refused to disclose details of this turnover-related revenue, citing “confidentiality obligations” set out when the deal was first drawn up.

When councillors on the planning committee meet next week to decide if they approve the plant’s expansion plans, they will be weighing up the value of potentially more income to taxpayers in the district against what many local residents believe is an environmentally destructive proposal.

Water has been bottled in Harrogate for centuries but in the early 1990s Harrogate Spa Water, as the company was previously known, was selling just 1,000 bottles of water a year.

The company’s fortunes changed in the late 1990s when HBC, run then by the Liberal Democrats, identified an opportunity to explore water resources at the current site on Harlow Moor Road.

It was a hugely controversial decision at the time but the bottling plant was granted planning permission with the land leased to the privately-owned water company with the council taking a percentage of the turnover.

Jane Blayney was a Liberal Democrat councillor for the Duchy Ward at the time and told the Stray Ferret she lost her seat in 2002 due to her then-support of the bottling plant. She said the local Conservative group was strongly against the plant being built, which changed once they gained control of the council in 2003.

By 2019 Harrogate Spring Water had a turnover of £22m selling Harrogate water as far afield as Tokyo and Toronto.

The council report published last week describes Harrogate Spring Water, which was bought out by French multinational Danone in 2020, as a ‘global brand’ and ‘strategic employer’ that makes a significant contribution to the local economy.

Yet there was no specific mention of the turnover-related revenue and how it benefits the council.

Like other councils across the country, Harrogate Borough Council has faced significant financial challenges in recent years due to government cuts and now the coronavirus pandemic.

Covid is set to cost the council £5.9m and the council recently proposed a £5 increase in council tax as well as £1.14 million in spending cuts to help balance the books.

It means that any extra revenue received would be greatly received and could be used to help pay for services.

Pinewoods Conservation Group published a council document from 2016 that praises the company for its positive financial impact on the town:

“The positive impact of Harrogate Spring Water on the marketing of Harrogate as a ‘quality’ spa town is only set to increase as a result of the companies’ expanding international customer base, their targeted growth of water sales within key transport industries (trains, planes, airports etc) and their pursuit of ‘appropriate’ brand sponsorship opportunities’.”

The council downplayed any potential conflict of interest in a statement released to the Stray Ferret: