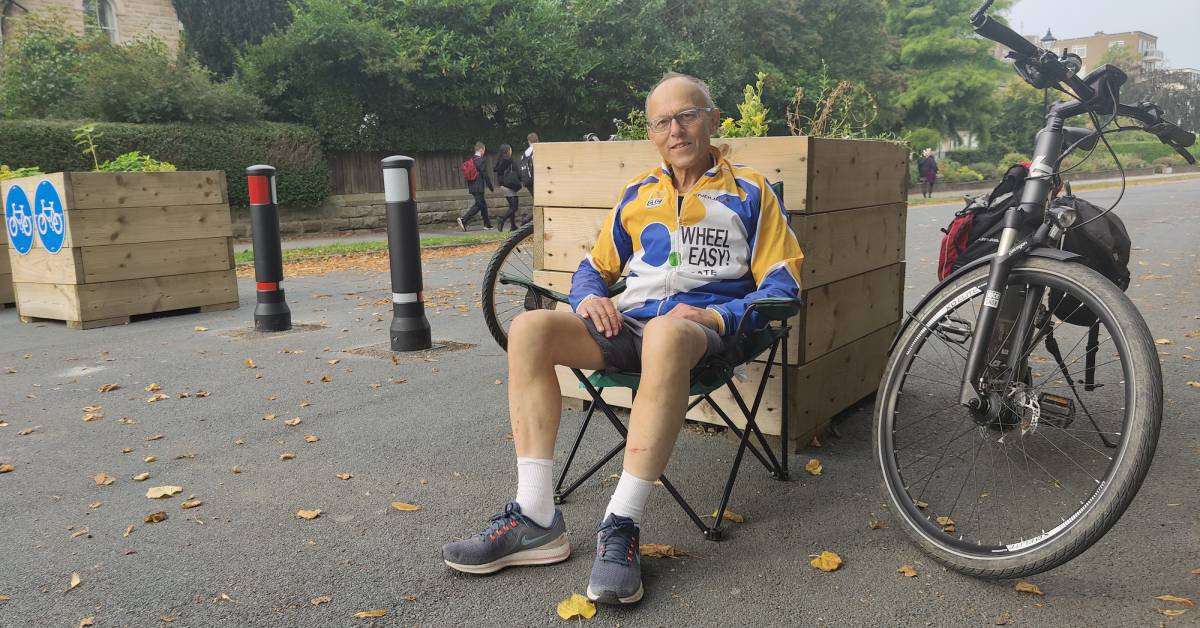 Mr Margolis was spurred into action after reading a Stray Ferret article on Wednesday, which reported that on average around three cyclists per hour over a 24-hour period used the road.

The county council closed Beech Grove to through traffic in February, initially on a six-month trial to encourage walking and cycling. It later extended the trial to 18 months.

The seemingly low number of cyclists using Beech Grove bemused Mr Margolis, who said he used the road several times a week and saw many more cyclists than the council’s survey suggested.

So he put up a camping chair next to the planters and took out his notepad and pen to count them himself.

“The figures didn’t make sense to me. So I woke up this morning and thought, ‘let’s go down and spend an hour there to see how many I can count’.”

The Stray Ferret joined Mr Margolis for an hour in the afternoon to join him counting cyclists. We also counted three cyclists illegally crossing the Stray, and seven motorists performing U-turns in the road after realising they could not pass through.

Mr Margolis accepted that his own survey was not totally scientific because it was performed on a sunny day during peak hours. But he said the reality of the low traffic neighbourhood is that the road has been “transformed” for cyclists and pedestrians.

Several curious onlookers stopped, including a man called David who was on his way to Western Primary School to collect his two children.

“It’s made it so much easier to walk to school with my children.”

“We need to do something to tackle climate change. This is not just a benefit for cyclists, we see far more walkers.”

There were some dissenting voices, however. A couple called Sarah and George, who live together on Cold Bath Road, told Mr Margolis they were not in favour of the scheme, which prompted a passionate debate on the merits of the closure, with other passers-by joining in.

Mr Margolis told the couple that the scheme will help create a cycling culture similar to those in Holland, Germany or Japan.

“It will never happen! We don’t have enough space.”

With the trial set to continue until August 2022, the Low Traffic Neighbourhood will continue to be debated for some time to come.