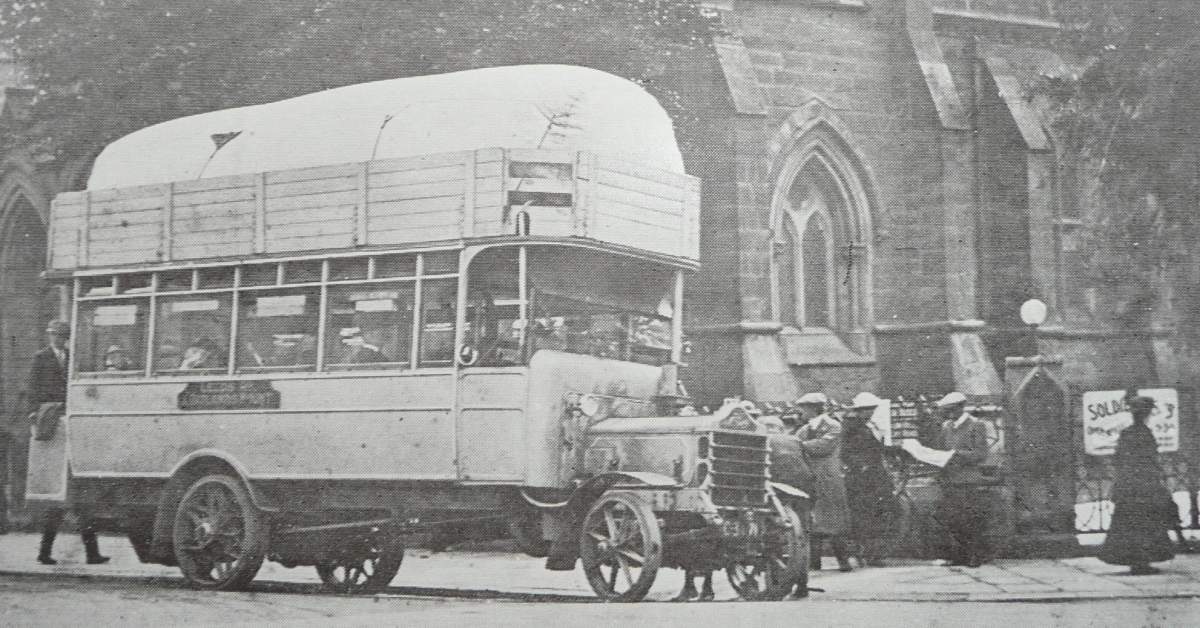 Before the Second World War, Harrogate Corporation ran many of the amenities that were considered essential for the regular life of the municipality, including education, electricity, water and highways, but the provision of transport was left with the private sector. The story of Harrogate’s early bus services has been brilliantly told by Trevor Leach in his meticulously researched book Twopenny Single to Starbeck, published in 2000.

In 1898, local businessman Charles H Burgess came to an agreement with another operator, Ernest Hepper of Crown Hotel Mews, and businessman A E Wynn, who ran the Cairn Hydro, to set up the new Harrogate Carriage Company. After acquiring a second-hand horse bus in June 1898, and four additional horses, the business took off. Double-decker motor buses were reported as being on Harrogate’s streets in 1905 and steam bus services were introduced in 1906 by a Mr A H Marshall of 25 Leeds Road, whose Clarkson “Chelmsford” steam-powered bus began to run on November 29 1906. A full account of these proceedings may be found in Mr Leach’s book.

Harrogate Corporation had, in 1902, toyed with the idea of obtaining powers to enable it to construct an electric tram system of its own, one suggestion being that a central tram station could be built on the garden of the Prospect (now the Yorkshire) Hotel, where the War Memorial now stands. This would have provided stops right around the commercial heart of the town, which would have enabled the Corporation to ban all private vehicular traffic from the centre of Harrogate. There were, however, strong objections to a tram system, which was considered to be noisy and too redolent of Blackpool, so the proposals were dropped, to the advantage of the private bus companies.

By 1914, the Harrogate Road Car Company was running not only local motor buses, but also motor “chars-a-bang” tours around Yorkshire beauty spots, which were popular with visitors. The outbreak of the First World War on August 4 1914 forced changes on the Company, and many of the motor chars-a-bang were impressed by the War Office for conversion to military use.

Fuel supply was a further problem for the Company. The so-called Clarkson Steamer Buses were abandoned in 1916, and in 1917, the Company came to an agreement with the Harrogate Gas Company to supply town gas for four of its McCurd buses. The gas was stored in huge bags that were fastened to the roof with ropes. Re-filling points were provided in Station Parade, at Queen Victoria’s monument, Victoria Avenue, Starbeck and New Park. Gas meters were set into the pavement, and could be connected to the converted buses by means of pipes.

The huge, gas-filled bags must have made the vehicles very unstable, and they could not be driven into their garages when inflated. Mr Leach’s book relates that on more than one occasion it was the driver’s misfortune to see his gas bag blowing across the Stray when high wind broke the securing ropes! The accompanying photograph shows one of Harrogate’s gas buses outside the Victoria Park Methodist Church in Station Parade, which today is the site of the Everyman Cinema.

In writing this piece for the Stray Ferret, Malcolm Neesam would like to acknowledge the original research of Trevor Leach.

Did you know that the Stray Ferret has teamed up with Malcolm to produce audio walking tours of Harrogate? The walks are sponsored by the Harrogate Business Improvement District (BID) and take you back to the Golden Age of the Harrogate Spa and a walk through the Commercial Heart of Harrogate.  Why not take a walk back in time and learn about Harrogate’s glorious past.. They’re easy to do and a great day out. For more information click here.