Harrogate Borough Council bosses have said setting an emergency budget is not considered necessary at this time, despite the authority facing a £15 million shortfall due to coronavirus.

Council officials have outlined a financial recovery plan as part of the authority’s response to loss of income as a result of the pandemic.

It comes as councils across the UK are warning that some may have to issue section 114 notices – an emergency measure in dire financial circumstances – and potentially cut services to deal with the financial gaps.

Meanwhile, Leeds City Council recently warned that it faces £200 million costs amid the pandemic. Leader of the council, Judith Blake, said the authority may have to cut vital services in order to balance its books.

But, the borough council has said that any section 114 notice or mid-term budget is not necessary and it will monitor the situation. 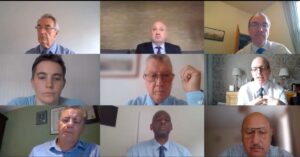 In a report due before a cabinet meeting next week, Wallace Sampson, chief executive of the authority, will say that the council will review its 2020/21 budget and reserves as part of its recovery plan. It says:

“Across local government some councils are having to consider whether to produce a new mid-year budget or to issue a section 114 notice in the event that resources are unlikely to be sufficient to meet expenditure.

“However, at this time it is considered that neither of these actions are necessary, although the situation will be regularly monitored.”

The authority faces a £15 million shortfall due to loss of income on such things as leisure and car parking. A grant of £1.65 million was granted to the council by government to help with cash flow.

In an effort to tackle the deficit, senior officers at the authority have outlined a financial recovery plan which will go before senior councillors.

As part of the plan, council bosses will review the authority’s 2020/21 budget, reserves, investment plans and capital expenditure including borrowing.

Officers are expected to report more on the council’s financial position once the reviews are complete.

Meanwhile, the authority has already frozen all but essential spending and implemented a recruitment freeze on all but critical services.

It comes as both the district council and the county council face a combined deficit of around £57 million due to the pandemic.

A section 114 notice means that a local council cannot set a balanced budget and new expenditure is banned.

Once a notice is served by the council’s chief finance officer, councillors and senior officials have 21 days to come up with a new budget to balance its books.

In 2018, Northamptonshire County Council was forced to serve two section 114 notices as it failed to tackle its spiralling spending which resulted in an estimated £70 million deficit. The council will now be scrapped in April 2021 and replaced with two unitary authorities.