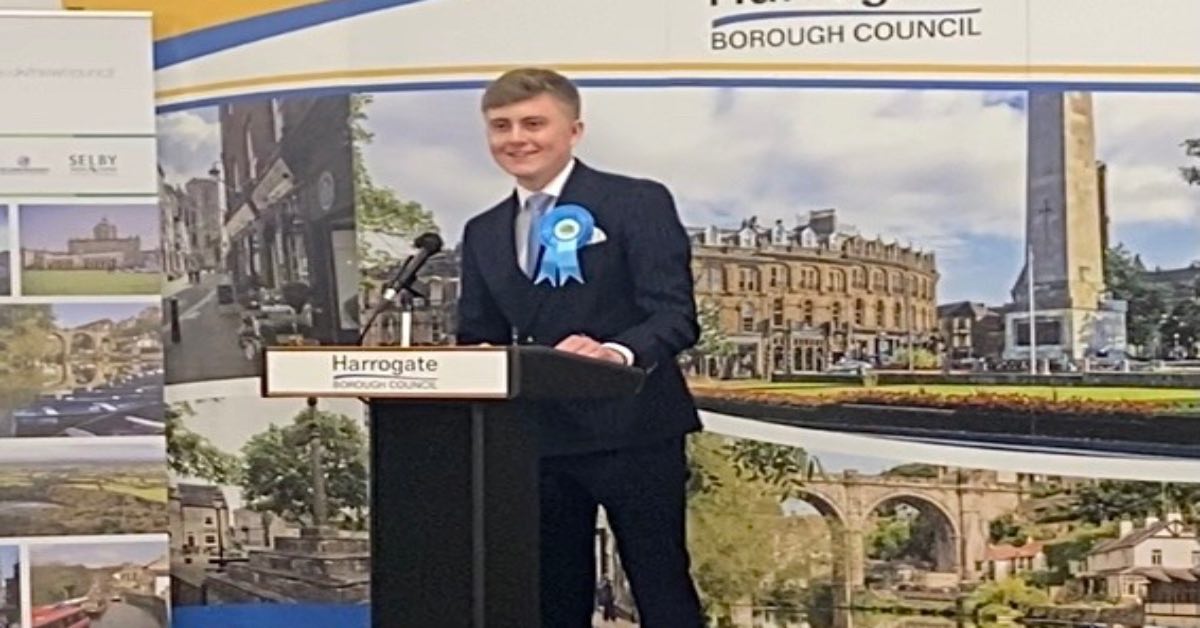 Amid the frenzy of Friday’s election results for the new North Yorkshire Council, a new Harrogate borough councillor was voted in.

Conservative Sam Green was elected to represent the Wathvale ward for the final year of Harrogate Borough Council before the authority is abolished in April 2023.

Speaking after his by-election win, Cllr Green, who is 26-years-old and a former Harrogate Grammar School student, pledged to put young people at the top of his agenda.

“This is my first time standing for election, so I’m of course delighted to have been elected to represent the people of Wathvale.

“I’ll strive unceasingly to try to fulfil the trust and confidence that the people of Wathvale have placed in me and the things in which I believe.

“It is my ambition to encourage greater engagement by younger voters and to try and address the fundamental issues affecting our future generations, including a need for more genuinely affordable homes.”

The by-election was held following the resignation of Conservative councillor Bernard Bateman who held the Wathvale seat since 2016.

Cllr Green, who owns a financial and real estate company in the town, is now the youngest of the borough council’s 39 members.

“I know first hand from my peers that many young people simply cannot afford to remain in the rural villages and locations in which they have grown up in, in many instances due to the cost of housing or lack of suitable supply.

“This is a critical issue not only for these people and their families, but also for the future of the settlements themselves.

“Without fresh blood and ideas, villages and settlements slowly become less and less sustainable, with the resulting loss of services and facilities.

“Moreover, if our young people are then forced to move out of the borough to meet their housing needs in lower value areas, this creates a needless brain drain and will have several knock on effects across the borough.

“The answer is not simple, but this is something I feel very passionately has to be looked at properly and every viable avenue explored to try and address the issue.”

The turnout for the by-election vote was 38%.

Meanwhile, Conservative Nick Brown was voted in to represent the Wathvale and Bishop Monkton division on the new North Yorkshire Council in last Thursday’s local elections.

His victory was one of a few reasons to celebrate for the Tories, which loosened their grip on Harrogate by winning nine seats on the new unitary authority compared to 10 for the Liberal Democrats.

One Green Party candidate and one Independent were also elected in the district.