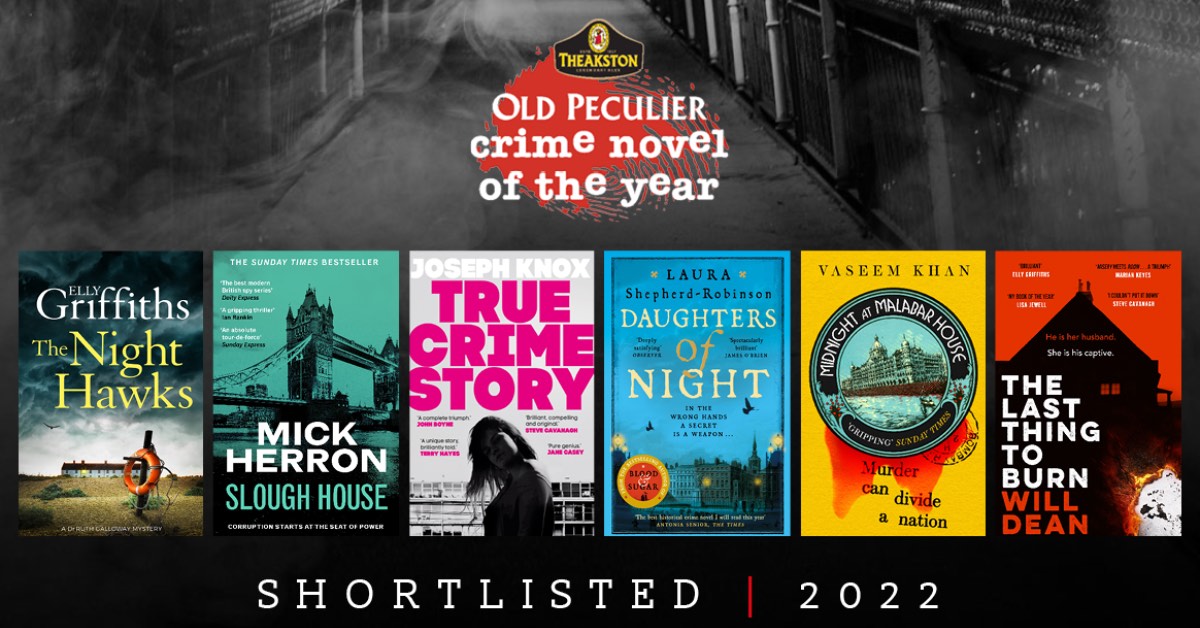 The shortlist for the UK’s most prestigious crime writing award, hosted in Harrogate, has been announced today.

The Theakston Old Peculier Crime Novel of the Year 2022 is hosted by Harrogate International Festivals. As well as the famous award there is a four-day festival welcoming household names to Harrogate.

The award, now in its 18th year, celebrates crime fictions at its best. This year’s shortlisted authors take readers from the streets of newly independent India to a remote Fenlands cottage, from a missing persons investigation in Manchester to a body discovery in Norfolk and from a murder in Georgian London to the murky world of espionage.

The public have until July 8 to vote for their winner with the final result announced on the festival’s opening night on July 21.

The six nominees are:

This is Ms Griffiths’ fourth time on the shortlist. The Night Hawks is the 13th instalment in her Ruth Galloway series. This novel sees forensic archaeologist Ruth Galloway embroiled in a mystery involving Bronze age treasure, a series of murders and a local legend of a ghost dog.

This novel is a Sunday Times bestseller and the first standalone novel from Mr Knox. Blending fact and fiction, the book transports the reader to Manchester and encases them in a web of mystery surrounding a 19-year-old student who leaves a party to never be seen again.

The historical crime writer is back with her second novel, Daughters of Night, two years after her debut Blood & Sugar which was longlisted in 2020. This novel centres on the murder of a prostitute and brings to life the darkest corners of Georgian high society.

In the tenth instalment oh his series, Mr Herron returns with the Slough House which marks the fifth time in five years he has been on the shortlist. The series has recently been adapted by Apple TV as a spy drama called Slow Horses starting Gary Oldman and Kristin Scott Thomas.

The first in a series narrating the investigations of India’s first female police detective finds her tasked with solving the murder of an English diplomat as the country prepares to become the world’s biggest republic.

Will Dean is known for his Tuva Moodyson series but in his newest novel he has changed the setting to the derelict British fenlands. The claustrophobic tale depicts a woman’s determination to escape captivity by an unknown man in a remote cottage. This is Mr Dean’s first appearance on the shortlist.

The crime writing festival is set to take over Harrogate and include multiple events between July 21 to July 24.

“What a fantastic shortlist, six thrilling tales which deliver shocking twists and unforgettable characters! We look forward to revealing the winner in July as we kick off the Theakston Old Peculier Crime Writing Festival.”

“We are delighted to announce this year’s Theakston Old Peculier Crime Novel of the Year shortlist, featuring six novels by some of the most exciting crime writers working today. Whisking readers around the world and through time, this shortlist is a fantastic demonstration of the variety to be found in crime fiction.”

The winner will receive a £3,000 prize, as well as a handmade, engraved beer barrel provided by T&R Theakston Ltd.