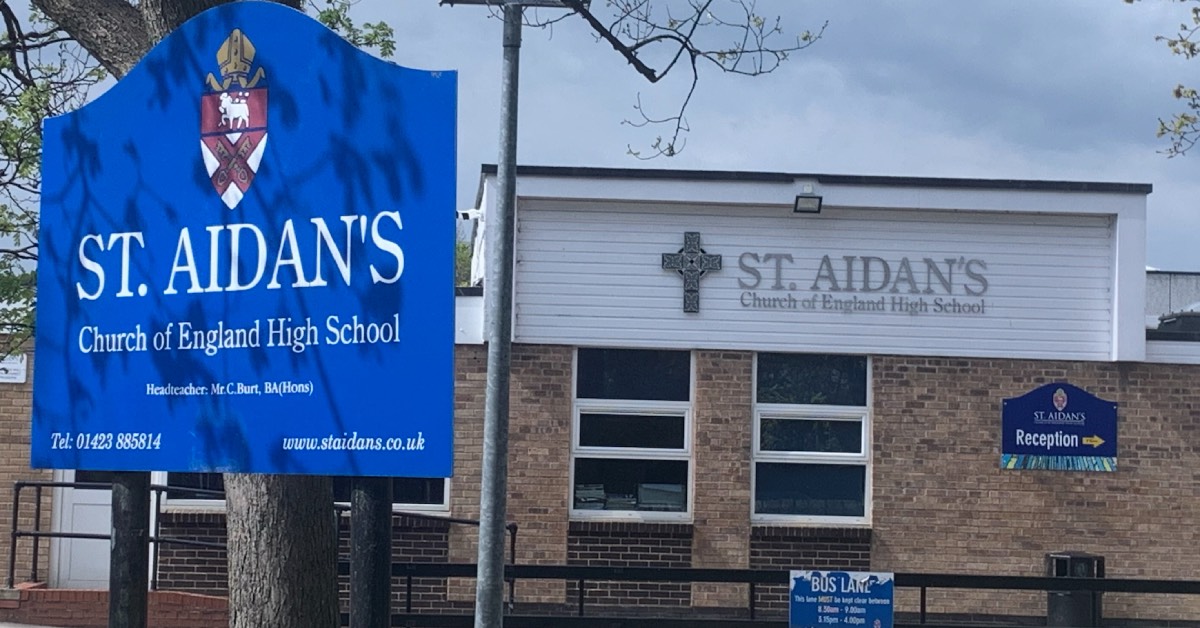 St Aidan’s Church of England High School in Harrogate has been rated inadequate by Ofsted in a report released to parents today.

The report is highly critical of the school’s leadership and management and says pupils are “at risk of harm”.

These concerns prompted government inspectors to give the school the lowest of four possible ratings in its first assessment since the school became an academy under the Yorkshire Causeway Schools Trust in 2012.

St Aidan’s was rated ‘outstanding’ at its last inspection in 2006.

Chris Ives, acting headteacher, said he “strongly refutes” the inadequate judgment but added the school “will work to fully explore potential improvements” and has “put into place additional external assurance for the areas where inspectors raised serious concerns”.

‘Good’ in most areas

St Aidan’s was rated ‘good’ in four of the five areas assessed during September’s two-day visit. They were: quality of education, behaviour and attitudes, personal development and sixth form provision.

But its ‘inadequate’ grading for leadership and management meant it automatically achieved the same overall outcome.

“Leaders have not put effective arrangements in place to safeguard pupils. Some staff do not understand the range of safeguarding risks that pupils may face, or their responsibilities to take action to protect pupils.

“Leaders have not taken timely action when pupils are vulnerable to harm. The school’s curriculum does not support pupils to develop an appropriate understanding of the safeguarding risks they may face beyond the school.

“These shortcomings in the safeguarding culture at St Aidan’s put pupils at risk of harm.”

The report, which will be put on Ofsted’s website this week, added that inspectors “identified gaps in the recruitment checks made on staff”.

It said “a few parents and some pupils who responded to Ofsted’s surveys do not feel that bullying is managed well”.

And it also said “leaders do not undertake appropriate checks on sixth-form work experience providers to ensure their suitability for students” or “consistently follow statutory guidance when there are incidents of peer-on-peer abuse”.

Chris Ives, acting headteacher, said the trust and the school knew it would be a “challenging inspection” because it was so long since the last one and Ofsted had recently recalibrated its outstanding gradings.

“That being said, the inspectors praised many aspects of school life, including the superb behaviour of pupils, the staff expertise, the overall quality of education and the wonderful opportunities available to all our pupils. Thank you and well done to all in our brilliant St Aidan’s community.

“The team of inspectors, however, felt that St Aidan’s approach to safeguarding was, in some areas, not consistently in line with best practice.

“Although leaders provided the inspection team with evidence in support of the school’s procedures and processes and were able to demonstrate that those measures were effective, the inspection team was not satisfied and drew the conclusion that St. Aidan’s pupils might be at an increased risk.

“Whilst we all strongly refute the inadequate judgement, we cannot ignore the concerns that have been raised. As always, we will work to fully explore potential improvements and we always implement advice that will help us continue to provide care that is of the highest level.

“The trust and school leaders have also put into place additional external assurance for the areas where inspectors raised serious concerns.

“The overall grade is deeply disappointing, and one that we are saddened by. What we find most difficult is that our students were a credit to themselves and our community throughout the whole process. Our staff shone in their classrooms, and our parents and carers couldn’t have done more to support the school.

“We genuinely feel that St Aidan’s is a blessing to be part of – which is why the overall grade sits at such odds with everything we experience on a day-to-day basis. We will, of course, respond fully to the report and build on all our strengths with pace and purpose so that the next Ofsted inspection fully reflects all that we believe is true about St Aidan’s.”

Ofsted highlighted the positive relationships between pupils and staff, the high expectations for pupils’ academic achievements as well as the calm and purposeful atmosphere around the school. It also praised teachers’ “strong subject knowledge” and passion for their subjects.

“It would be fair to say that the overall outcome of our inspection is highly unusual, and fills us with a mixture of pride, bitter disappointment and exasperation in equal measures.

“This is not the judgement we were expecting. We simply do not think it is right to spend significant time and effort on what would be an expensive legal process, and think it is important that the community see the report as soon as we have been permitted to publish it.”

This grading means the school will be subject to more frequent Ofsted visits and will have to publish an action plan detailing how it will respond to the concerns.

The school, which caters for students aged 11 to 18, has about 2,000 pupils in the high school and sixth form.

Ofsted ratings for high schools elsewhere in the district