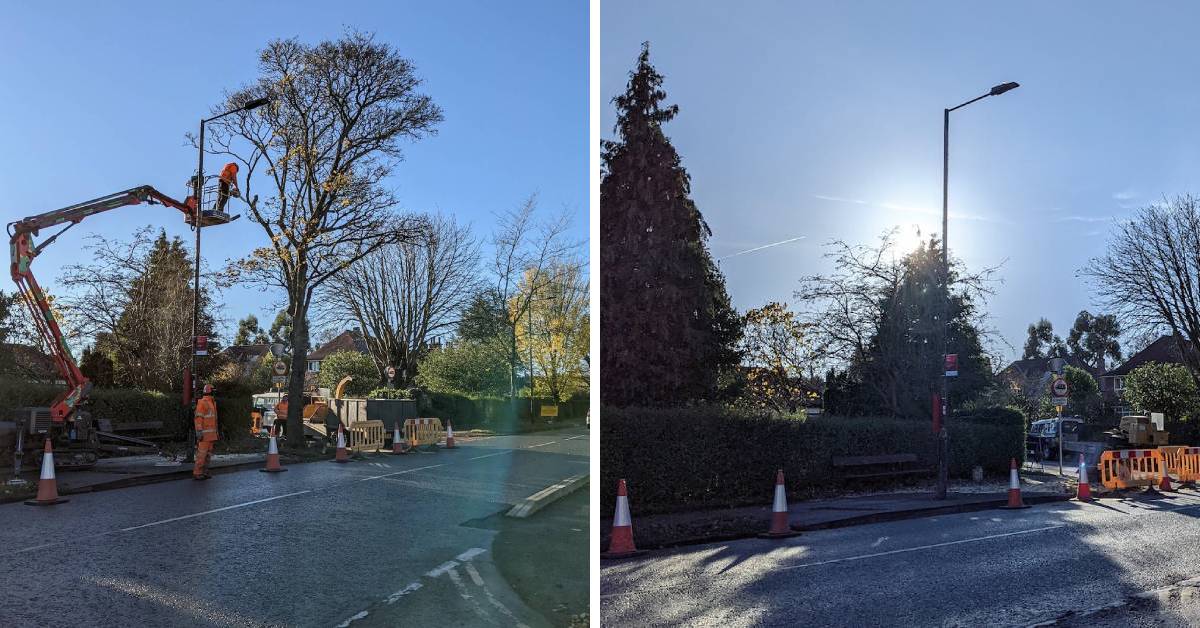 A before and after shot of the felled tree

A Harrogate resident said he is “upset and angry” because a mature tree was felled today to make way for the Otley Road cycle path.

Works have continued throughout November to build the new cycle path, which is part of a package of sustainable transport measures in the west of Harrogate.

For the first phase of the route, a section is being created between Harlow Moor Road and Cold Bath Road.

But to make way for the route, two mature trees have to be felled, including one today near Pannal Ash Drive.

Chris Dicken, who has lived off Otley Road for 35 years, said he enjoyed looking at the tree and was angry to see workers remove it this morning.

“I am intensely angry. It is a mature well-loved landmark that has been felled for minor benefit.

“They are taking a nice green environment and putting tarmac down.

The long-awaited introduction of a cycle path on Otley Road has been welcomed by Harrogate District Cycle Action as a major step forward for active travel infrastructure in the town.

However, Mr Dicken, who is a cyclist himself, criticised the “badly designed” cycle path. He believes cyclists will not be encouraged to use it because 58% of it will be shared with pedestrians.

“They said it will reduce traffic on Otley Road, but there’s no evidence that will happen.”

“To accommodate Otley Road cycle route, this is the one and only tree that has to be removed in Phase 1, with one more in Phase 2. We intend to replace these two trees with new plantings on Harrogate Grammar School and Yorkshire Water land, and we are in active discussion with both parties. We are also working with Harrogate Borough Council to plant additional trees on Otley Road; meaning there will be more trees following this scheme than there were before.

“A congestion study in Harrogate showed overwhelming public support for sustainable transport provision as an alternative to the use of the car. Otley Road cycleway is one element of ongoing projects in Harrogate to make it easier and safer for people to use active, sustainable modes of transport, such as cycling.”

Works have also taken place to widen the junction on Harlow Moor Road for motorists, which has involved the felling of ten other trees.

The police are hoping to identify the women following an incident of fraud at the One Stop on Crab Lane in #Harrogate.
https://buff.ly/3oQe1BN