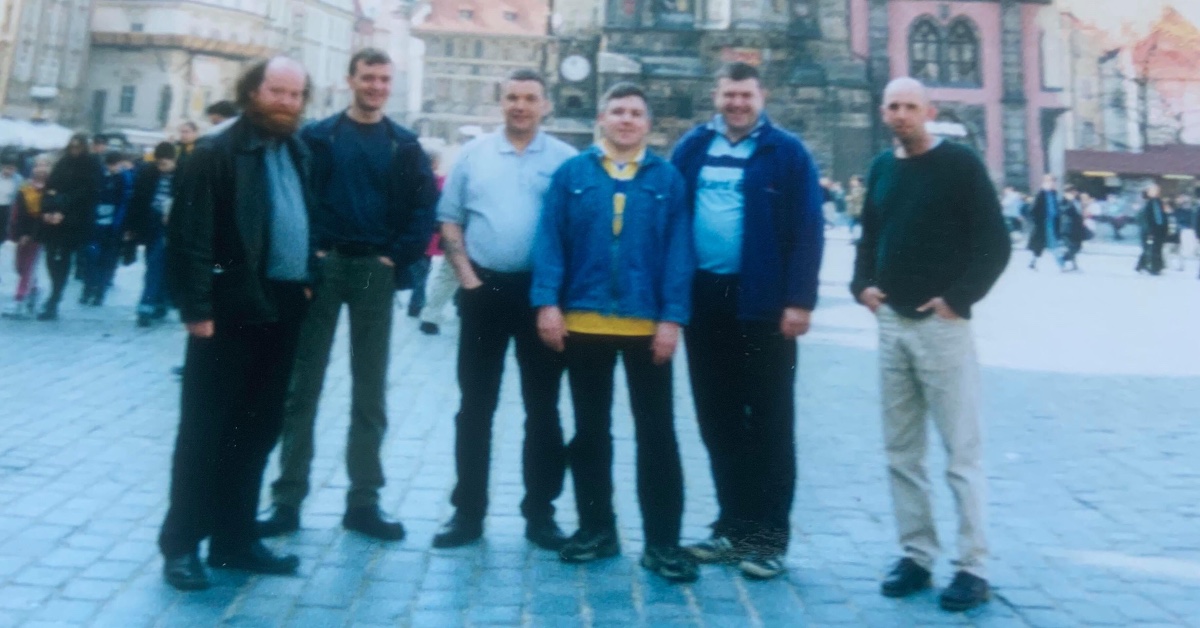 Harrogate-born Dave Rowson has seen it all at Leeds United.

After following the club home and away since the 1970s, he’s travelled the length and breadth of the country and followed United to the capitals of Europe.

Dave’s friends suggested he write the book to show what it’s really like as a fan to support the team abroad.

But, a decade of United playing in European competitions is only a snapshot of his dedication to the club.

What does it take to follow a football team around the country week in, week out and how did he do it?

After his dad took him to Elland Road in 1967, Dave was hooked on football and Leeds United.

Despite being just four years old, his first game was against West Bromwich Albion at a time when the club was on its way to success under manager Don Revie.

While his memories are fleeting of that time, Dave can still picks out the European cup nights against Celtic at Elland Road as the most memorable.

“I have fleeting memories of being in the ground and certain games, but the one I can absolutely remember is Celtic at home in the European Cup semi-final because it was awash with green and white outside the ground.

“I just remember a Scottish lad came up and wanted to swap scarfs with me. I had been about seven years old and I just said ‘no, b*****r off mate’ because it was a Leeds scarf.”

As a kid, Dave would catch the bus from the bottom of Montpellier to Elland Road with his Dad.

When his dad stopped going in 1977, Dave kept the tradition going despite the decline of the great Revie side.

“I was about 14 then and I started going everywhere even though they were not the team that they quite were, but I had grown up with them as my team.”

As an adult, he could have gone onto to university but decided to take up a job as clerical officer as part of a training course at the regional health authority in 1982. 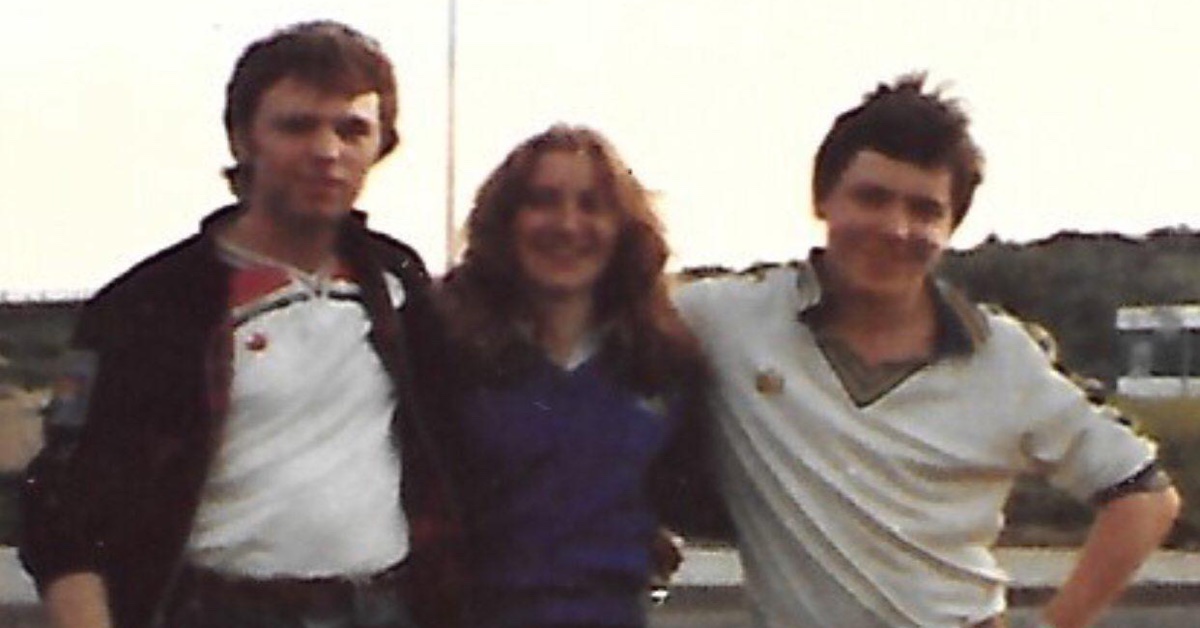 Dave pictured away at Stoke City in the 1980s.

Dave took the job deliberately as he wanted to follow Leeds home and away.

“I started earning so I could fund to go to Leeds away games, because that’s what I wanted to do.

“As daft as it sounds, life revolved around watching Leeds.”

The decision started a love affair with the club that has spanned decades.

From the club being at its most successful in the 1970s and 1990s, to the wilderness of lower division football in the 1980s, the doldrums of League One and recent rise under Marcelo Bielsa, Dave has been there.

When asked how he managed to balance his life supporting the club with work and family life, he said a lot of it came down to commitment.

As for the European nights, that required balancing leave from work and moving it to where he could fit it with games abroad.

“I just had to take it as I can and bring some leave forward.

“I don’t think I took any unpaid leave, but I would have done if I had to do.”

The highs and lows

Most of the trips across the country have come with the Harrogate and District Supporters Club.

Dave, who initially organised the bus trips under the then Knaresborough branch in the 1980s, said the days out with the supporters were one of the reasons for dedicating so much time to the club. 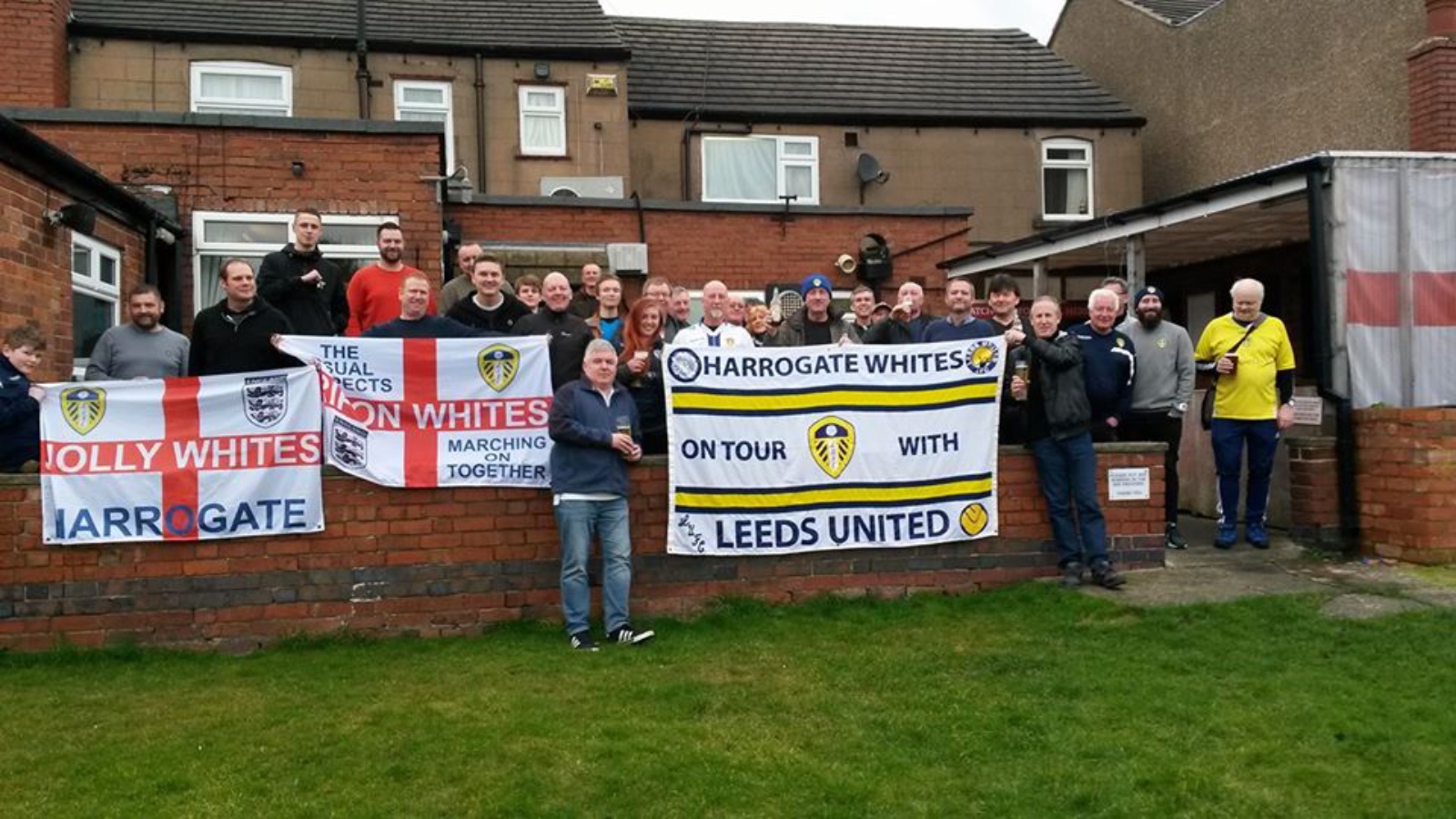 The camaraderie and joint experience of both low and high moments kept him coming back.

Among them was the chaotic game at Bramall Lane against Sheffield United in 1992, which clinched Leeds’ first title – and the last team to win it before the Premier League – since 1974.

But that year was not without its hiccups and Dave had to convince his fellow supporters that United had not blown it with five games to go.

After a surprise 4-0 defeat to Manchester City at Maine Road, Dave was convinced that the title was still within the club’s grasp.

He went as far as to write to then manager, Howard Wilkinson, outlining their final fixtures alongside Manchester United’s, who were also vying for the top spot, and explaining why the opposition would not get maximum points.

“I actually wrote to Wilkinson and said ‘have you seen their run in?’

“They had these four games and were playing Forest twice and I wrote to him and said ‘they are not going to get 12 points, I reckon they will get seven max’.”

Not content with waiting for the Lancashire side to slip up, Dave decided to go and see it for himself.

Ahead of a meeting in Peterborough for work, he realised that he could make it to the City Ground for Man United’s clash with Nottingham Forest the night before.

Despite not having a ticket and the game being sold out, he managed to convince the ticket staff that they had misplaced his ticket and was handed one from a no-show for the game.

“I got to the ticket office and I said ‘I’m a Forest fan from Harrogate’. I had bought from a stand a little Forest lapel badge and I said I had ordered some tickets.

“I gave her a name and she was looking through and she said ‘they’re not here’ and I said ‘what? I’ve ordered the tickets. I guess I’ll just go to the pub then’. Anyway, she said ‘actually I’ve got this envelope here, I don’t think these people are going to turn up’.”

Nigel Clough got the winner for Forest that night and Dave’s prediction came to fruition.

But, the forty years supporting the club has not been without its lows. 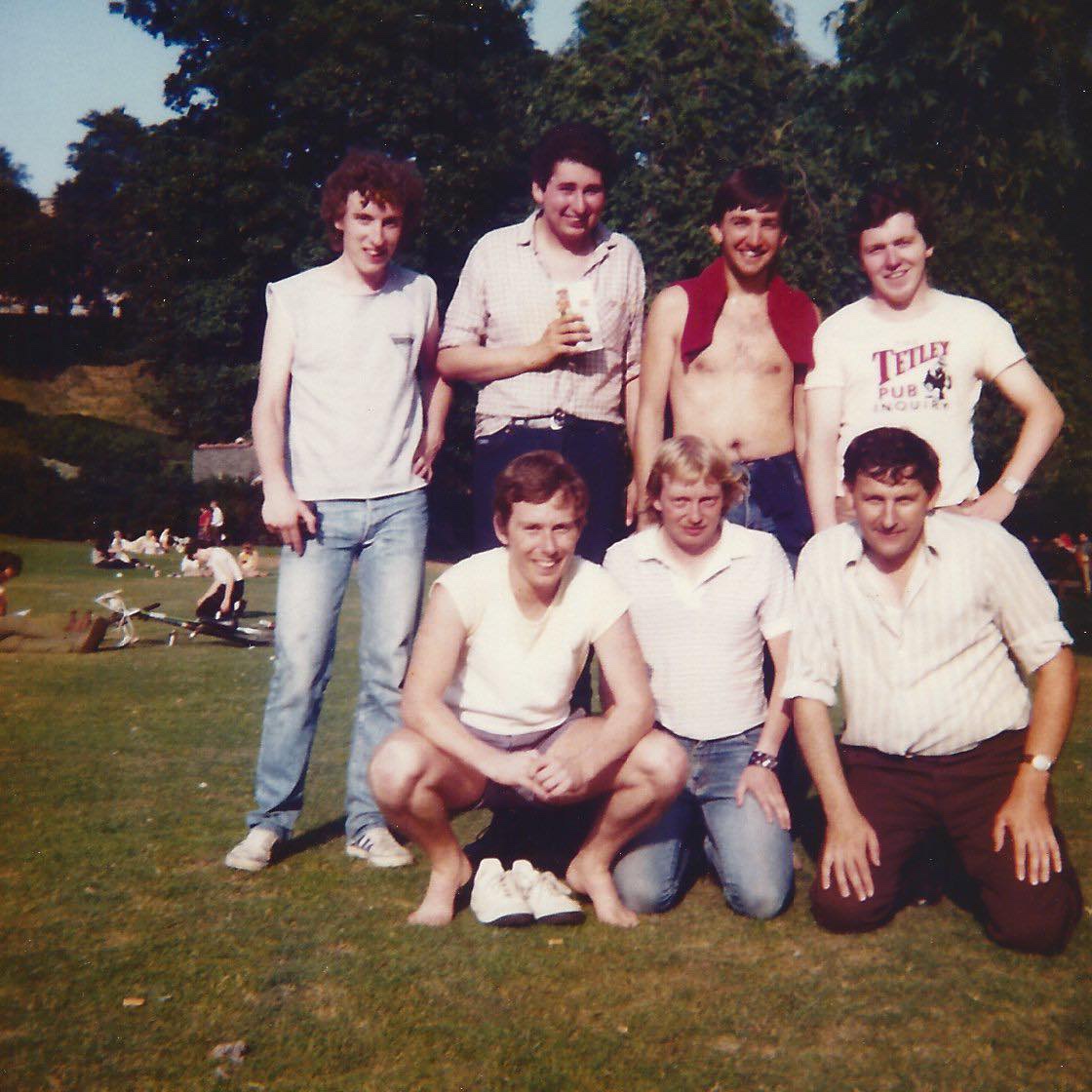 Dave pictured with friends in Edinburgh for Leeds’ pre-season in 1983.

Dave recalls the 1987 season when Leeds reached the FA Cup Semi Final and a play off final replay against Charlton Athletic at St Andrews in Birmingham.

The game went to extra time and Leeds took the lead through John Sheridan, but conceded twice in the last seven minutes to confine themselves to another season in the second division.

Dave said he had never heard a supporters’ bus so silent after a game.

“To go from seven minutes from promotion, there is only Leeds that can let two in to Peter Shirtliff.

“I don’t think I’ve ever been on a bus where not one person spoke after the game.

“We got all the way from Birmingham to Harrogate, got off and six of us went to the Blue Pot which was the drinking place at the time. We ordered the drinks and stood around the table and nobody had spoke.

“All of a sudden, someone who had not been to game came and asked if we had been to the game and it was like someone had click their fingers and we could suddenly talk again.”

‘We’re not Leeds, We are Leeds’

The European nights bring further focus into what it takes to follow the club as a fan.

From Italy to Ukraine, Dave juggled his personal life to fit in those games and to be there among the travelling Leeds support.

In his book, We’re Not Leeds We Are Leeds, Dave aimed to tell the stories of what it was like being there when United mixed it with the elite of European football.

Rather than a review of what happened on the pitch, the book highlights the people, the situations and the “daft things that happen” following your team abroad.

As part of his book, Dave has also donated £500 to Alzheimers Research UK – which the Harrogate District Supporters Branch continues to fundraise for.

Some of the journeys in Europe were memorable, such as the trip to CSKA Moscow in 1999 and the famous Champions League run in 2000/2001.

Others were memorable for things other than football.

In April 2000, Leeds travelled to play Galatasaray in Istanbul in the UEFA Cup semi final.

The game would come second to what happened before the match when two supporters, Chris Loftus and Kevin Speight, were murdered.

Dave was in Istanbul and remembers the aftermath:

“We didn’t know what had gone on until probably the next morning.

“In the end, they said the game was going ahead and we’re going to bus you to the ground. They bussed us to the ground and there was tanks there, it was surreal.”

Forty years later, Dave still follows his club home and away and says he will continue to do so when fans are allowed back into stadiums.

Last season was bittersweet for Leeds fans, who witnessed a return to the top flight after 16 years from home due to the covid pandemic.

Much like the rest of the fanbase, Dave was at home when promotion was sealed following Huddersfield Town’s defeat of West Brom and supporters flocked to Elland Road in their thousands.

“I’m just hoping that it will be like clicking your fingers and you’re back at it again.”

Until then, Dave awaits like all football fans for the moment when the government signals the long awaited return to stadiums and live games.

He will return to his habits of meeting up with lifelong friends, having a drink and taking the well-trodden journey to Elland Road week in week out.

But, why and how does he do it?

“I can almost imagine never not doing it. A lot of my best mates I have met through the football and it’s like a community and a family.

“You have some right laughs and it takes you away from everything. Whatever troubles people have had, they go to the football and it gets it out of their system.

“I’ve known some people for 50 years watching football. There’s nothing better than it for me, a day out with the lads and a laugh.”

You can donate to the Harrogate Leeds United Supporters’ Branch fundraiser for Alzheimers Research UK here. Dave Rowson’s book, We’re Not Leeds We Are Leeds, is available to buy here.