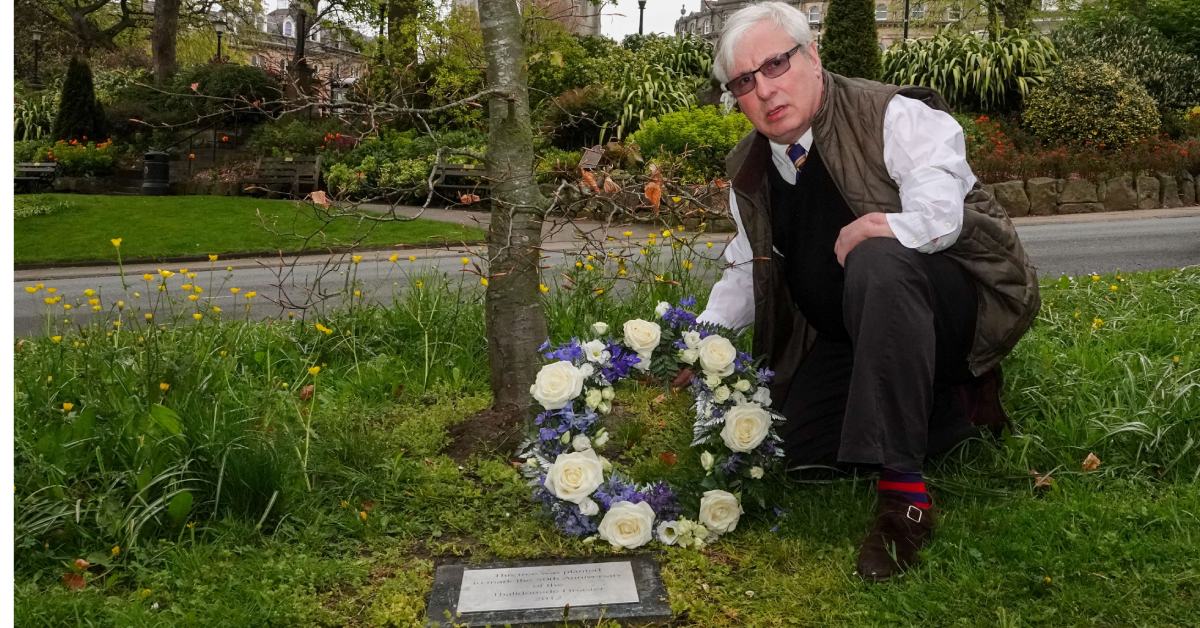 Harrogate Thalidomide campaigner Guy Tweedy has laid a wreath to pay tribute to victims of the morning sickness ‘wonder drug’.

Mr Tweedy placed the wreath at the foot of a copper beech tree planted on the Harrogate’s Montpellier Hill in 2012.

The tree was the UK’s first-ever memorial to those who died as a result of their mothers being prescribed the drug in the early stages of pregnancy.

The wreath commemorates the 60th anniversary of the Thalidomide Society, which was formed in 1962 by the parents of children affected by the drug.

Mr Tweedy, who turns 60 in June and is himself a Thalidomider, is a prominent campaigner for the society.

The society was formed by parents of children affected by the drug in order to provide mutual support and seek compensation.

At least 2,000 babies in the UK were born due to Thalidomide, and more than half of them died within their first year. An unknown number also died in the womb.

There are a total of 442 Thalidomiders aged between 56 and 63 still alive in the UK today.

Over the last two decades, Mr Tweedy – who sufferers from shortened arms and fingers fused together, has helped secure hundreds of millions of pounds from the government for the ongoing care of fellow survivors.

“A decade ago, we planted this tree to commemorate those who died from this hideous drug. Thalidomide was the worst man-made disaster in peace time history.

“It killed thousands of babies in the womb and in their first years of life. It left thousands more with terrible deformities and affected the lives of thousands of families around the world.

“For the last ten years I have watched the memorial tree grow – and it will be here long after I, and all the other Thalidomide survivors, have passed away.

“The Harrogate district has seven thalidomide survivors, and since its inception 60 years ago the Thalidomide Society has fought our corner and championed our welfare.

“Whilst this wreath is to commemorate the victims of this tragedy, it’s also to recognise the ongoing work of the Thalidomide Society which aims to ensure the impact of thalidomide is never forgotten.