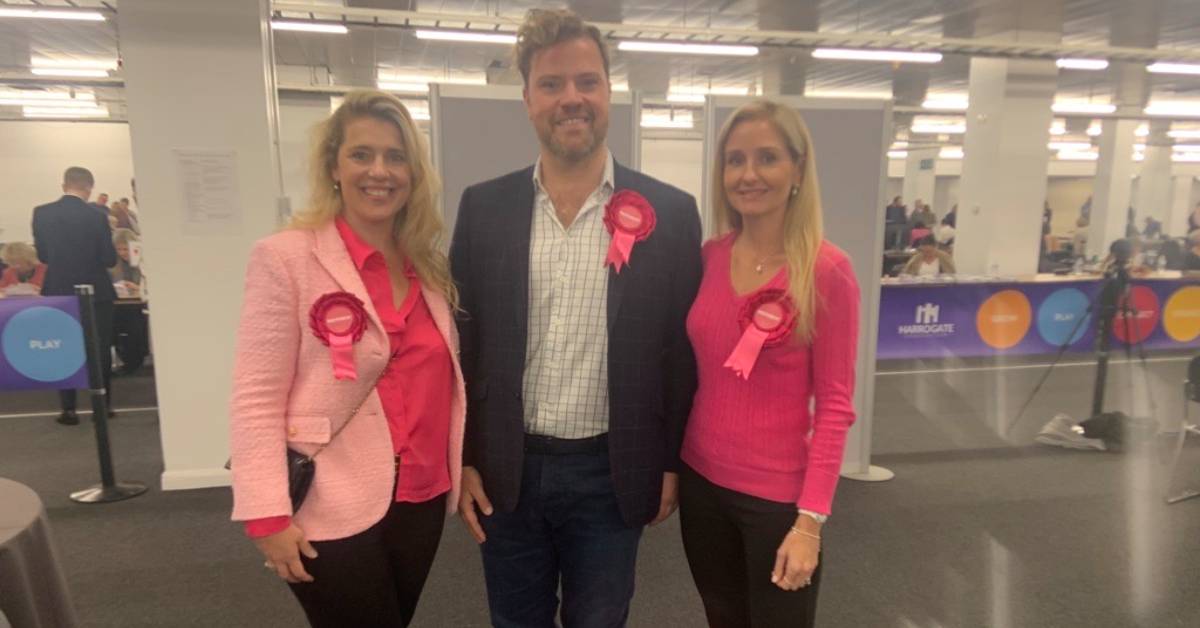 (from left) Lucy Gardiner, Daniel Thompson and Anna McIntee at the election count.

A group of five Independents has vowed to stand in future elections after they failed to win a seat on the new North Yorkshire Council.

Using the motto ‘Time for a Change’ and sporting pink uniforms, they pledged to put a stop to housebuilding in the area and oppose transport schemes like the Harrogate Station Gateway.

In the end, the district’s electorate voted for change, but it was the more familiar yellow of the Liberal Democrats that they chose.

But during their concession speeches at the election count, Ms Hart, Mr Thompson and Ms Gardiner all suggested they’d stand again in future elections, with a potential Harrogate Town Council on the horizon.

It was a disappointing set of results for the Independents, in contrast to the strong showing by Independents in Ripon.

Over the past couple of years, thousands of people signed petitions set up by Anna McIntee and Lucy Gardiner to oppose the Oatlands Drive one way scheme and the Beech Grove Low Traffic Neighbourhood.

However, they weren’t able to translate successful petitions into votes.

Ms McIntee came fourth in her division with 167 ticks next to her name.

Ms Gardiner and Ms Hart fared better, receiving over 300 votes each, but they didn’t come close to beating the victorious Tory and Lib Dem councillors they were up against.

The five candidates met for a debrief last week where they reflected on the campaign.

Ms Gardiner said they were disappointed to see “the same old faces and old ideas being returned for another five years”.

“We were not just paper candidates but true representatives of the community, sharing many of the main issues as the residents and businesses, too many houses, no proper infrastructure, increase in congestion with no realistic solutions, pocket planning, all the wasted money on vanity projects, to name a few.

“It is disappointing that we didn’t get the majority and it was a shame there wasn’t an Independent candidate for every seat. However, considering we had no party machine behind us and none of us had ever stood before, we didn’t do too badly.”

Mr Starkey said he was disappointed by the low turnout.

“An average of only 36% voted and many still voted for the ‘party’ rather than the ‘person’, so we have to ask ourselves why?
Is the thought process ‘let’s give them another chance’, ‘I’ve always voted the same’, ‘it’s time for change’, or ‘what’s the point?’”

Before the election, it was difficult to predict who would vote for the ‘Time for a Change’ five.

Would it be disgruntled Conservative voters? Or people who don’t usually vote but who were attracted to their anti-establishment message?

The Conservatives failed to win three of the five seats where the independents stood.

These included the current deputy leader of Harrogate Borough Council, Cllr Graham Swift. He came a close second in the Coppice Valley and Duchy division, in a big upset for the Lib Dems.

Ms Gardiner said they succeeded in part of their aim of getting “the wrong people out”.

“We may not have succeeded by getting in but we certainly opened up the conversation and put the cat amongst the pigeons seeing a few key Conservatives in ‘safe’ seats voted out.”

“The Conservatives have been in power for years and their only legacy is a shambolic local plan favouring the pockets of the national house builders, pocket planning with multi million pound cycling lanes going nowhere and the (reported) £17 million vanity project that is the Civic Centre.”

Following the abolition of HBC next year, it’s expected that a Harrogate town council will be set up to potentially manage local assets such as the Stray and Harrogate Convention Centre.

Elections could take place in 2024, and Ms Gardiner said the independents want to ensure Harrogate has a strong “community” voice, free from the shackles of party politics.

“Our efforts weren’t in vain, the independents aren’t going anywhere and we will strive to ensure Harrogate and Knaresborough doesn’t get swallowed up by the new North Yorkshire Council.

“We must not be led by politics, we must be led by the community and have a town council with the right people at the helm.”