0 Items
Is Brexit to blame for Harrogate’s hospitality jobs crisis?
by 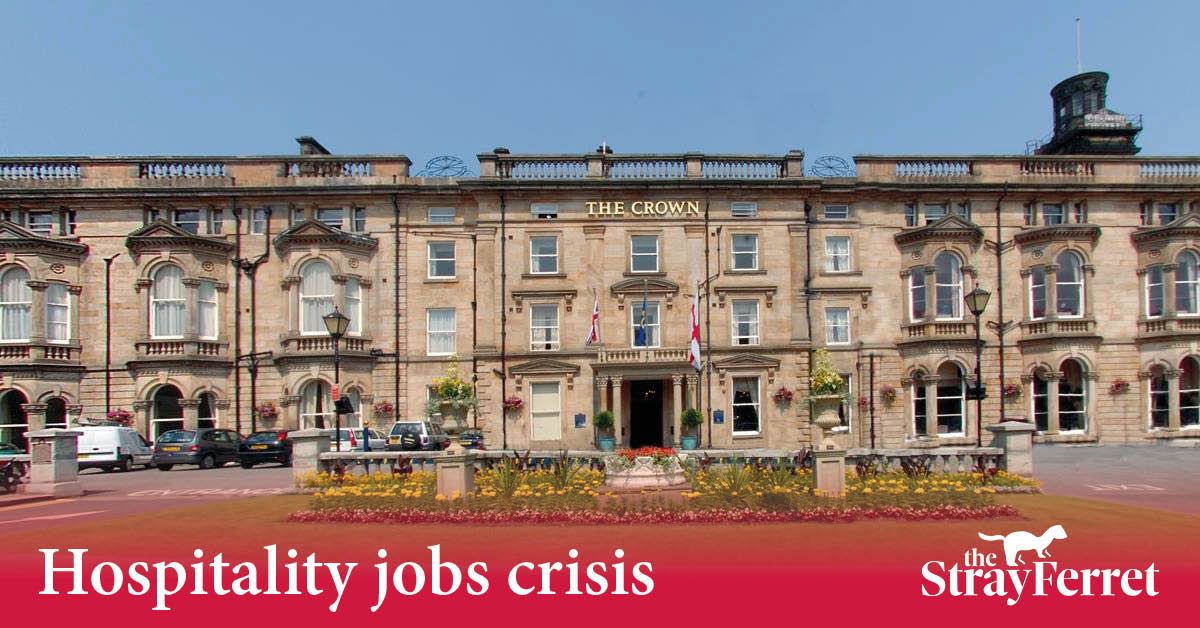 Some people believe the equation is simple – the 2016 referendum led to Polish bartenders or Spanish housekeepers deciding to leave Harrogate and return to their home countries. But is it that simple?

The statistics appear to back up the theory.

According to latest ONS figures, the number of non-British residents living in the Harrogate district has halved from its peak of 14,000 in December 2014 to 7,000 in December 2019 — and the covid pandemic has undoubtedly hastened a further exodus since then.

Dan Siddle is the general manager of the Crown Hotel in Harrogate which has been employing chefs, housekeepers and waiters since the 19th century.

The hotel has a workforce of 50 and Mr Siddle said recruiting currently is “the hardest I’ve ever known it” due to a perfect storm of factors, including Brexit and covid.

He told the Stray Ferret the hotel lost several members of staff from the EU that have been difficult to replace.

“Those eastern Europeans had been here a long while. They were my supervisors but they chose not to come back to the UK. That’s three or four important roles. “

However, he thinks “we don’t have to rely on people from Europe” and can employ people locally if they offer an attractive package.

The hotel has raised the hourly wage for housekeeping staff to £10 an hour, has begun to offer roles that come with accommodation and is paying transport costs from Leeds.

He says hospitality is “a fantastic, great industry to work in” but the perception of tough working conditions needs to improve to attract UK workers.

“[The jobs crisis] has given the industry a kick up the behind. We need to change the way we work. The perception didn’t come out of nothing.”

Lisa Headford is the branch manager of Travail Employment Group, an employment agency based on Princes Street that recruits front-of-house and catering positions across the district.

She told the Stray Ferret that the office is busier than ever and they are having to turn hospitality businesses away because they simply don’t have enough employees on their books to fill roles.

“Everyone is looking for staff. We get calls every day. We have learned to say, ‘we cant help you, we’ve exhausted our resources’.”

However, Ms Headford believes it’s overly simplistic to blame Brexit on the recruitment crisis in hospitality.

“It’s not definitive. We’ve had a number of people come back to Harrogate from Poland as during the lockdown they didn’t have a permanent job, and they wouldn’t have got furlough. They are now gravitating back.

She said the lockdowns have forced many people who worked in hospitality into jobs with more sociable hours — and they’ve liked the change.

“We had a lot of casual chefs but they’ve become a delivery driver and they haven’t gravitated back.”

Ms Headford said that despite Brexit, Harrogate is still a “very multicultural town” with working families from across the EU.

“These people have been established for a very a long time and are part of our town.”

Tomorrow we’ll be reporting on the views of hoteliers and bars owners in Harrogate on what they think should change to attract local talent.