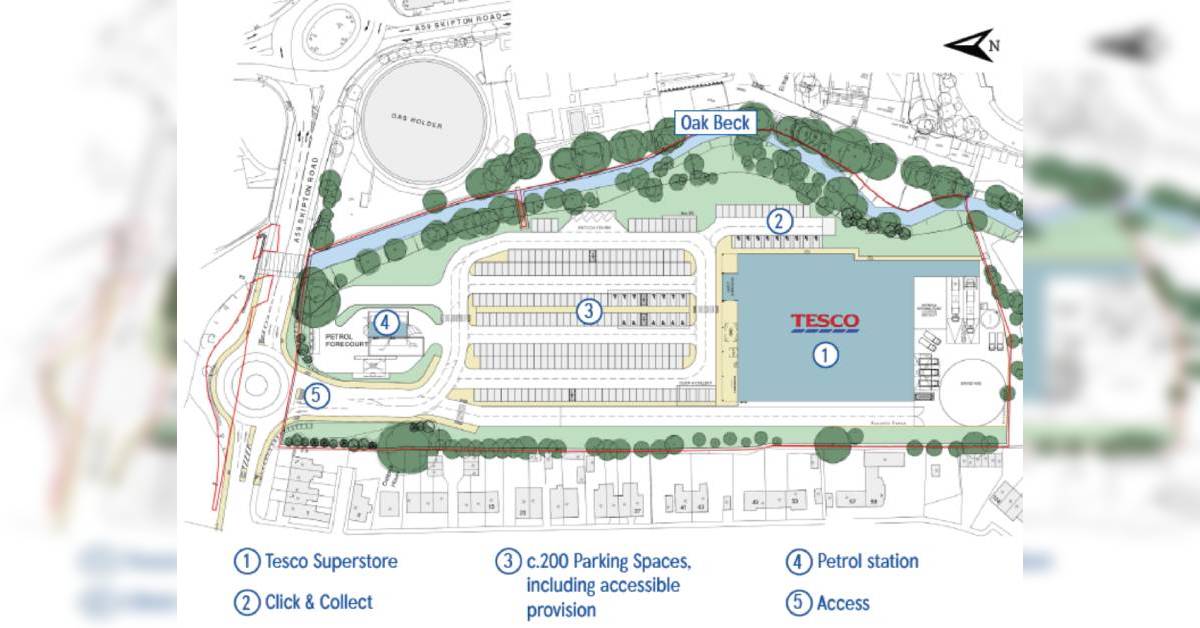 How the site would look.

Tesco has today launched a public consultation on plans to build a major new supermarket on Skipton Road in Harrogate.

The Stray Ferret revealed this month that the company had revived plans to open a supermarket on the former gasworks site close to the New Park Roundabout.

Further details of the proposals have now been published on the consultation website.

The new store, which is yet to be granted planning permission, would be 38,795 square feet and include a petrol filling station, 200 car parking spaces, electric vehicle charging points and 24 cycle spaces. Tesco says 100 new jobs would be created.

For access, a new roundabout would be created on Skipton Road.

The supermarket would be built here on Skipton Road

“The proposals for this store are significantly different to the previous planning consent.

“A new planning application will be submitted and if granted, Tesco will start construction as soon as possible.”

There has been an unprecedented level of housebuilding on Skipton Road and Killinghall in recent years and Tesco said the new supermarket would help reduce car journeys across Harrogate.

“We are delighted to share our plans with the public for our new store and we look forward to hearing the views of local residents.

“We know there is demand for a new supermarket in the north of Harrogate and this store will meet the needs of the local community.

“This will be fantastic new store which will provide a wide-range of high-quality food and non-food goods, cater for all budgets and deliver benefits for the local community.”

The public can comment on the proposals here until October 10.

Tesco has harboured ambitions to build a supermarket on the site for almost 20 years.

The Stray Ferret obtained Land Registry documents that reveal Tesco bought the site for £2.8m in 2003.

It submitted a proposal to build a supermarket there in 2009, which was approved by Harrogate Borough Council in 2012.

However, Tesco pulled out in 2016 following a changing retail landscape and years of opposition from retailers, which said the supermarket would damage local trade. An Aldi supermarket opened on the retail park just off Skipton Road in 2016.

In 2021, Tesco has signalled its intention to return to opening new large-scale supermarkets in the UK.

This year, it opened its first new superstore in six years in Penwortham, Lancashire. Four more supermarkets are scheduled to open this year.