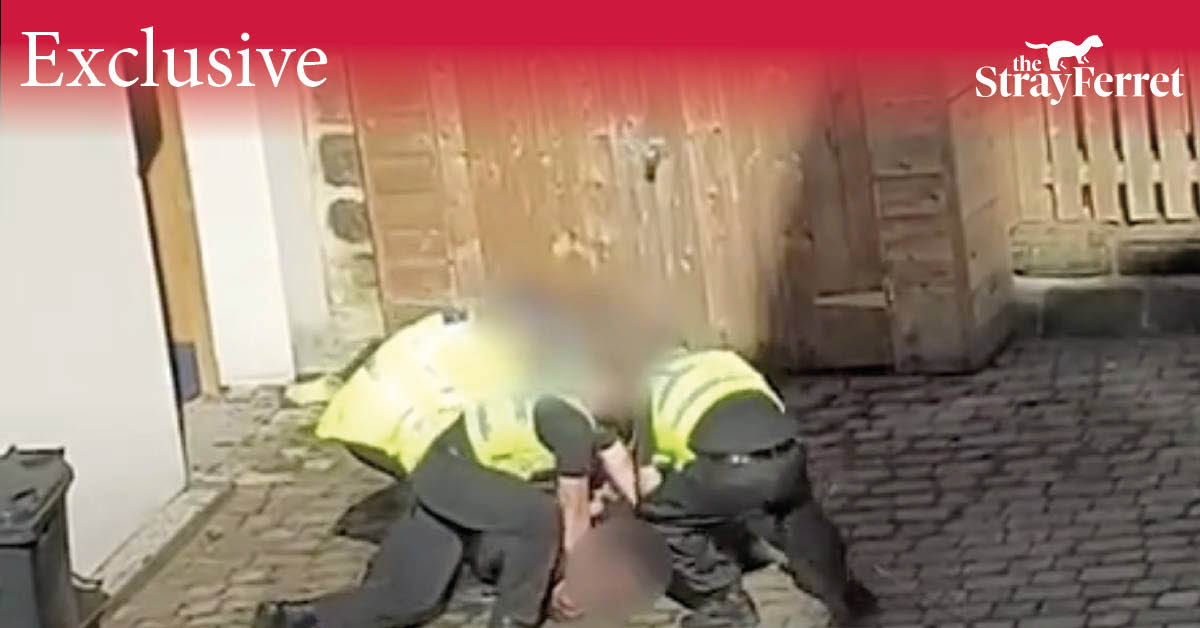 The Stray Ferret has obtained a video of North Yorkshire Police officers appearing to knee a man and then punch him three times in Harrogate.

The clip shows four police officers attempting to hold the man down while he shouts “get off”.

One officer then appears to knee the man in the head before another officer appears to punch him in the stomach three times.

North Yorkshire Police has said the man was making threats to kill.

The video was filmed in a secluded courtyard in Harrogate town centre by Stephanie Tate on Friday October 1 at about midday.

Ms Tate told the Stray Ferret she decided to film the incident after watching the altercation and becoming concerned about the police’s approach.

She said what she witnessed was “shocking” and made her feel “sick to my stomach”.

“I could hear shouting and thought someone was getting attacked.

“It was really heavy-handed. He was shouting ‘get off, get off’.”

Ms Tate said it did not appear to her that the officers were using reasonable force. After restraining the man, police took him away in a van.

“I feel they already had him restrained and there was no need to punch and kick him.”

A spokesperson for North Yorkshire Police said it was reviewing the conduct of the officers involved.

“At around 11am on 1 October, officers on proactive patrol in Harrogate located a man who was wanted on suspicion of making threats to kill following reports of a man entering Harrogate business premises and being abusive towards staff, including lone women.

“The man did not comply with the officers and they used force to arrest him.

“He was arrested on suspicion of making threats to kill and obstructing/resisting a police officer. He remains on police bail while the investigation continues.

“We are aware of a video circulating on social media showing part of the incident and a review of the footage is being carried out by the force’s Professional Standards Department regarding the conduct of the officers.”