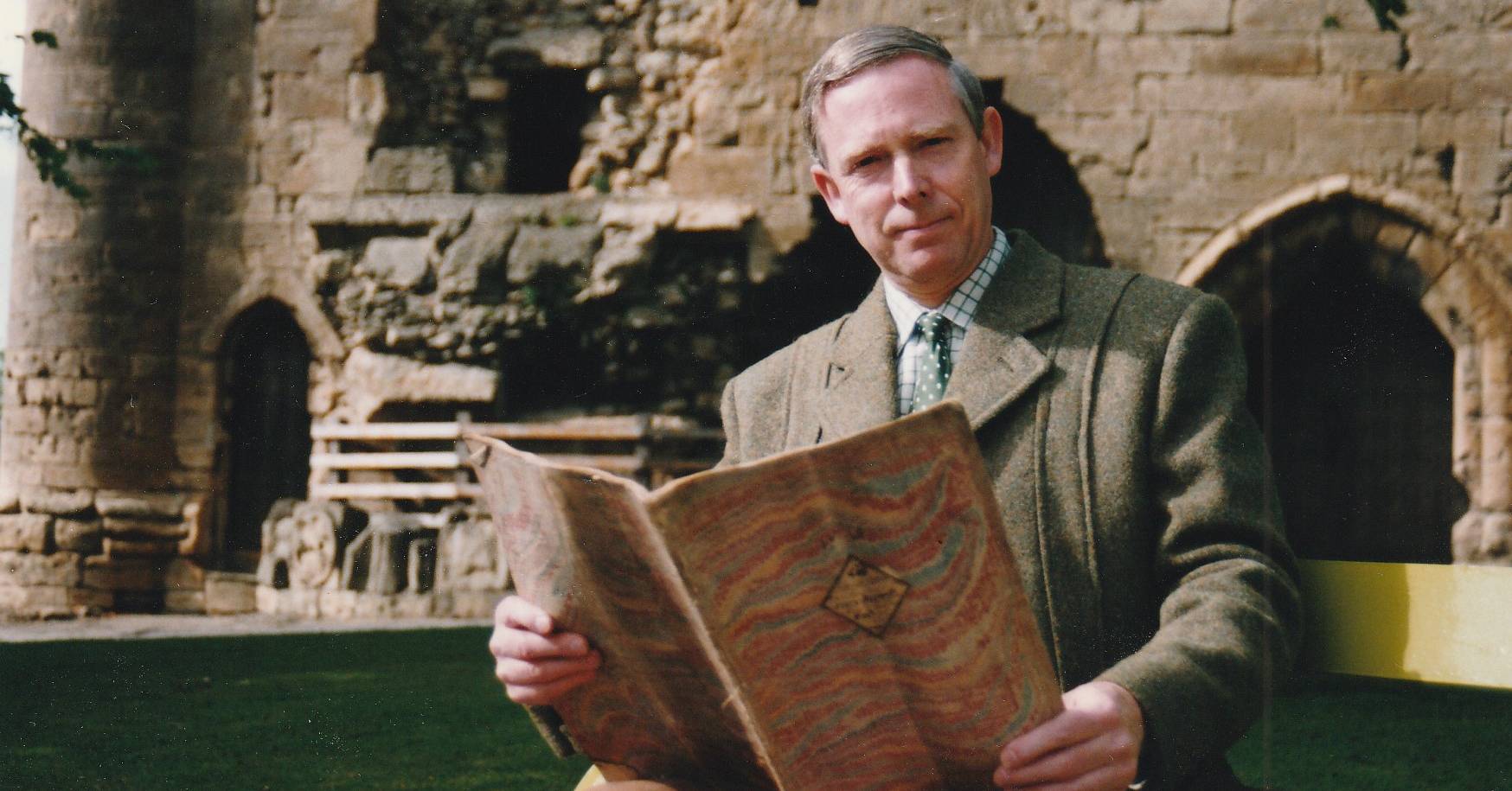 Macolm Neesam pictured in 1995 at Knaresborough Castle with his discovery of Duchy Records.

This article is written for The Stray Ferret by celebrated Harrogate historian, Malcolm Neesam.

It was in 1997 that the Duchy of Lancaster asked my help in tracing some of their most important missing archives relating to Harrogate and the former Royal Forest of Knaresborough. At one time, all of these records were stored at Knaresborough Castle, but during the Civil War, the records were removed and stored in adjacent buildings until they passed into the hands of the Understeward for the Royal Forest, Samuel Powell, when they were filed in the former old School House, next to the Castle, and where for many years the firm of Powell, Eddison, Freeman and Wilks had their offices.

These archives consisted of the records of the Royal Forest of Knaresborough, mostly in the form of rolls of court proceedings recorded on vellum or parchment. They ran from earliest times through to the reign of Charles 1st, and the Civil War, as well as following centuries. In 1925, a change in the law caused the Duchy to remove the pre-Charles 1st archives to London, where they were deposited in the Public Record Office in Chancery Lane. The post civil war material, however, remained with the Understeward in Knaresborough, where it was kept in the loft above Powell Eddison’s office. Over the decades, the Duchy archives were mixed with the records of the firm, and gradually became hidden under the piles of records that such an eminent firm as Powell Eddison’s inevitably created.

The Duchy material consisted of wills, land and property transfers, income from Duchy holdings, including farms, indentures for various services and agreements, letter books, surveys of land and property, maps, and various correspondence about grants and property. It was a treasure trove of life in the Royal Forest and greater Honour of Knaresborough. As such, it was of paramount interest to the Duchy to have access to it for the running of their modern business, which still involved them with considerable property holdings in the locality. Thus it was that armed with the Duchy’s request, and with the full permission of Powell Eddison, I climbed the ladders that led to a trap door opening into the loft of the former Old School House.

I was immediately faced with clean parcels of the firms own material, but beyond them on a series or wooden racks were many very much older parcels and volumes, the first one of which was a volume of Court records from 1623! Bingo! Next, I picked up a tube containing the hand-drawn proposals for the Great Award of 1778, which laid out the Stray. Then, a huge volume with the 1830 Scriven and Scotton enclosures. This was indeed the Duchy’s missing material, which was subsequently sorted from the material belonging to the firm, and  eventually removed to the Duchy Office in London before being mostly deposited in the new National Archives at Kew, mostly under classes D.30 and D.31.

I have in my life had only one “Indiana Jones” moment, and that occasion when I found the Duchy Archive was that moment, and for me, the find was infinitely more precious that all the golden relics or artefacts in the world, as it was lost knowledge, refound.

The Stray Ferret has worked with Malcolm Neesam to produce two fantastic history audio tours of Harrogate.  Both last about an hour and are easy to do. The first will take you back to the golden age of Harrogate’s Victorian Spa days, the second will take you through the heart of the shopping district, stopping to learn about historic buildings as you go.  To take a look click here.

Malcolm has also recently published a second major history of Harrogate. “Wells and Swells” covers the town’s Victorian heyday from 1842-1923. To find out more and how you can order a copy, click here.

A new 'HG1 for Everyone' mural has appeared on the former Post Office on Cambridge Road in Harrogate.