0 Items
The key questions facing Harrogate after devolution
by 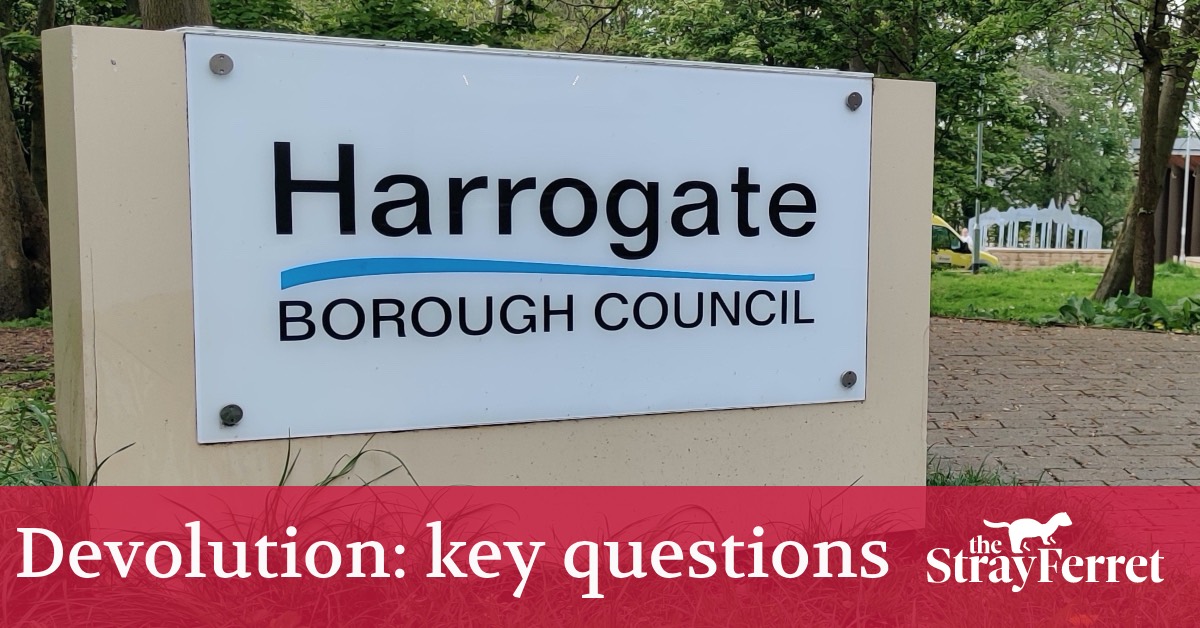 The announcement that Harrogate Borough Council will be scrapped and replaced by a super council for North Yorkshire raises many key questions.

Major assets, such as Harrogate Convention Centre, will fall under new control. One of Harrogate Borough Council’s last acts could be to spend £46.8 million on refurbishing the convention centre.

More than a thousand council employees face the uncertainty of being transferred or made redundant when the new super council comes into existence.

The Stray Ferret requested an interview with Wallace Sampson to ask how the council is preparing for such seismic changes, and what could be done to prevent council taxpayers funding a zombie council beset by staff departures and looming extinction. However, we did not receive a response.

Here are some of the key issues that need to be addressed.

Will the £46.8 million refurbishment of Harrogate Convention Centre proceed?

Last year, the borough council announced a major investment into the HCC – among the highest in recent memory.

A spend of £46.8 million was outlined by the council last year to renovate the building.

Councillors backed a feasibility study into the plans ahead of a final decision on the investment.

But the authority told the Stray Ferret earlier this month a vote on the investment would not be made until 2022 when detailed designs and costs can be presented to councillors.

The move raises the question over how the the announcement of the reorganisation would affect the planned refurbishment of the HCC.

The borough council told the Stray Ferret earlier this month that reorganisation of local government and investment “are two entirely separate things”.

The reorganisation could also have implications for the council’s new Destination Management Organisation.

The new body created by the council will bring together Visit Harrogate, Harrogate Convention Centre’s marketing team, and the district’s tourist information centres.

It has just spent £165,000 on a new website for Visit Harrogate which covers the district.

It is unclear how this will fit into the new unitary authority and its tourism plans.

Who will run the swimming pools and leisure centres?

On August 1, the borough council will hand over the running of leisure facilities to an arms-length local authority controlled company.

The company will already be in charge of the facilities before the unitary exists which raises questions over how it will operate under the new structure.

What will happen to Harrogate Borough Council’s offices?

The future of the newly built council offices on Knapping Mount in Harrogate is also in doubt.

Given that the borough council will no longer exist, it raises questions over how the building, which the Stray Ferret revealed last year had a total cost of £17 million, will be used.

The authority disputed the figure, saying the building cost £11.5 million but it did not include in its figures the value of the land on which it was built.

Wallace Sampson, chief executive of the borough council, told the Stray Ferret in March that the reorganisation would not affect the use of the civic centre.

“Harrogate has modern purpose-built offices with flexible use built with very high energy-efficient standards. It puts us in a really good position with local government reorganisation to ensure there are offices devoted to service delivery within Harrogate.”

Beyond this there are wider questions as to how the district council will operate in the transitional year, how it will retain staff and management during this period, whilst continuing to provide services.

These are critical issues that the public will want answers to in the coming months.

Zero Carbon Harrogate is calling on new county councillors to focus on making the Harrogate district "climate ready and resilient".